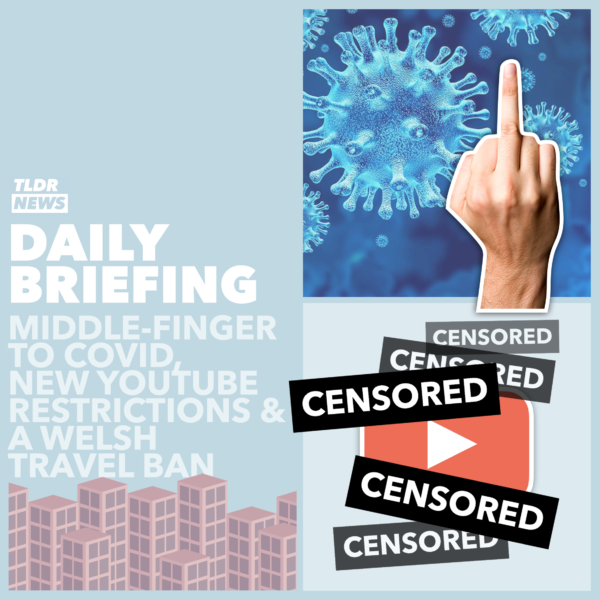 October 14th: A Middle-Finger to COVID, YouTube Restrictions and a Welsh Travel Ban

A Middle-Finger to COVID

How annoyed does it make you to see people openly flouting the rules designed to stop the spread of the coronavirus? Do you want to display your dismay at their actions, or does it not bother you? Well, authorities in Berlin clearly subscribe to the former course of action – as is demonstrated in their public awareness campaign.

In one of their more outlandish adverts, an elderly woman is seen giving a middle finger to the camera, next to some German text, which translates to: “The middle finger is for everyone without a mask. We comply with corona rules”.

Although some soundbites from ministers in the UK also focus on elderly people – with the infamous “don’t kill your gran” immediately springing to mind – it’s clear that the Germans have taken this in a different direction.

Hopefully, the advert will prove effective and those openly flouting the facemask rule will buck their ideas up.

In the second story today, while the virus has been spreading globally, YouTube has introduced some restrictions to try and stop the spread of something else: misinformation. While some channels try to convey information from governments and health officials (not mentioning any in particular…) some are using the platform to spread misinformation about a whole host of things – from vaccines to lockdowns.

Although the platform has already committed to banning videos that make “medically unsubstantiated claims”, it has now pledged to take down any videos that go against the consensus from health authorities – such as the NHS or WHO.

Some will praise these changes, as they could protect the health of the wider community, through stopping people coming across dangerous information. Others, however, will see it as an attempt to stop debate, and push a narrative that YouTube deems acceptable.

In the last story in the briefing today, Wales has banned people from England that live in coronavirus hotspots from travelling into Wales. The changes were announced by Welsh first minister Mark Drakeford.

He claims that he has asked the Prime Minister twice in the last few weeks to tell people in the worst affected areas in England not to travel to Wales. However the Prime Minister has, instead, opted to ask people living in those areas to avoid non-essential travel. Clearly, this was not enough for Mr. Drakeford.

Nicola Sturgeon has indicated her support for Mr. Drakefords plans – signalling that Scotland could follow suit.