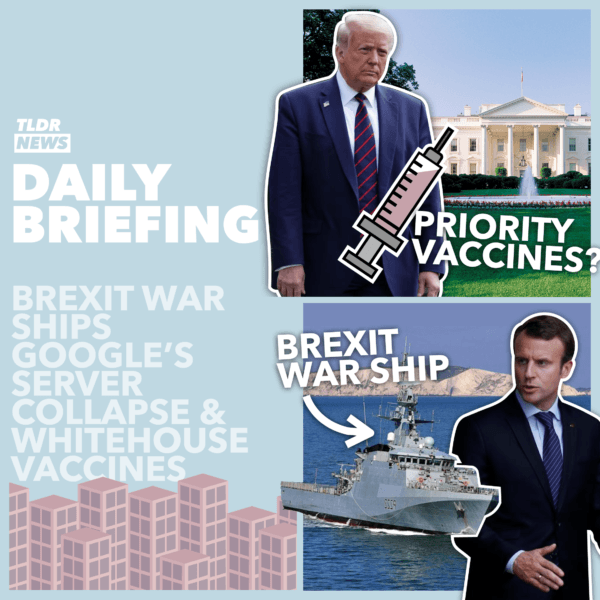 In the first story of the briefing today, we discuss the President’s plans to move the White House staff down the list of those who are eligible for the coronavirus vaccine. It was only yesterday that officials claimed that house who worked in close proximity to the President (and other senior government officials) would receive the vaccine swiftly. Clearly, this was an attempt to stop the virus spreading through the heart of government.

Two key arguments could be made in the favour of such a move. First, this would demonstrate to the American public that the vaccine is safe, and that leaders and staff alike feel comfortable taking it. The hope would inevitably be that this would inspire confidence in the vaccine in the wider public.

The second key argument is that this would protect the continuity of government. Put simply, during a pandemic, the executive gains a lot of power. And, as the old adage goes, with great power comes great responsibility. The government has a lot to deal with at the moment, and steering a country through a previously unthinkable pandemic is difficult as is. It would become even more difficult if members of staff keep requiring time off work.

However, there were also counter arguments – which were largely raised by social media users. The main argument against such a plan is that of fairness. Why should government make themselves safe before anyone else?

Well, it appears that following such backlash, the President has made a u-turn. He Tweeted:

“People working in the White House should receive the vaccine somewhat later in the programme, unless specifically necessary”

In the second story in the Daily Briefing today, we talk about a story that broke over the weekend. While talks are now set to continue between the EU and UK, it has become clear that a No-Deal Brexit is certainly on the cards. The Prime Minister has already advised businesses to begin preparations for such an event.

In such an event, British fishing waters would only be legally accessible by British fishing boats. This is because the EU and UK have an agreement in the EU (which has been extended through the transition period) to share territories for fishing. Exactly how to untangle these agreements remains the biggest sticking point in the negotiations between UK and EU leaders over the last week.

Now, you may be wondering exactly how the government plans to protect British fishing waters if negotiations fully collapse and we end up with a no deal. Well, it’s obvious isn’t it? Put military gunboats in the water to threaten French fishermen!

Nope, we’re not joking. That’s the honest solution the government has come up with. The Ministry of Defence has called this solution a “robust enforcement” of the fishing waters policy. It should be noted at this point that ships are used in the EU already to enforce the rules, but navy gunboats seem to be an escalation.

We’ll have to see exactly whether the government manages to negotiate a deal or whether they will have to resort to the gunships idea.

In the final story of the briefing today, we get a bit meta. For those of you who don’t know, we write the Daily Briefing on Google Docs – which, once written, is shared among the team for comments and feedback. Just as we were in the process of finding the topics today, we tried to start the document so that we could write them up. But, for some reason, we kept getting errors.

It turns out that we were in the middle of a rare Google outage. The Google Drive suite wasn’t the only thing affected. YouTube, maps, the Google Play store and Google Home devices were all affected. In fact, one of the only things that wasn’t affected was the Google search feature itself.

This outage has caused disruption across the globe. One of the more disruptive problems was related to Google Home. Some were unable to turn lights on in their house as they were solely controlled by a Google Home device. Some social media users have claimed that this outage has given them a lot to think about.

The outage only lasted about thirty minutes and it is as yet unclear what the issue was. A Google spokesperson was contacted by the BBC for comment, but was unable to respond due to Gmail being down.

And combining those last two stories, our recent video about Johnson’s apparently oven ready Brexit deal was hit by the outage, impacting the number of people it reached. So if you want to lend us a hand check out that video and even consider sharing it with your friends. Thanks!