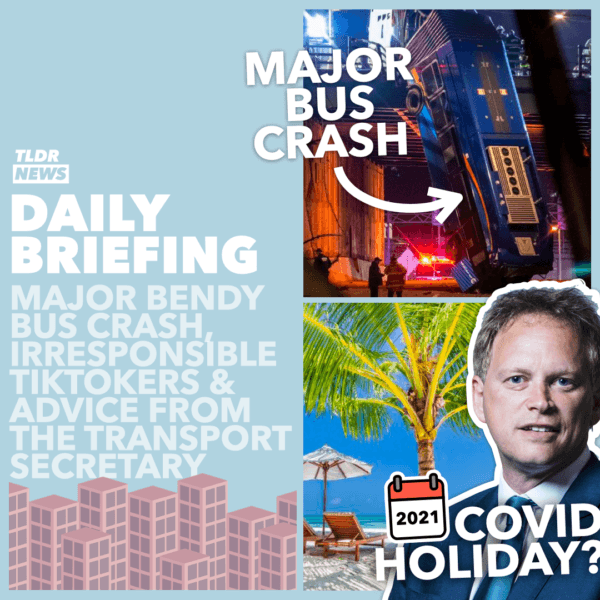 January 15: A Bendy-Bus Crash, Irresponsible TikTokers, and Advice from the Transport Secretary

Before we start today’s briefing, a super quick request from us. As you probably know, we just stated the TLDR Global Channel – where we’re set to post a bunch of international stories – but one video we want to make will answer the question, which country has the best flag? So we need your votes. Linked here you’ll find the survey where you can vote on a bunch of flags (don’t worry you don’t need to do all of them, and your votes will decide the winner). Also make sure to click the link to TLDR Global and subscribe so you can be notified when the results video goes live.

In the first story of the briefing today, we discuss the news that a bendy-bus fell off a New York overpass last night. Images were posted to social media by the New York Fire Department of the front half of the bus dangling from the overpass, while the other half remained parked on the road above. This was a fall of about 15 meters, or about 49ft.

Unfortunately, it has been reported that 8 people were injured in this incident – including the bus driver, who is reported to be in a serious condition.

It is not clear what caused the incident yet. We wish all of those involved a swift recovery.

For the second story today, we talk about TikTok. Don’t worry, we’re not going to start reporting on TikTok dance crazes or anything anytime soon – well, unless Jack starts making TikTok dance videos on the TLDR account, in which case expect them to feature regularly in the Daily Briefing.

Anyway, the story we’re reporting on today is about a couple of TikTokers who decided it would be clever to film themselves getting an artistic photo of a car parked on a level crossing. In order to get the shot, they set up a tripod on the train tracks, pointing at the car.

The video they filmed of their setup included the line “Would you take the risk to get the shot no-one else would?”. Well, the Manchester Piccadilly Railway answered quite definitely ‘no’ to that. They uploaded the video to their Twitter account and questioned the stupidity of those involved. Something we’d very much like to echo.

It should go without saying, but trespassing on train tracks is absolutely illegal, and for good reason – it’s incredibly dangerous.

Advice from the Transport Secretary

In the last story in the Daily Briefing today, we talk about some advice that the Transport Secretary gave the public: don’t listen to him. Yep that’s right, that was his advice. Okay, well, as you know by now – Daily Briefing stories aren’t that short, so we’re going to need to elaborate a little.

Back in early 2020, Transport Secretary Grant Shapps was asked about booking holidays abroad. He told people he himself would probably not be booking a holiday abroad. Then summer came and he decided that, due to the introduction of ‘travel corridors’ (a way for people to travel abroad without having to isolate) that it was safe for him to go on holiday with his family to Spain.

Then, while on holiday, he had to take Spain off the travel corridor list, meaning that he had to isolate when he returned. He left Spain early so he could quarantine for less time, leaving his family in Spain.

So, when he was asked this morning about the increase in older people booking coach holidays for summer, hoping that the restrictions will be loosened by then, he outlined what happened summer and stated:

“So, don’t take any travel advice from me”.

We’ve got to give it to Mr. Shapps – at least he’s self aware!