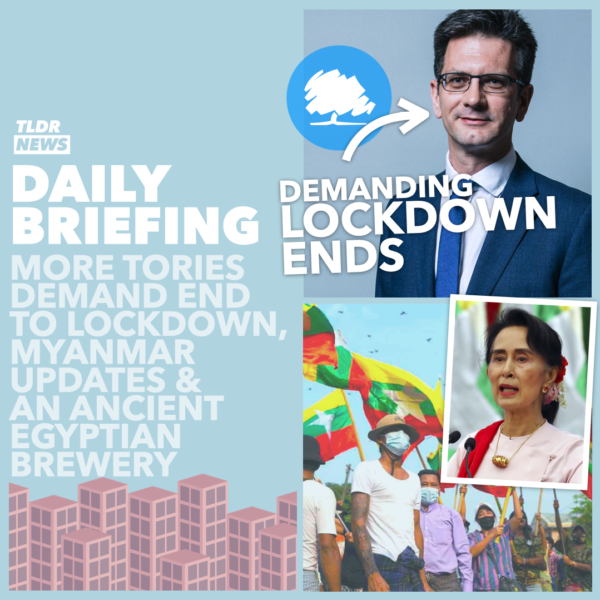 February 15th: The End to Lockdown?, Myanmar Updates, and an Ancient Beer Factory

The End to Lockdown?

In the first story today, we discuss the UK’s coronavirus situation. While the UK has undoubtedly had a tough battle with coronavirus, with only the US currently topping them in COVID cases per capita, there does appear to be some light at the end of the tunnel. This light comes in the form of the vaccine roll-out.

Over the weekend, the government has hit their hugely ambitious goal of vaccinating 15 million of the most vulnerable people in society – known as the top four priority groups. This is hugely vindicating for the government, who have been accused through the pandemic of over-promising and under-achieving. On this, though, it’s hard to argue that they’ve been anything other than successful.

Given that lockdowns have never been designed as a way out of lockdown, simply as a way to buy time for us to develop ways of reducing either the spread or the deadliness of the virus, questions are now being asked about exactly how and when measures will be relaxed. Obviously, a vaccine should stop the spread of the virus – and therefore reduce the deadliness of the disease.

In fact, in Parliament, there is a group that is not simply asking questions about when we will be able to return to normal, but demanding that it happen sooner rather than later. This is the COVID recovery group – a group that operates in a similar way to the European Research Group (ERG), and who criticise the Johnson government as much as the ERG criticised the May government.

The COVID recovery group are demanding that life is returned to normal by the 1st May – the deadline for all of the priority groups to be offered the first dose of the vaccine. Their logic is that with all of those at an increased risk of dying from the disease offered significant protection from it – we should simply open up society again, as the risk from COVID no longer justifies mass lockdowns.

Mr. Baker has been backed up by 62 other Tory MPs in his aim to unlock by May. This means that if they vote down the governments’ proposals (provided they propose a later unlocking, which seems likely) then they could actually defeat the government. This is if, of course, the opposition parties also vote the government’s proposals down.

The government, however, has been keen to hit back at these backbench Tory MPs – with Dominic Raab saying that the UK government would be “cautious” with unlocking. This didn’t seem to be enough for the COVID recovery group, though, with their leader Steve Baker insisting that a new Public Health Act is drawn up with the aim of preventing the government from introducing lockdowns without parliamentary approval (which they have been able to do through the Coronavirus Act of 2020).

For the second story today, we go to Myanmar to discuss updates about the coup. It was only about a week ago that the coup began in Myanmar, with the military taking control, following an election they claimed was based on fraud (which was denied by the electoral commission). Since then, the internet has been taken down for many citizens, the democratically elected leader has been imprisoned, and protests have been widespread.

In response, and in order to try and maintain control, the military has announced that protesters will face up to 20 years in prison if they “obstruct the armed forces”. This wording has been interpreted as meaning that protesters themselves – by virtue of protesting – could spend 20 years behind bars.

It has also been announced that on Wednesday this week, Aung San Suu Kyi will stand trial for possession of unlawful communication devices. The devices in question are walkie talkies – used by her protection staff.

In slightly more positive news, though, the internet was restored again today following its suspension after the military took control of the country.

It’s not yet clear whether the military will be able to maintain their grip on power, nor whether their authoritarian tactics will work in suppressing protesters. We’ll keep an eye on the story and update you if anything else happens.

If you want more global updates like this make sure to subscribe to the TLDR Global channel where every week we post a summary of the world’s biggest news stories.

In the third story of today, we move to Egypt to discuss a 5,000 year old beer factory – the oldest beer factory we know of.

The reason this has been brought up today is because it has just been unearthed by archeologists – we’re not so light on stories that we’re reporting on news from 5,000 years ago. The team that unearthed it found about 40 pots that are believed to have been used to heat grain and water – a simplistic way of brewing beer.

It is likely that this production facility was used around the time of King Narmer – one of the founders of the First Dynasty and someone who has been attributed with unifying Egypt.

In fact, the specific location of the brewery suggests that it may have actually been used to supply the royal family with alcohol at certain rituals. Considering how much beer the facility is estimated to have been able to produce (around 22,400 liters at a time) – these events were likely not short of beer!