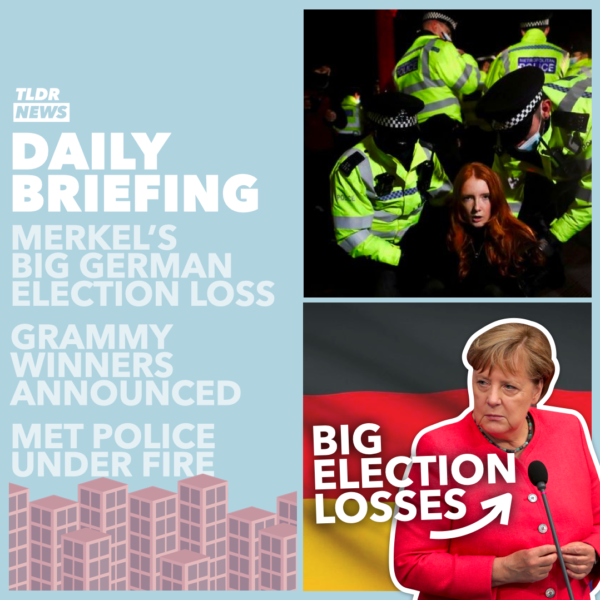 In the first story of the Daily Briefing today, we’re going to discuss the big news story over the weekend – the police’s response to the planned vigil. On Friday, we discussed the news that a group known as “Reclaim These Streets” had planned a vigil in honour of Ms. Everard. Due to coronavirus restrictions, and lack of police co-operation in the planning phase, the group had to cancel the vigil – and urged people not to turn up. Current coronavirus rules state that only two people from separate households can gather, and those that organise events that breach this can face fines of up to £10,000.

In light of this they, instead, encouraged people to light a candle on their doorsteps. However, as the event had already been planned – and as people were keen to gather, in order to mourn – people still turned up. Perhaps those that attended assumed that because the police had turned a blind eye to previous protests – such as Black Lives Matter and anti-lockdown demonstrations – they would act in a similar way.

After all, there doesn’t seem to be a huge difference between the events. It turns out though that those attending, assuming that the police wouldn’t intervene, were in for quite the shock. Some of those who attended were wrestled to the ground, and placed under arrest. This caused controversy throughout the UK over the weekend – with the rather controversial police response being heavily scrutinised. Cressida Dick, the chief of the MET police, has been under intense pressure to resign her position.

The Home Secretary (Priti Patel) has, however, defended Cressida Dick, making clear that she wasn’t calling for her resignation. Instead, the Home Secretary has instructed the police watchdog to conduct a “lessons learned review” into the actions of the MET.

Additionally, the Prime Minister is attending a task force meeting about how to protect women alongside Cressida Dick.

What do you think, though. Should Cressida Dick resign following the events of Saturday, or should she remain in her position? Let us know in the comments below.

In the second story today, we stay in the UK to discuss something going through the House of Commons today. This is the Police, Crimes, Sentencing and Courts Bill – which has been particularly controversial due to some clauses that relate to protest. The bill itself was drawn up in the wake of the Extinction Rebellion protests – which caused a large amount of disruption in London. The controversial part of the bill aims to make it easier for officers to shut down such protests – however civil liberties campaigners claim that the bill simply goes too far.

The bill will give police powers to impose start and finish times on protests, as well as allow them to set maximum noise limits. Although the bill will not stop protests happening on the grounds that they will be noisy – it will allow the police to convict people breaking the conditions of the protest more easily.

Criticising the bill, David Lammy (the Shadow Justice Secretary) called the bill a “mess”, and claimed that it would lead to a situation where damaging a statue had a higher sentence than attacking a woman.

As we mentioned above, the government would defend the bill by claiming that it would reduce the ability of groups like Extinction Rebellion to be able to block roads and stop people getting to work etc.

Due to the majority the Conservatives have in the House of Commons, it is unlikely to be defeated. Some Labour MPs are trying to get Conservatives who criticised the METs handling of the vigil on Saturday night to back the bill – whether they are successful is as yet unknown, and it is unlikely that even if they do, there’ll be enough to defeat the government.

We’re working on a full video on this topic for the TLDR UK channel, so be sure to click the link in the description to subscribe over there for that video when it’s released.

In the third story of the Daily Briefing today, we go to Germany to discuss the regional elections. With the coronavirus pandemic being the dominant issue in the news for the last year, it should come as no surprise that the German government’s handling of the pandemic was a key issue in the election. With a mask shortage, a slow vaccination rollout, and yet long lockdowns – the government had a tough job convincing voters that they should remain in charge.

Angela Merkel’s Christian Democratic Union (CDU) lost to the Greens in the Baden-Württemberg region and to the Social Democrats in the Rhineland-Palatinate region. This loss in these two important regions really signals to the CDU that the general election, set to happen later this year, may be a particularly difficult one to win.

They will already be going into it without Angela Merkel, who is particularly popular in Germany, and now (it seems) they will be doing so on the back foot.

This is, though, mere speculation – and we will have to keep an eye on developments in Germany in the coming weeks and months.

In the final story today and after some pretty bleak stories, let’s discuss something a bit more upbeat: the Grammy’s.

While the full ceremony might not have been possible because of COVID it was still a big day for music today – with one of the biggest music awards shows being hosted – albeit, virtually.

Anyway, there were also some other very historic wins including Beyonce (who now, with her 28th win, becomes the most-awarded woman in Grammy history), and Taylor Swift (who became the first woman to win album of the year three times).