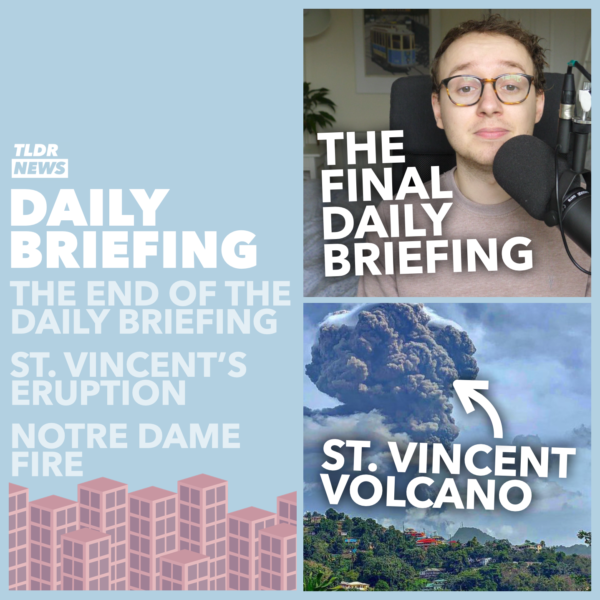 Apr 15: St. Vincent Volcano, an Ecosystem Report, the Anniversary of the Notre-Dame Fire

End of the Daily Briefing

Today is the 180th Daily Briefing, a project that Ben, Alex and I have been working on since July 2020. Pretty much every weekday since then we’ve run through the 3 or 4 biggest or most interesting stories of the day and given you a summary of the news.

We’ve really enjoyed this experiment and working on a project like this but ultimately we need to make some fairly severe changes and as such, today will be the final Daily Briefing… at least for now.

Unfortunately the Daily Briefing has never been able to reach the scale we hoped for and as such the project is currently losing a fairly significant amount of money. That was okay for a while, but it’s become increasingly clear that the project isn’t economically viable and unfortunately capitalism wins on this occasion.

This company in large part is funded by your generosity (with donations, patrons and merch sales making up a large percentage of our income) as such I feel a keen urge to steward that money effectively and spend it in ways that benefit the company and our audience most. Ultimately you spent money with us because you believed in what we were doing and wanted to help us grow – unfortunately the Daily Briefing isn’t able to do that.

There’s the possibility that we might revive the format at some point in the future and we will likely repurpose this channel going forward too, but there won’t be any more episodes for the foreseeable.

If you’re going to miss the Daily Briefing, then let me recommend the Global Summary over on the TLDR Global channel. That’s a weekly rundown of the biggest news from around the world and I think DB viewers would definitely enjoy that, it’s linked below.

We’re also working on a new series called TLDR Now (similar to the Daily Briefing( which will be posted across the TLDR UK, US, EU and Global channels, so make sure to subscribe across the network so you don’t miss any of that.

Anyway, before we continue with one final episode let me quickly thank the team. Thanks to Ben who has written almost every word of the Daily Briefing since its inception, working hard to hunt down the best stories and condense them into short nuggets. Thank you as well to Alex Reid, our animator for this series who’s pulled together every video and podcast from about November of last year, and don’t worry he’s not going anywhere and his hard work will be redeployed across our other channels. Thanks to you too for watching, contributing and for continuing to support TLDR into the future

That’s everything for the moment, but so let’s brief you one last time…

In the first story today, we move to St. Vincent to discuss the impact that a volcanic eruption has had on residents of St. Vincent. Last Friday, the La Soufrière volcano began erupting for the first time since 1979. This put into action the evacuation of around 20,000 people.

Currently, clouds of ash are still spewing from the volcano, and it is expected that this will continue over the coming weeks. This, in turn, will continue the crisis – with one UN official warning that the crisis will endure for many months to come.

The UN is in the process of establishing an international funding appeal. After all, all of those people that have been evacuated need to stay somewhere. Currently, about 4,000 of those that have been displaced are living in 87 shelters, many of which lack water and other necessities.

Worryingly, the Prime Minister (Ralph Gonsalves) has stated that despite the repeated warnings, many of the residents have opted to stay where they are and have not evacuated. Considering that the dangers are so high, and ash is still being spewed out – this likely comes as a worry to the humanitarian teams tasked with protecting residents.

We’ll have to see exactly how the UN attempts to resolve this crisis, and whether other countries are able to aid all those affected in St. Vincent.

In the second story of the Daily Briefing today, we discuss the environment. Specifically, we’re going to discuss the report that has been discussed in The Guardian newspaper, that suggests that only 3% of the world’s land “remains ecologically intact with healthy populations of all its original animals and undisturbed habitat”.

This 3% is located mainly in the Amazon and the Congo – in their tropical forests. The study found that a good way of restoring some areas would be to reintroduce some important species – such as elephants or wolves. They predicted that doing so would restore about 20% of the world’s land.

This is because species like elephants spread seeds and create clearing in forests. Additionally, wolves control the population of species like deer.

The report, that was published in the Frontiers in Forests and Global Change journal demonstrated that previously, it was believed that only 20-40% of the land on earth was left untouched by humans. The new research suggests that this is an overstatement – and that when we actually look on the ground (and not just from satellite imagery) we can see that more of the land in the savannah and tundra have been affected – and that vital species are missing.

Clearly, the report demonstrates, and provides more evidence for, the ecological emergency we are currently experiencing. Let’s hope that more funding and analysis is provided to better understand this phenomenon.

Anniversary of the Notre Dame Fire

In the last story today, and indeed the indefinite future, we go to France to discuss the anniversary of the Notre Dame fire. With so much happening in the last few years, both in politics and the world generally, it’s easy to forget the other disasters that have occured. For example, two years ago today (on the 15th April 2019), Notre Dame caught fire and much of the 850 year old cathedral was destroyed.

French President Macron has visited the site today on this anniversary and to assess the restoration work that has happened so far. The French president made the commitment that the cathedral would be restored in time for the 2024 Summer Olympics – which are set to be hosted in Paris.

It seems that this restoration work is going well so far, with the President remarking that he was “impressed” by “all the work that has been accomplished”.

We’ll have to keep an eye on whether this 2024 deadline is actually met.