Home Daily Briefing September 15th: A Blast from the Political Past, A Threat from Trump and the Poisoned Opposition Leader 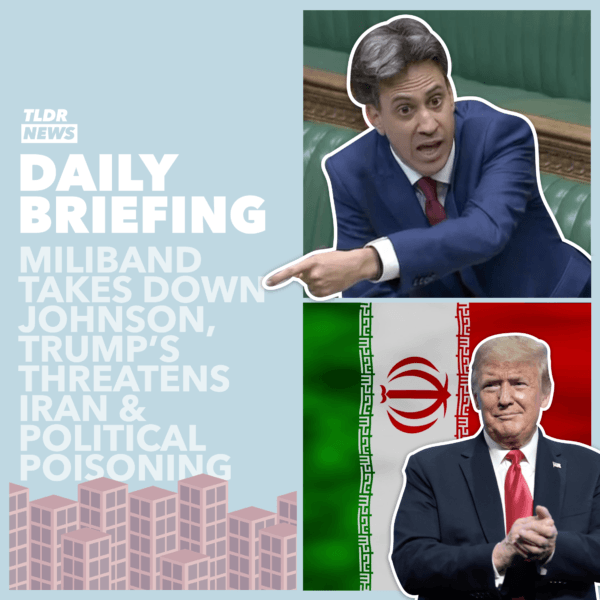 September 15th: A Blast from the Political Past, A Threat from Trump and the Poisoned Opposition Leader

A Blast from the Political Past

In our first news story today, we will go through the big night in the Commons last night. Following a controversial announcement to the chamber last week that the government was planning to break international law in a very specific and limited way, last night the bill that would do exactly that, was debated. As the Leader of the Opposition, Sir Keir Starmer, was isolating at home following someone in his household displaying symptoms of COVID-19, the former Leader of the Opposition, Ed Miliband, filled in for him at the dispatch box.

For those of us who have been following the jousts between leaders in the House of Commons, this was a strange moment. Having seen Ed Miliband spar with one of the Prime Minister’s predecessors, David Cameron, it was strange to see him back. To me, at least, it felt like two of the Doctor’s incarnations meeting (in the TV show Doctor Who). Or, to put it another way, it felt like Miliband was crossing into someone else’s era in politics.

Nonetheless, Miliband returned to the front benches with notable confidence. He started off by stating that the Prime Minister wanted to unite the country, and that he had done just that by uniting his five predecessors against him – with them claiming that he was ‘trashing the reputation of this country’ and ‘the reputation of his office’.

Mr. Miliband then went on to give the Prime Minister the opportunity to explain which part of the bill ‘deals with the threat of the blockade’ – even giving way to Mr. Johnson (allowing him to speak) before Johnson had asked. The deputy speaker intervened, telling Mr. Miliband that this isn’t allowed. The Prime Minister remained seated throughout Mr Miliband’s attempts to provoke a response.

However, while Mr. Miliband did appear to catch the attention of viewers at home, the Prime Minister remained notably calmer and seemed frustrated with some of Mr. Miliband’s questioning. He explained that the bill was designed to ‘protect the country’ by creating a ‘legal safety-net’. As the leader of the Conservative and Unionist Party, the Prime Minister was keen to stress that the bill being proposed ‘protects the integrity of the United Kingdom’.

These simple soundbites used by the Prime Minister may be an attempt to simplify the complex nature of the proposed bill. If you want the bill explained in a bit more detail, though, you’ll be happy to know that Jack spent last night writing a video just for you! It’s available on the TLDR News UK channel.

A Threat From President Trump

Okay, so moving onto the second story today, from the United States. The President has, yet again, caused quite a stir based on a comment he posted to Twitter. He has claimed that the US will retaliate with “1,000 times greater” force if Iran carries out an ‘assassination’ that it has been contemplating, as suggested by the site Politico.

Put simply, as the US killed the Iranian General Solemani, it was suggested that Iran was “planning a future attack” on US troops – according to President Trump. Others have suggested that, as the killing of the General took place very soon after the Presidents’ impeachment, there could have been other motivations.

Nonetheless, as a result, Politico have suggested that Iran is seeking revenge – and that this could, possibly, come in the form of an attempt on the life of the US ambassador to South Africa. Her security detail has been increased as a result.

It should be pointed out here that Politico have stated that Iran is “weighing” up this option – meaning that no one is yet sure if this is a legitimate plan.

In other global news, it has been reported that the poisoned Russian Opposition Leader, Alexei Navalny, has begun to recover in hospital. Mr. Navalny was poisoned with a chemical from the Novichok family while on a plane in Russia. As a result, he has been taken to Germany to recover.

While he was in a coma, he has now awoken and has slowly been making progress. Yesterday he was able to go the whole day without needing any mechanical assistance to breathe – a situation that he has shown he has a sense of humour about.

In an Instagram post, Mr Navalny said about his ability to breathe unaided: “I enjoyed it very much. It’s an amazing process that it is undervalued by many people. I recommend it.”

We will update you on any further updates about this story.