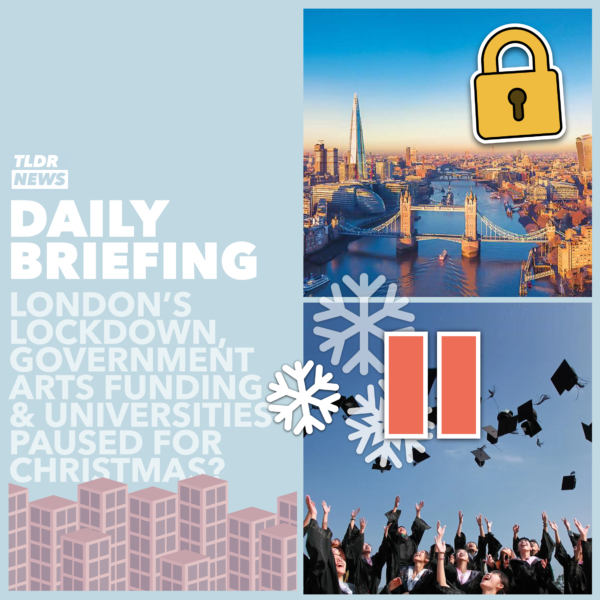 October 15th: London’s Lockdown, A Grant for Government Backing and A Pause on In-Person Teaching

It was only earlier this week that the Prime Minister introduced the new local lockdown mechanism for the UK – which explained exactly what restrictions would be implemented for the three different levels. If you need a refresher on these, then lucky for you, we released a video on said restrictions earlier this week.

As part of the new rules, all areas currently in local lockdown were moved to Tier 2. In addition to this, some other regions that were experiencing an increase in cases were also moved up to Tier 2 – notably, though, this did not include London.

Today though, this has changed. It has been announced that London will now have the tightened restrictions – starting Saturday. One of the largest changes to the social lives of citizens in London will be the restriction on household mixing, including in restaurants and bars.

The restrictions placed on citizens of London are notable for a few reasons. Firstly, it’s the capital. This move means that significantly more people in the UK will need to live with additional restrictions on their freedom. Secondly, it seems to diminish the argument that has been used over the last few weeks that the government is being unduly restrictive to northern cities. Thirdly, the government did not elect to put London onto the Tier 2 list a few days ago. It, therefore, seems as though the authorities have admitted that this was either a mistake, or that cases have risen significantly through the week. Another possible interpretation is that discussions between Sadiq Khan and the government have been finalised – which they may not have been at the time of the announcement.

It is not yet clear which of these interpretations is valid.

A Grant for Government Backing

In the second story today, it has been revealed that the government has insisted on backing in a campaign in order for certain groups to receive funds. As the arts sector has understandably been struggling during the coronavirus pandemic, they have been appealing to the government for some funds in order to tide them over until they can safely open their doors to patrons once more.

So, the arts sector must have been delighted when, earlier this month, the Culture Recovery Fund was announced. This was a package designed to bail out the struggling arts sector – as had been wished.

However, what wasn’t mentioned in the announcement was that, in order to receive the funds, the arts groups have to mention the government’s “Here for Culture” campaign on their social media. They were additionally told that they had to put the image of the “Here for Culture” logo on their website.

This has infuriated some, who see this as groups being forced to thank a government that has put them in this position and left them without funding for many months of the pandemic.

A Pause on In-Person Teaching

In the last story of the briefing today, the Department for Education is soon to set out its plans for students over the Christmas period. This is due to the increasing pressure on them to make clear exactly what students will need to do in order to be able to see their families for Christmas. The fear is that as students are mixing on campus, with in-person teaching, and mixing closely with other students in their houses – they may go home and spread the coronavirus to members of the family who may be vulnerable.

The Department for Education has already promised that students will be able to go home for Christmas – which has begged the question of how this can be done safely. It has been revealed that the government will soon lay out plans for in-person teaching to stop, and move online, a few weeks before the end of term. This would, theoretically, reduce the risk of student-to-student transmission prior to the move home.

One issue that has been raised, already, with this is that the cessation of in-person teaching would occur between the 8th and the 22nd of December. Oxford University breaks on the 7th. This highlights the issue the government has in coming up with a workable timeline. Additionally, other key holidays for certain religious groups fall within this potential mini-student lockdown – such as Hanukkah.

Exactly how the government will work around this is, as yet, unknown.