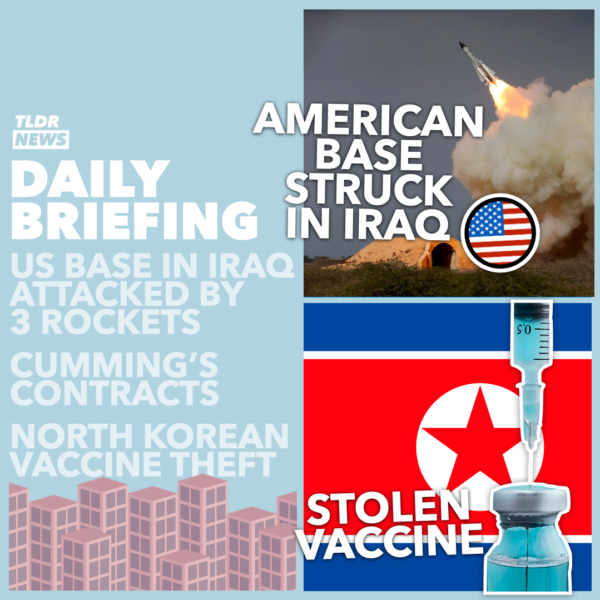 A US Rocket Attack

In the first story today, we move to Iraq to discuss an attack on a US airbase. According to reports, about 14 missiles were launched at the base on Monday night. Unfortunately, three of these hit the base – killing a foreign national who was working inside the base. A US national working on the base was injured too.

The attack has been claimed by a group calling themselves Awliyaa al-Dam (which translates as ‘Guardians of Blood’). The attack comes following a steep increase in tension between coalition forces and Iranian militias under the presidency of Donald Trump last year.

This attack provides a test to the newly inaugurated President Biden – as Trump previously promised that any attack on US citizens in Iraq would cause an US escalation. We are yet to see whether President Biden follows the same policy.

The US Secretary of State, Antony Blinken, said: “We are outraged by today’s rocket attack” and that he plans to “hold accountable those responsible”.

Awliyaa al-Dam have stated that they plan to carry out more attacks.

For the second story today, we go to the UK to discuss Dominic Cummings. For those of you who pay close attention to UK politics, you’ll likely know this man for his infamous trip to Barnard Castle early in the lockdown – which was perceived by much of the population as breaking lockdown rules. We should probably also note that he was a government advisor, and widely seen as Prime Minister Boris Johnson’s right hand man.

Late in 2020, following an internal power struggle, Mr. Cummings resigned from his role. Today, though, he has been drawn back into the political fray – with newspapers such as The Telegraph highlighting a £500,000 contract given to the PR consultancy firm Public First, the founders of which happen to be friends of Mr. Cummings.

As part of this contract, the firm tested the “Stay at home. Protect the NHS. Save Lives.” mantra.

As you’d expect, Mr. Cummings has insisted that the firm was not awarded the contract because the founders were his friends. He went on to state that the coronavirus emergency required the government to move quickly with contracts, and therefore, the fact that the contract was awarded without competition was “entirely justified”.

He added: “this was not the normal world, we were in a once-a-century pandemic and many thousands of pounds here was trivial if it helped us save lives and minimise economic destruction.”

The contract is currently undergoing a judicial review. The quotes from Mr. Cummings are taken from a witness statement.

In the third story of today, we move to North Korea to discuss the attempted theft of a vaccine. It’s fair to say that North Korea aren’t exactly renowned for their openness – so it should come as no surprise that they attempted to hack South Korea’s National Intelligence Service in order to steal Pfizer vaccine technology.

South Korea informed the media of this attempted hack, and made clear that they were able to foil it. This is the tenth time that North Korea have attempted to steal vaccine data, with them previously trying to hack the organisations creating the vaccines themselves (such as Johnson & Johnson and AstraZeneca).

Experts have suggested that the North Korean hackers are more likely to want to sell the vaccine data than use it to create their own vaccine. So, those hacking aren’t even necessarily doing it for the betterment of their country.

Nonetheless, North Korea is expected to receive a share of the vaccine anyway through the COVAX sharing program.