Home Daily Briefing September 16th: Williamson’s U-Turn, The Queen and Barbados and the Origins of COVID-19 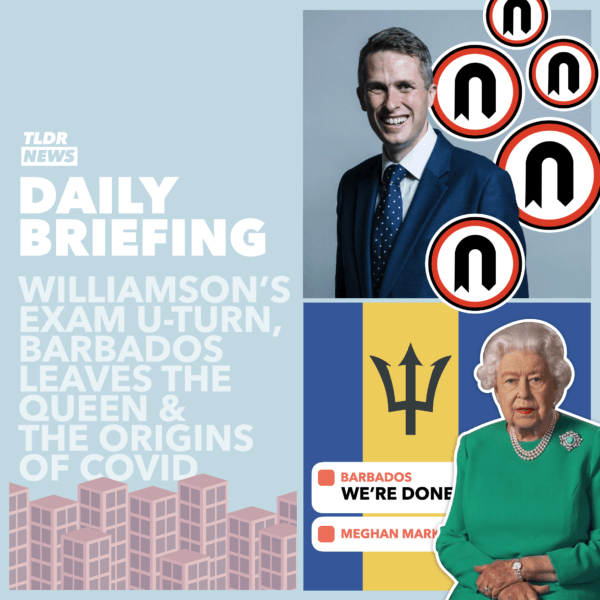 September 16th: Williamson’s U-Turn, The Queen and Barbados and the Origins of COVID-19

In our first news story today, we will go back to a story that dominated the news for weeks – the infamous Williamson u-turn. This was a government u-turn over how exam grades would be calculated for students who had been affected by the coronavirus pandemic.

Mr. Williamson has, today, defended his actions to MPs, claiming that had he not made the u-turn, the appeals system would have become overwhelmed. He also tried to defend the fact that he proposed the calculated grades system for GCSEs and A-Levels – but that in the end, the system just had too many ‘inconsistencies’.

The Queen and Barbados

In other international news today, Barbados has claimed that they aim to leave behind their colonial past by removing Queen Elizabeth II as their head of state by the end of 2021.

As a member of the Commonwealth, Barbados joins 53 other countries who are tied together in this group, who meet once every two years. It is not uncommon for members of the commonwealth to have the Queen as their head of state – take Canada for example. They have retained the British monarch as their head of state – which means she is featured on their money and postage stamps.

Barbados, however, has now started the ball rolling on the process of leaving. Buckingham palace has stated that this is a matter for them, and that the decision has not come from nowhere.

Exactly when Barbados will leave, however, is not yet known.

The Origins of COVID-19

The final story today is about the origins of coronavirus. While theories about the origins of COVID-19 have been rife ever since the pandemic began – experts are aiming to get to the bottom of it. Today, it has been announced that an international team of scientists will investigate this issue. It will be led by Dr Peter Daszak, a British zoologist.

While he admitted that the investigation would “systematically examine every theory”, and that he would approach it with an “open mind” – he has claimed that conspiracy theories that are not backed by evidence will be ruled out. This leads him to claim that conspiracy theorists would not welcome his appointment.

While this investigation will, hopefully, point us to the answer about how the pandemic started, Dr Daszac has claimed that it was not possible to “prove a negative” and that it likely will never be possible to say with “absolute certainty” that the virus began in one way or another.