Home Daily Briefing November 16: Hancock’s Tricky Interview, An Even More Effective Vaccine and No Contact in No. 10 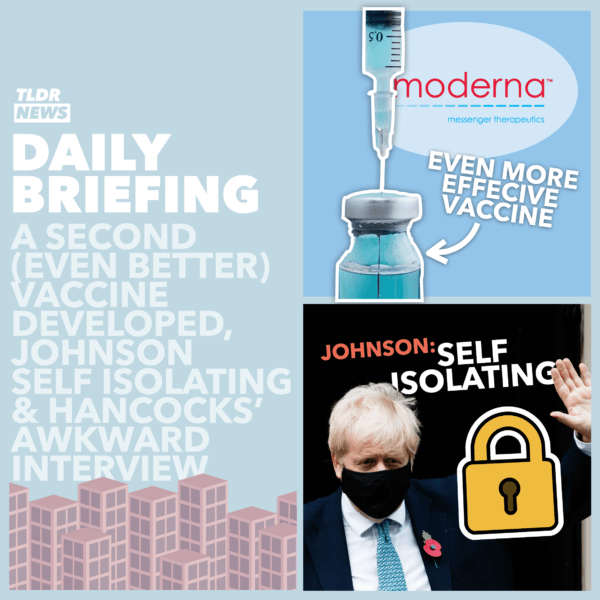 November 16: Hancock’s Tricky Interview, An Even More Effective Vaccine and No Contact in No. 10

Before we start a quick Daily Briefing update. We’re rapidly racing towards our 100th episode of the Daily Briefing and to celebrate we’re doing a livestream where I present the 100 craziest, funniest & weirdest news stories of 2020. To get that livestream ready though we will need your help collating the stories. So if you know any stories email them to us at dailybriefing@tldrnews.co.uk.

For every story of yours we use we will enter you into a draw to win one of 5 copies of our book Brexit the Colouring Book – so submit your stories now. Also if you want to watch along at 6pm on November 30th, you can head to the livestream event right now and click the button to be notified when we go live. Thanks for your support!

In the first story in the Daily Briefing today, we look at Matt Hancock’s first interview on Good Morning Britain in a few months, following what Piers Morgan called a “boycott” of the show. As with all of Piers’ interviews, he was fairly harsh with the Health Secretary – demanding an answer from him on when he will offer his resignation due to failings during the pandemic.

The conversation also went onto the topic of care homes, and the pilot scheme that has just been announced to allow family and friends into care homes following a rapid coronavirus test. However, both Piers and Suzanne pushed him on why this is only a trial, and why this hasn’t already been rolled out to all care homes yet. Mr. Hancock explained the logistical difficulties of doing so.

The fact this interview even took place is an interesting one. It was only on Friday that the Prime Minister’s right hand man Dominic Cummings resigned. Ever since Johnson came to power, it has been suggested that Mr. Cummings had control over the government’s communication strategy. In the 2019 General Election, the government gave few media interviews, and at one point the Prime Minister even hid in a fridge to avoid an interview with Good Morning Britain.

It is a possibility that today’s interview comes on the back of the resignation of Mr. Cummings, and that there is now no-one blocking such interviews. Exactly whether this return of regular media scrutiny of the government has made a permanent return is yet to be seen.

An Even More Effective Vaccine

In the second story today, we look at the global news of the progress of one of the coronavirus vaccines. Although last week the Pfizer team announced that their vaccine could be up to 90% effective, today Moderna has announced that theirs could be as high as 94.5% effective. Although both use the same messenger RNA technology, Moderna now appears to have the edge in the vaccine production race right now. Not only could it prove to be more effective, but also the requirements for storage are less demanding.

The difference between these two is significant. The Pfizer vaccine is significantly more likely to be wasted due to the shorter storage windows and lower temperature requirements – meaning that these incredible valuable vaccines could go to waste. It’s not only that though, in poorer countries, transporting vaccines and immunisation people while protecting a cold chain of -75°C would be prohibitively expensive at best and impossible at worst. The warmer temperatures the Moderna vaccine can cope in make using standard cooling technology possible, rather than the super cold coolers needed for the Pfizer vaccine; not only limiting waste, but bringing down costs especially for nations without existing super cold chain infrastructure already in place.

This increased ease in the logistics of transporting the vaccine may lead to a preference by governments to acquire more of the Moderna vaccine over the Pfizer vaccine – provided they are both available soon.

We should also point out that while it looks like we’re criticising the Pfizer vaccine in the wake of the news about the Moderna vaccine – this is not true. Both have done absolutely incredible work in creating and developing a vaccine at breakneck speed, which has exceeded the expectations of scientists – who were originally hoping, at best, for a vaccine that is around 80% effective. Both vaccines are a resounding win for science, and anyone who served on either team will hopefully go down in history as a hero.

So congratulations to both teams for the amazing work that you’ve done, and we hope that your creations will soon be put to good use at ending this pandemic.

In the final story today, we head back to the UK to discuss the situation in No. 10 Downing Street. While the end of last week was particularly explosive, with advisors resigning left right and centre, this week appears to have gotten off to a bad start too.

Following a meeting with an MP (reported to have lasted for 35mins), who later tested positive for coronavirus, the Prime Minister has been instructed to self-isolate by the track and trace system. Despite feeling as “fit as a butchers’ dog” and “bursting with antibodies” following his battle with the virus earlier in the year, he made clear that he will follow the rules – as everyone else should do.

We will soon know exactly how Johnson will lead the country while again being confined to a flat in Number 10.

Finally – last week we announced that we were selling a bundle of our new book Brexit: The Colouring Book Expanded Edition. You could get two copies of the book, both signed for only £15.99 nearly 50% off. Anyway, thank you to everyone who bought a copy, we will be shipping them as soon as the pre-order window ends. If you haven’t yet taken advantage of the deal – it will be live until midnight GMT tonight, so you only have a few hours left. You can find the bundle right here if you’re interested.