Home Daily Briefing December 16: An Iceberg’s Collision Course, A Case for Tier 2 and An Argument to Cancel Christmas 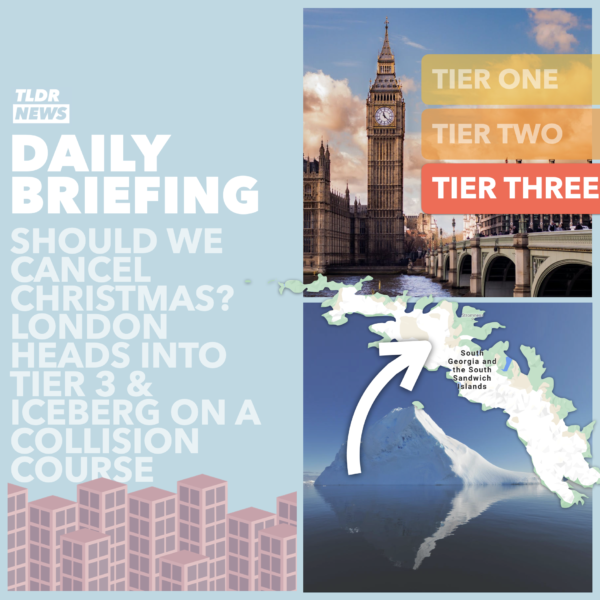 December 16: An Iceberg’s Collision Course, A Case for Tier 2 and An Argument to Cancel Christmas

In the first story of the briefing today, we discuss a big iceberg. More specifically, the largest iceberg we know of – which is known as A-68a. We’re not just bringing this iceberg up in the Daily Briefing today to say “wow, look how big it is!” – there is actually a story here. The reason it has made headlines this week is because it is on a collision course with South Georgia. This is a small island, and territory of the UK.

The concern is that if the iceberg, which is roughly the size of Jamaica (or three times the size of London) does collide with the island, then much of the wildlife will be affected. South Georgia is home to many penguins and seals. Depending where the iceberg hits, it could block the animals’ access to the sea – which is where they find their food.

In addition to this, much of the life on the seabed would be disrupted and likely killed. This problem would not be a short one either – it is predicted that the iceberg would take around 10 years to melt and break away.

Let’s just hope that the damage from the collision will be limited.

A Case for Tier 2

In the second story in the Daily Briefing today, we talk about something that we know a bit more about: politics. Today, the government is reviewing the tiers system. Two weeks ago, the UK was split up into different tiers, the lowest (Tier 1) was for where the virus was not very prevalent. Cornwall, the Isles of Scilly and Cornwall were the only areas that fell under this tier. Tier 2 was the next step up, and came with more restrictions. Many more areas in the UK were put in this tier. Again, many areas were also put under the highest restrictions (Tier 3).

However, this week (prior to the tiers review), London and some surrounding areas were moved from Tier 2 to Tier 3. This means that pubs and restaurants must close. This happened before the review due to a concerning rise in cases.

However, this was the only change to be made before the review. The rest of the changes are set to be announced today. Many local leaders are hoping to be moved down the tier list – in order to allow businesses, such as pubs and restaurants, to open in the run up to Christmas.

One such local leader is the Greater Manchester mayor Andy Burnham. He was all over the news a couple of months ago when he pushed for more funding for his area when they were first moved into Tier 3. Now he is urging the government to move them down. He claimed that the case numbers in his city were vastly below the average for England (150 per 100,000 compared to England’s average of 180 per 100,000). He also claimed that their cases are below the case numbers for London and Liverpool when they were moved into Tier 2.

We’ll have to see whether Burnham’s argument was accepted by the government.

An Argument to Cancel Christmas

In the final story of the briefing today, we discuss Christmas. It’s fair to say this year has been horrific. The thing we all want more than anything else right now is for things to go back to normal – to be able to hug our family, to be able to go on holiday, to be able to see friends, to go to concerts, to go to football. Basically, to do anything that we have been legally required not to for the better part of a year.

For many, this year’s Christmas has been the light at the end of the tunnel. The short period where we could indulge in some proper family time without having to worry about tiers, rules and lockdowns. So, when the Prime Minister announced following the November lockdown that people could form ‘Christmas bubbles’ in order to see family and friends over the festive period – many were thrilled.

After all, case numbers were stagnating, England had been locked down for a month and it seemed like a reasonable solution to many. However, since the announcement, case numbers have been rising rapidly. London has been moved up to Tier 3 and many scientists and scientific journals are now warning against a relaxation in the rules.

The government now appears to really be in a bind. Either they push forward with the Christmas plans knowing that case numbers, and tragically deaths, will rise. Or they cancel the plans – which would undermine confidence in them and any future promises related to coronavirus.

The administrations of the four nations of the United Kingdom met today to review the Christmas plans. It has been decided that the rules will remain largely unchanged. The UK government will issue more strict guidance as a result of the warning from scientists and the Welsh government have advised forming a bubble of only two households.

The government really are in a tricky position at the moment – we’ll leave it up to you to decide whether their decision to stick by the Christmas rules is the right one.