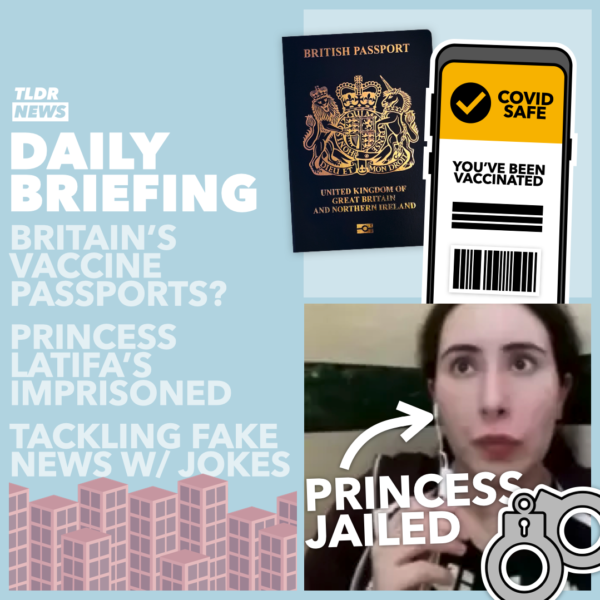 In the first story today, we move to the United Arab Emirates (UAE) to discuss aprincess’ imprisonment. Princess Latifa is the daughter of the Sheikh Mohammed bin Rashid Al Maktoum, the ruler of the UAE. Back in 2018, she attempted to flee her home country – claiming that her father mistreated her and her sister. She also accused him of murder.

However, her escape attempt was foiled. She had saved up £315,000 and hired a former French spy and naval officer (Hervé Jaubert) to help her flee. She managed to get to his yacht. However, a few days into the trip, Hervé noticed that they had been spotted by reconnaissance planes. Shortly after, their boat was boarded – and following smoke grenades being deployed, Princess Latifa was dragged off the boat kicking and screaming. She was then returned to Dubai.

In the last week, the princess sent a private video message to her friends, claiming that she was being held hostage. The video message has been released in media outlets around the world. The video is recorded from a bathroom, as she claims it is the only door she is able to lock. She additionally claims that the villa she is being held in has been converted into a jail, as the windows have been barred. Keeping her inside the house, she claims, are a total of seven members of the police – located both within the villa and just outside.

Her friends are calling on the United Nations (UN) to investigate. In fact, some world leaders have voiced their concern for the kidnapped princess – including Prime Minister Boris Johnson, who has further stated that he will “keep an eye” on the UN investigation.

We will also have to keep our eye on this, and see how the situation unfolds.

But, Taiwan have come up with a rather creative solution, a strategy called “humour over rumours”. Whenever a popular piece of misinformation arises on social media, a group working with the Taiwanese digital minister creates a joke (which contains facts) and posts it on social media themselves. The aim is to do this within two hours of the piece of misinformation getting big. The idea is that people like to share memes – so why not create something that is similar to a meme and can be used to stop misinformation? In fact, the government has even employed professional comedians as “engagement officers” – whose job it is to ensure that their jokes spread.

The digital minister aims to ensure that these jokes are put online within two hours of a misinformation post being spotted. Getting on top of these things early seems to be a priority. If they miss this target, then those spreading the lies are contacted and can be recruited by the digital ministry to help tackle the very misinformation they were previously spreading.

Clearly this is a radical approach – but they have already had some successes. For example, we all remember when early in the pandemic, rumours about toilet paper shortages did their rounds on social media. Well, this was the case in Taiwan too. The only real difference was that people believed that the increase in mask production would reduce the availability of toilet paper due to the belief that they were made from the same raw materials.

In order to counter this, the digital ministry created an image of the Taiwanese premier with his back turned, next to the caption “we only have one pair of buttocks”. Included in the image was a table showing that toilet paper uses completely different raw materials, and therefore, there would not be a shortage.

It was later revealed that toilet paper manufacturers started the rumour themselves in order to sell more.

We’ll leave it up to you to decide whether this is a reasonable way for governments to deal with misinformation online.

In the third story of today, we move to the UK to discuss proposed vaccine passports. While the government has quite blatantly ruled out the use of such passports domestically, it may be up to private businesses whether they want to introduce these to ensure that their workers are vaccinated.

Some companies could see this as essential in order to offer a safe service – such as care homes. The issue is that ‘no jab, no job’ work contracts could come under some serious legal pressure. Being able to distinguish why someone has rejected a vaccine would be the key to whether such an attitude is legal. Some people reject vaccines on religious, health or disability grounds – and getting this wrong could see companies in court for breaching discrimination rules.

Making sure that companies aren’t discriminating, therefore, would require them (at the very least) to have detailed access to applicants’ medical records – which, again, comes with it’s own problems.

If a company does opt to use the “no jab, no job” approach in it’s contracts, then it is possible this could end up in court. Exactly what the court would decide is, as yet, unknown.