Home Daily Briefing Mar 17: A US Shooting, EU Leaders Turning on One Another, Vaccine Updates, and Some News from Japan 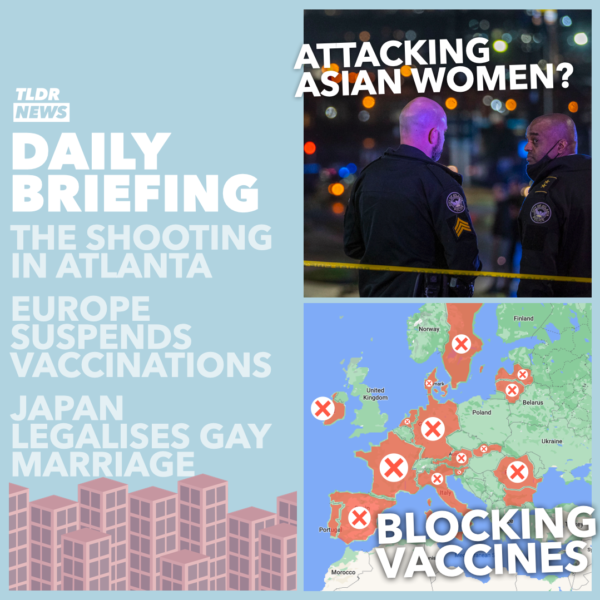 Mar 17: A US Shooting, EU Leaders Turning on One Another, Vaccine Updates, and Some News from Japan

Late last night, a gunman in Atlanta killed at least 8 people in a series of shootings across three separate massage parlours. The victims have been described by authorities as mainly women of Asian descent. A 21-year old man has been apprehended by the police, and taken into custody. Georgia’s governor has praised authorities for the way they apprehended the suspect.

So far, a motive has not been found. New York City has, though, deployed extra “assets” to Asian communities “out of an abundance of caution”.

Instead of speculating about the possible reasons behind the attack, we think it’s best for us all to reflect on the event, and on the pain the family and friends of the victims must be feeling at this time. Our thoughts are with all of those that knew the victims, and we hope that the perpetrator is swiftly brought to justice.

In the second story today, we move to Europe to discuss the situation related to vaccinations. You may have seen some news about the potential for the AstraZeneca vaccine to cause blood clots. Now, we’re not scientists – but some of the big regulatory bodies have refuted this claim, with the European Medicines Agency (EMA) saying there was “no suggestion” that it caused fatal blood clots. In fact as many people have pointed out online, there’s simply not enough evidence to draw a line between these handful of blood clots and the vaccine. A huge number of people have blood clots each year, especially in the older demographics that have been vaccinated thus far, so to presume a correlation is pretty questionable – especially when others regularly consumed drugs like birth control. So the issue here, really, is correlation and causation.

On Thursday, the EMA is set to release it’s full findings about blood clots and the AstraZeneca vaccine. Matt Hancock urged the EU to follow the lead of Britain’s “world class regulator”.

Despite this comment, many European countries have currently suspended the use of the AstraZeneca vaccine. The German government, having just suspended its use, appears split on the issue. That’s because CSU and Bavarian leader Markus Söder claimed that he would take the vaccine as soon as possible – suggesting that he may not actually support the government’s suspension.

In fact, even the European Commission president Ursula Von Der Layen has said that she would accept the vaccine if offered – again hinting at tension among European leaders.

Exactly how Europe will go about rebuilding trust in the vaccine, if it is found to be safe on Thursday, is as yet unknown.

In the third story of the Daily Briefing today, we move back to the UK to discuss the progress being made here with the vaccine. As we just explained, European nations seem to be increasingly hesitant to use the AstraZeneca vaccine – due to some reports of blood clots. The UK, on the other hand, has demonstrated its determination to go full steam ahead with its vaccination policy.

It had previously been announced that the UK was aiming to offer vaccines to all over-50s by April 15th. All over 50s have today been urged to book a coronavirus vaccine on the NHS website. This means that the government has met this target 29 days early.

It has additionally been suggested that all over-40s will be invited to book their jab next week. So far, around 25 million people have been given their first jab of the vaccine – which is closing in on half the UK adult population (there are around 53 million adults in the UK).

This good vaccine news seems to be helping the Conservatives in the polls too, with them increasing their lead over labour in recent days. It’s not all rosey for the Tories though with them coming under fire for the passage of the police, crime, sentencing and courts bill in the Commons yesterday. This very controversial bill is (according to the government) all about increasing law and order and protecting women but critics say that the government is really trying to end the right to protest in the UK, passing draconian laws which make protests almost impossible – you can find out more about this truly monumental bill in our video on TLDR UK today.

It’s one of the most important UK videos we’ve made in a while and it’s linked below.

Some News from Japan

Our final story today is some good news coming from from Japan, whose district court has ruled that not allowing same-sex couples to marry is unconstitutional. This is a big step in the right direction for equality in the only G7 country that does not fully recognise same-sex partnership.

As it stands, same-sex couples in Japan can’t inheret their partner’s assets (such as a shared house), nor do they have any parental rights over children they both have. This demonstrates the clear legal differences between heterosexual and homosexual relationships.

Clearly this is a landmark victory for equality, and for the LGBT+ community around the world!