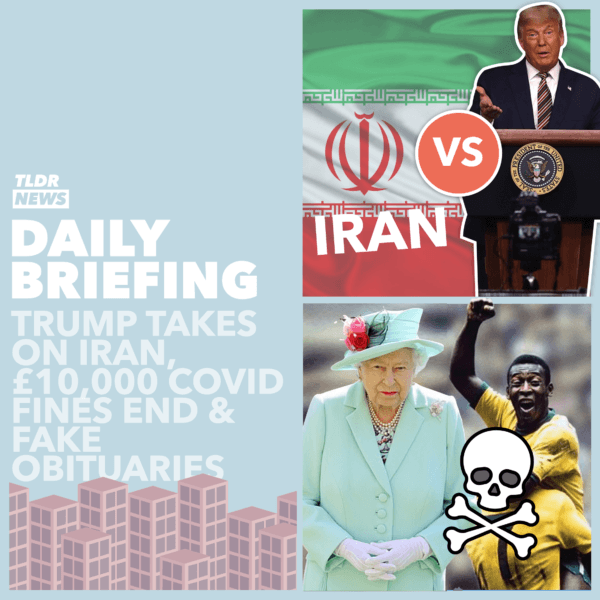 November 17: Trump vs Iran, No More 10k Fines and the Publication of Fake Obituaries

In the first story in the Daily Briefing today, we look at what President Trump has been up to since the presidential election. While the media has focussed on the news about Trump’s refusal to concede the election, and his unfounded claims of electoral fraud, it is not true that this is all that he’s been up to. In addition to this, he has been discussing with his generals the possibility of launching a strike against Iran before he leaves the White House in January.

It has been revealed that the President has been looking into the options available to him for striking Iran’s nuclear sites. While this reportedly was his aim, his advisors dissuaded him on the basis that such an action would likely lead to a larger conflict in the Middle East.

Trump has had a difficult relationship with Iran for his entire presidency, with friction only increasing when he pulled the US out of the Iran Nuclear Deal, imposing huge sanctions on the country. Iran, and other nations in favour of the deal, seem to hope that normality may resume when Biden gets behind the resolute desk.  To be fair however, Trump did campaign on pulling the US out of the deal.

But with Trump in the White House for at least a couple months more, we could be in for an even more eventful end to the Trump presidency than we anticipated.

In the second story today, we move back to the UK to discuss the ever-complained about lockdown rules and punishments. While many of us are following the rules and understand the necessity for them to be enforced, some do not. Some have flouted the rules excessively over the last few months – hosting house parties and large gatherings. The government and police have, therefore, felt it necessary to implement punishments to dissuade people from flouting the rules.

The most extreme example of this in the UK was the £10,000 fine that can be given to an event organiser for breaking lockdown rules.

Today, though, the National Police Chiefs Council have announced that they will no longer be issuing such fines, due to the fact that people can appeal them and often pay a lot less following  an agreement in court.

The alternative approach that has been proposed is to take each mass lockdown-breaker to court to have their ability to pay means-tested. This approach will take a little while to implement, so for now, the police are simply suspending fines and taking people straight to court instead.

To be clear, this isn’t the police suddenly going soft and allowing people to get away with lockdown breaches. It is them trying to ensure that fines are paid and that the size of the fine is fair.

In the final story today, we go to France to look at the radio station (Radio French Internationale) that has, mistakenly, published a bunch of obituaries of people who are very much still alive. The list of obituaries published includes Queen Elizabeth II, former US President Jimmy Carter, former footballer Pele and actor and director Clint Eastwood.

While it is common for news outlets to write obituaries long before a person dies, so that they can be as quick as possible to publish upon the unfortunate event of their death, it is particularly uncommon for these to be published while they are still alive.

Upon realising their mistake, the radio station apologised and confirmed that around 100 obituaries had prematurely been published. We hope that all of those that featured in the publications are well and that we don’t see the articles online again any time soon…