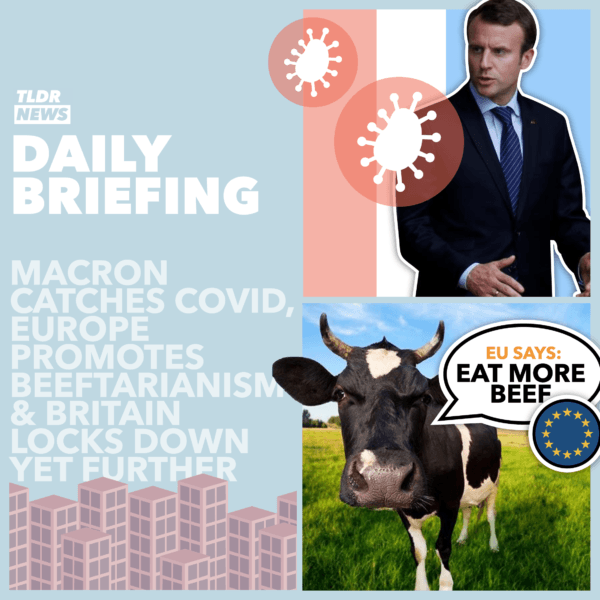 In the first story of the briefing today, we go to France to discuss the President’s recent diagnosis of COVID-19. Ever since the pandemic began, we have heard of multiple world leaders battle with the virus. Our very own Prime Minister, Boris Johnson, had a particularly difficult bout of the virus when he contracted it in late March. It was so bad that he had to go to intensive care and plans were drawn up to deal with the possibility that he died from the disease. These have not yet been made public.

The Brazilian president Jair Bolsorano caught the virus in July. He has since recovered – and didn’t appear to have it nearly as bad as Johnson. The US President also caught the virus, only a few weeks ago. Again, he was not hospitalised like Johnson and swiftly recovered.

All of these cases undoubtedly caused fear and stress in their respective countries. Whatever you think of someone’s politics, a leader dying in office causes serious problems for continuity of government and response to the pandemic.

Today, another leader has been added to the list of leaders who have caught the virus. The French President has today caught the virus. And, unlike Trump, this was revealed because Macron began displaying symptoms. He will now begin his 7 day isolation period – through which he will continue to chair meetings and run the country.

We wish Mr Macron all the best in his recovery.

In the second story in the Daily Briefing today, we talk about a bit of an odd story from the EU. It has today been announced that 34 MEPs have accused the EU commission of hypocrisy. This relates specifically to their stance on environmentalism.

It has been shown that the EU commission has given away €3.6m to the meat industry to promote beef consumption. Around €2.4m of this fund will go to a Spanish group which is starting a “Become a Beefatarian” campaign. €1.2m will go to a Belgian group.

The MEPs who have complained about this funding have done so by arguing that it undermines the EUs Green New Deal – part of which aims to reduce meat consumption. This would help the environment and also improve people’s health.

The MEPs state in a letter (seen by POLITICO) that:

“It seems to us … that the Commission is setting ambitious sustainability goals, but then is fearful of letting down the meat (and dairy) industry when it comes to real action, meaning that harmful subsidies or support measures … continue”.

Let us know what you think of such subsidies in the comments below.

In the final story of the briefing today, we discuss the tier review in England. With Christmas just around the corner, the government has rightly been concerned about the rise in case numbers. It was only last night that the Prime Minister chaired a Downing Street Briefing urging people to be sensible at Christmas.

Today was the first review since the tiers were reintroduced in December following the November lockdown.

Bedfordshire, Buckinghamshire, Berkshire, Peterborough, the whole of Hertfordshire, Surrey (except Waverley), Hastings and Rother, Portsmouth, Gosport and Havant will move into Tier 3.

This appears to be a move by government to try and ensure the virus is kept as low as possible over the Christmas period, as it is looking likely that there will be upward pressure on transmission from the Christmas bubbles.

Let’s hope that virus transmission remains low, and that more areas will move down the tier list in the new year.