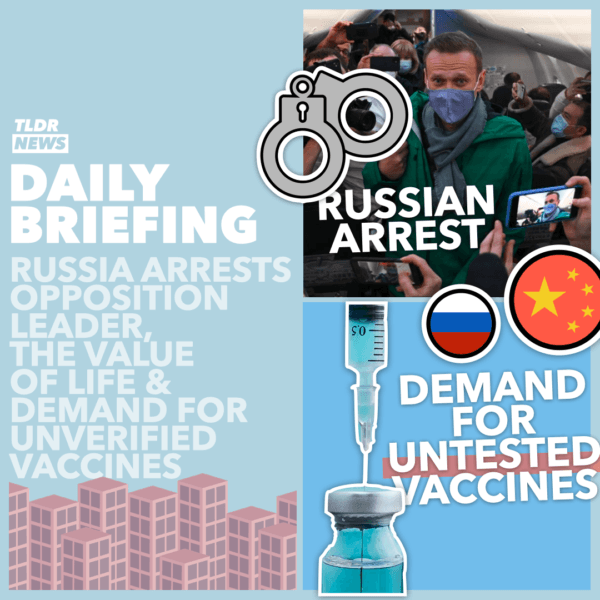 In the first story of the briefing today, we discuss the news that the Russian Opposition Leader, Alexei Navalny, was arrested upon his return to Russia on Sunday. In order to understand this story, we need to go back to the 20th August 2020.

Navalny was on a flight from Tomsk to Moscow. When on the flight he passed out, and was taken to a hospital in Berlin. It was later revealed that Mr. Navalny was suffering from Novichok poisoning – this was the same type of chemical used in the infamous Sailsbury poisoning. Mr. Navalny believes that Russian President, Vladimir Putin, called for the poisoning. Western nations also seem to think that the Kremlin had some level of involvement as shown by the fact that both the EU and UK implemented sanctions for six senior Russian officials.

Mr. Navalny has spent the last few months recovering from the poisoning in Germany. It was only this weekend that he made the decision to go back to Russia. Upon landing in Russia, Mr. Navalny was immediately arrested. He gave his wife a peck on the cheek and was then taken away. It is so far unclear on what grounds he was arrested.

Governments from around the world have condemned the arrest as being politically motivated – including both the outgoing and incoming US administrations.

A Lord’s Evaluation of Lives

For the second story today, we move to the UK to discuss former Justice Lord Sumption’s comments made on the BBC show “The Big Questions on Sunday”. One of the discussions in the show was about the cost of the coronavirus lockdowns. Former Justice Sumption has been quite vocal about lockdowns over the last few months – specifically being critical of the way that the police are enforcing them early in the pandemic.

More recently, he has become a leading anti-lockdown protestor – claiming that the cost is now outweighing the benefits. This was, largely, his point on the BBC show.

However, he said something that offended many people on social media. This was his rejection of the notion that “all lives are of equal value”. He claimed that children and grand-children’s lives were worth more as they had more of it ahead.

Another of the panel interjected, and claimed that due to her stage 4 bowel cancer – she was one of the people whose life was “not valuable”, according to him. Lord Sumption then replied, stating “I didn’t say your life was not valuable, I said it was less valuable”.

Lord Sumption later responded to the controversy with the following:

“I object extremely strongly to any suggestion that I was inferring that Miss James’s life was less valuable because she had cancer. I thought she was responding to my earlier comments about older people being protected by a total lockdown which is causing immense harm to the young who are unaffected. That harm can be to their mental health or through cooping undergraduates up at university or through the loss of jobs. I was saying this should not be inflicted on the young to protect old people like me. If Miss James has misinterpreted that then I can only apologise to her as it was not my intention to suggest she was less valuable. Sometimes on videolinks it can be difficult to hear what the other person is saying.”

In the last story in the Daily Briefing today, we discuss the latest vaccine news. Here in the UK, vaccines are being provided for free to the population – starting with the most vulnerable and then moving down the vulnerable groups list. Effectively, this started with the over 80s and healthcare workers. Now, we have moved down the list again and the vaccine is being offered to the over 70s as well. This is because over 50% of the over 80s have received the first dose of the vaccine.

This is incredibly positive news – as it indicates that huge numbers of the most vulnerable in society have received some level of protection from this horrible virus. The government still has work to do to be successful in their 2 million vaccines a week goal with the latest NHS England reporting showing weekly vaccinations sitting around 1.2 million – but this is a good start!

In other vaccine news, it has been reported that there is growing demand for the Chinese and Russian vaccines. Neither has gone through the rigorous clinical trials phase that other vaccines have – or at least, if they have, the data has not yet been published. Despite this, and possibly due to the limited number of vaccines globally, many countries have put in orders with both Beijing and Moscow for their vaccines.

It has been suggested that exporting the vaccine could help bolster China and Russia’s reputation abroad. It will, though, depend on how many vaccines they are able to sell and how effective they are.