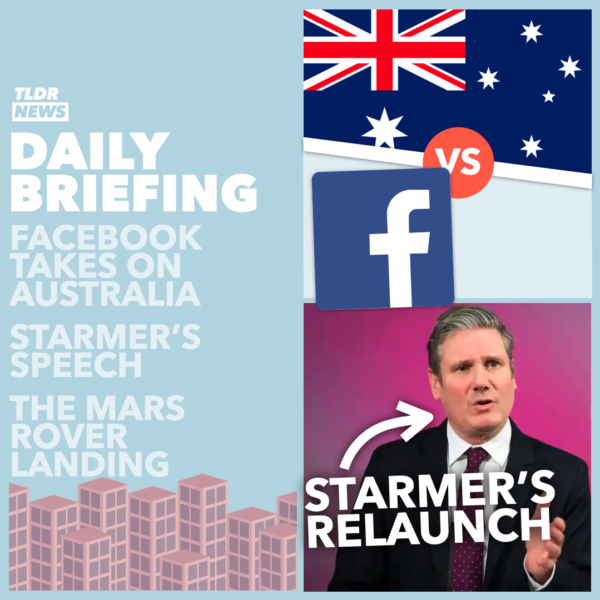 February 18: Facebook’s Aussie Drama, a Speech from Starmer, and a Mars Rover

In the first story today, we go to Australia to discuss the overnight removal of news from Facebook. This comes following a war of words between the Australian government and Facebook about a proposed new law that would make social media companies pay news outlets for their content. If a link to a news site is included on Facebook, then they would have to pay for it to be there. Put simply, the Australian government is trying to level the playing field between social media giants (who are raking in more and more advertising revenue) and traditional media outlets, who are seeing their advertising revenue share decline.

In response to this proposed rule-change, Facebook has decided simply to block news from appearing on both Facebook news feeds and Instagram. However, they have been criticised for being slightly heavy-handed in their approach. This is because not only have they removed links to news outlets, but also government health and emergency pages – which have been used to help people through the pandemic.

The Australian Prime Minister Scott Morrison was not happy about Facebook’s decision – especially after Google appeared to accept the new rules. He stated that “Facebook’s actions to unfriend Australia today, cutting off essential information services on health and emergency services, were as arrogant as they were disappointing”. He added that Google had “recently demonstrated good faith”.

The Premier of West Australia, Mark McGowan, even went as far as accusing the company of “behaving like a North Korean dictator”. Strong criticism indeed.

A Speech from Starmer

For the second story today, we move back to the UK to discuss this morning’s speech from Keir Starmer. The speech was aimed at setting out some clear policies from Labour – perhaps an attempt to create a clearer party image following accusations (on both the left and the right) that the leader of the opposition didn’t have a clear enough brand of politics of his own.

One of the main policy announcements made in the speech was that of a ‘British Recovery Bond’. This would be an offer from the UK government for people to open a savings account with “competitive interest rates”. The money raised through the scheme would then be used to finance the country following the coronavirus pandemic.

This idea has already prompted commentators to draw historical comparisons. Following the Second World War, Prime Minister Clement Attlee (a Labour Prime Minister) introduced welfare policies, including sickness and unemployment benefits for adults. This was paid for by national insurance contributions. This particular government has gone down in Labour history as one of the most successful at implementing what they stand for.

In the third story of today, we move to Mars to discuss the latest rover landing. Tonight, the Perseverance rover is set to touch down on the surface of Mars, with the purpose of attempting to discover whether there was past life on the planet. It is attempting to land on the Jezero Crater which, it is believed, could have once been a huge lake. With water, the chances of life previously existing on the planet increase hugely.

However, in order for the rover to dig through the Martian dirt to discover what once may have existed, it first needs to actually land – and this is no small feat. It has been claimed that almost 50% of the previous attempts to touchdown on Mars have failed, according to Nasa’s deputy project manager for Perseverance.

If you want to watch the rover touch down, the “seven minutes of terror” (which is the phrase used to describe it’s decent) is set to happen at between 8:30 and 9pm GMT. NASA will be livestreaming the event on their website, if you want to watch.