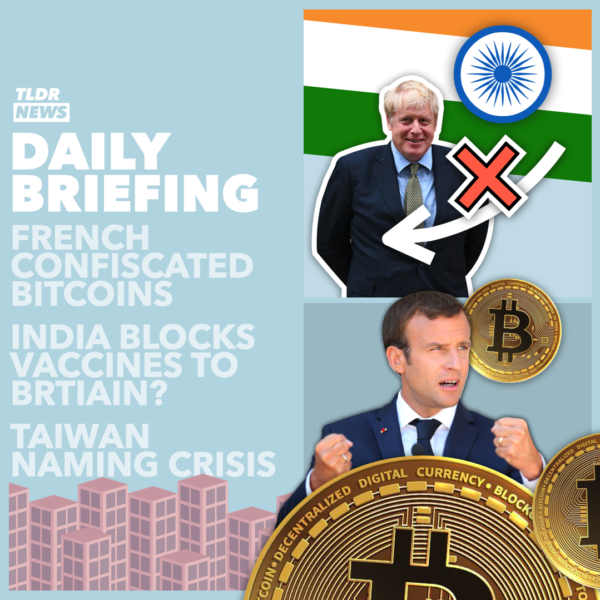 In the first story of the Daily Briefing today, we discuss the upcoming UK vaccine shortage. Okay, maybe shortage isn’t the right word – but effectively, the vaccine supply to the UK is set to slow down in the coming months.

There was a bit of confusion yesterday, with some outlets (including us) speculating that it could be as early as next week that over-40s are able to book their first coronavirus jab in the UK. As a statement from the government later in the day yesterday made clear, though, this will not be the case – as there is set to be a slowdown in the delivery of doses over the next month.

Adar Poonawalla, the CEO of the Serum Institute of India (who produce the AstraZeneca vaccine) spoke to The Telegraph and made clear that the Indian government is temporarily holding exports of the vaccine. This includes 5 million doses destined for the UK. As you’d expect, Mr Poonawalla was keen to emphasise that it was the Indian government, not his company, that was restricting the vaccines leaving India:

“It is solely dependent on India and it has nothing to do with the SII (the Serum Institute of India). It is to do with the Indian Government allowing more doses to the UK”

The Indian government is likely less willing to allow vaccines to be sent abroad following the rise in cases in the last few days and weeks. Despite their decision to hold off on allowing the vaccines to be exported, Health and Social Care Secretary Matt Hancock has made clear that the UK will still meet the vaccination target. It has also been made clear that anyone who is booked in to have a vaccine in the UK will still receive their vaccine.

In the second story today, we stay in the UK to discuss some plans related to asylum seekers. Before we get into this story, we should probably point out that we’ve made a few videos explaining the system the UK uses to assess and house asylum seekers. You can check them out here, here and here.

While these videos explain the system as it is, some aren’t too happy with it. The Home Secretary, Priti Patel, has claimed that it is “fundamentally broken” – which likely explains her motivation to change it so radically.

The Labour Party has branded this proposal “absurd” and the British Red Cross has stated that it would “do nothing to address the reasons people take dangerous journeys in the first place”.

What do you think, though? Is this a good plan, and one that addresses fundamental issues with the UK asylum system – or is it an ill-conceived, inhumane way of dealing with those seeking asylum?

In the third story of the Daily Briefing today, we move to Taiwan to discuss the naming crisis. Now, we all know what it’s like to see a pretty decent promotion and jump at it. Hell, we all lived through the government’s ‘Eat Out to Help Out’ deal. Some of us will go further than others with these – perhaps you have to share some advertisement with a friend on Facebook for a discount on a pizza, perhaps you have to collect 10 stamps for a free burger, or perhaps you have to change your name for some sushi.

Okay, well, maybe no-one watching this knows what it’s like to change your name for some free sushi – but many people in Taiwan do. This is because a chain of Sushi restaurants promised that anyone with the words ‘gui yu’ in their name (which translates to ‘salmon’) would be entitled to an all-you-can-eat sushi meal for themselves and five friends.

This prompted a wave of people to change their name in order to satisfy the conditions of the promotion. This has been dubbed ‘salmon chaos’ by local media – and has even prompted a statement from the government.

The deputy interior minister said on Thursday that: “this kind of name change not only wastes time but causes unnecessary paperwork”.

Despite this plea from the government, some appear quite impressed with their frugal dining. One college student boasted that he ate more than £176 worth of sushi on the back of the promotion.

Don’t worry, though, we won’t be implementing this kind of promotion on the TLDR Store for pin badges.

In our final story today, we’ll discuss the French government’s plan to sell confiscated bitcoin. Let’s just paint a scenario for you: you’re the French government and you’ve managed to take a group of hackers into custody. As part of the arrest, you’ve seized 611 bitcoins. What do you do?

Governments don’t use bitcoin to finance any of the services they supply, and it would be a waste to just let them sit around, collecting virtual dust. You, therefore, would likely do the same as the French government: sell them.

Given that the price of bitcoin is currently around $60,000 (although they may sell for less), it’s reasonable to expect that the French government will end up with a cool $30m added to their public finances. Not bad at all – especially considering that bitcoin was only valued at about $10,000 when they were seized.