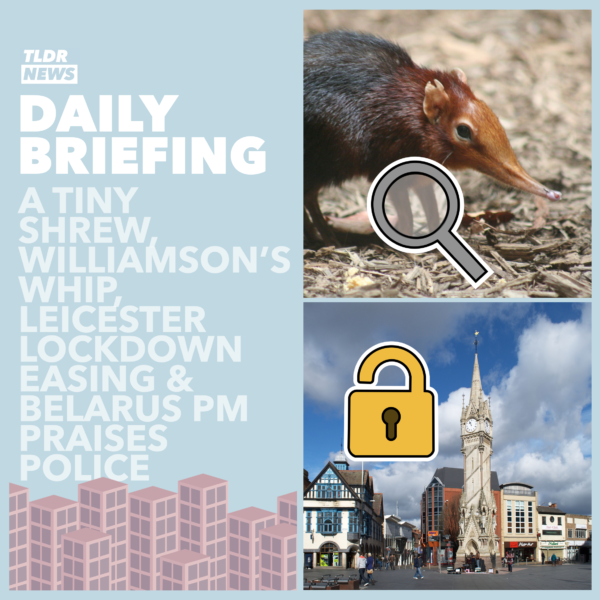 We thought we’d begin today’s Daily Briefing with some positive news about nature – a type of news we’re pretty sure has not yet been discussed in the Daily Briefing. This is the discovery that a small shrew, roughly similar in size to that of a mouse, has been rediscovered in Africa. This is after a 50 year hiatus where scientists had no direct observations of it – fearing it may have been ‘lost to science’ forever.

The shrew, unlike a number of other animals, mates for life, and can travel at a speed of up to 30km/h (or around 19 mp/h for those that prefer imperial measurements). It also uses its nose to suck up ants.

This has been a big discovery for science and also a welcome happy news story to start the briefing off with.

In UK news today, it appears that Education Secretary Gavin Williamson is determined not to be sacked following the government u-turn over A-Level results. Last night, he posed for a picture with the Press Association – which included an actual whip with a small book on it. It has been speculated by MPs that this is a clear sign to Prime Minister Johnson that he “knows where the bodies are buried” following his time as chief whip.

The Telegraph claims that MPs are speculating that Mr Williamson is lining people up to blame for the u-turn over A-level grades. Ofqual chief executive Sally Collier and the Department for Education’s permanent secretary Jonathan Slater are being touted as the most likely to be blamed in order to save Mr Williamson.

Although it is yet to be seen whether Mr Williamson will remain the Secretary of State for Education – one MP has stated that “Gavin has an instinct for self-preservation”. They have, though, refused to go on the record with The Telegraph when making this claim.

We will see in the coming days whether he really does have this instinct.

In other UK news today, some of the restrictions placed on Leicester have been given a relaxation date. Notable activities that will be resumed on Wednesday are: visits to nail bars, swimming in outdoor pools and visits to beauty salons.

It should be noted, however, that residents are still banned from meeting friends or family either indoors or in their back-gardens. This ban even includes going outside Leicester to meet people. The only exception, really, is support bubbles – which are allowed to meet.

This slight lockdown easing will likely come as welcome news from residents of Leicester.

The Belarusian President’s Praise of the Police

In European news today, Belarusian President Lukashenko has praised the police who have maintained loyalty to him during the county’s difficult few weeks.

This follows widespread protests in Belarus of President Lukashenko’s authoritarian tendencies and alleged vote-rigging. Lukashenko purportedly won 80% of the vote in the recent presidential election – although many dispute this.

Many have reported that they were beaten and tortured by police after protesting this election. Lukashenko has left no-one in doubt today that he is continuing to come down hard on the protestors by giving 300 members of the police and KGB awards.

Lukashenko is demonstrably not softening his approach – and his position as president is becoming increasingly difficult to maintain. We will keep you updated with this story as it progresses.