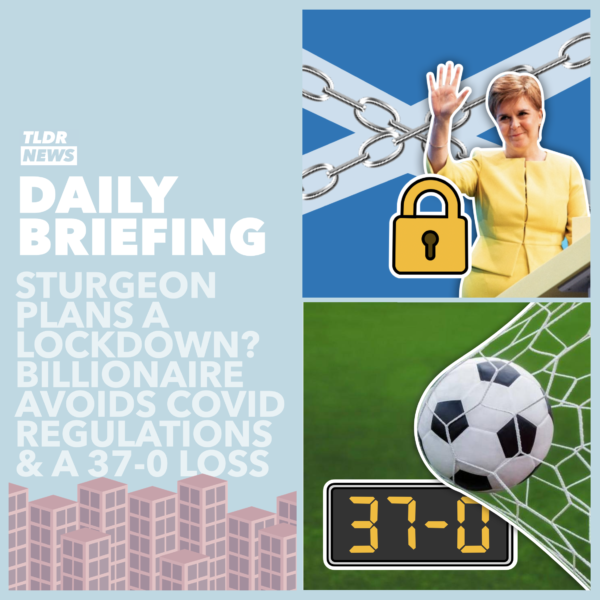 September 18th: A 37-0 Defeat, Sturgeon’s Weekend Plans and an Exemption to Isolation

Have you ever lost a match so bad it feels like you just shouldn’t have turned up? No… oh, erm, me neither. But then again, I’ve never really been into sport, but this is undoubtedly how I’d feel every time I stood on the pitch…

There is a team in Germany, though, who really really know how this feels. As in, they didn’t lose by one or two goals in their football match, but significantly more than this. They conceded, on average, a goal every two and a half minutes – losing by a massive 37 goals to 0. But is a team really that bad, or was there something else at play here?

For those of you who understand rhetorical questions, you’ll know that the answer is obviously yes. So let’s talk about how, exactly, this happened.

The coronavirus pandemic has meant that anyone that has been near someone who has tested positive for the virus must either undergo a test themselves or isolate at home – depending on which country you live in and the advice you are being asked to abide by. In this football match SG Ripdorf faced SV Holdenstedt II. The latter had previously faced a team, of which, a player had tested positive for the virus. Although all of SV Holdenstedt’s players tested negative for coronavirus, SG Ripdorf didn’t want to take any chance.

SG Ripdorf asked for the match to be delayed, which was refused – unless a fine of €200 was paid. This is a lot for a small football team.

So, instead, the game was played. With SG Ripdorf fielding only 7 players (the minimum number of players allowed to play), they attempted to socially distance themselves from their opponents. This meant staying 2 meters away from their players at all times, starting the match standing on the sidelines.

As anyone who has played, seen or is even aware of football knows – when the opponents don’t move, the game is particularly easier. This is even easier when you have 4 more players. This is how the 37-0 defeat made international headlines.

It appears that SG Ripdorf were penalised for trying to be socially responsible. This is why I don’t play football. Okay, maybe it’s because I couldn’t kick a ball to save my life, have precisely zero fitness, no skill with anything that requires even the smallest amount of movement and, to top it all off, absolutely no interest in mosts sports at all – but at least now I have a coronavirus-related excuse to add to the list.

In UK news today, while the coronavirus has been spreading quickly throughout the UK, governments have been quickly coming up with plans to try and halt this spread and ensure that a Christmas spent with family and friends is still on the table.

Although many don’t want to admit it, in order for this Christmas to be a reality, action must be taken now. The UK government has been reportedly discussing a reintroduction of national restrictions, in order to disrupt the spread. If introduced next week, this would only be for a short period. This makes sense, considering that Johnson’s government has been reluctant to commit to a full national lockdown again. If they were to do so, it would make sense for it to not be for long.

However, while this speculation has been looming – the devolved nature of the UK has meant that questions have been raised about the coordination of attempts to reduce the spread of coronavirus among the four nations of the United Kingdom.

In order to coordinate these responses the Scottish First Minister, Nicola Sturgeon, has asked UK Prime Minister Boris Johnson to chair a COBRA meeting over the weekend.

This comes on the same day that Ms. Sturgeon has given Scotland advance notice that ‘difficult decisions’ were set to be made over the weekend.

An Exemption to Isolation

In our last story today, we look at some international news about a purportedly unfair deal. As the pandemic rages on, coming to terms with the new rules to stop the spread is just a reality we all have to deal with. Well, almost everyone…

It has been reported that Liz Uihlein, a billionaire, has been granted an exception from Canada that excuses her from being made to observe a 14-day isolation period upon entering the country. She travelled from the US to Canada in her private jet to check on warehouses for her packaging company.

She has been a critic of coronavirus restrictions and has claimed that the pandemic is “overhyped”.

This story certainly asks questions about the coronavirus “great leveller” argument that was espoused at the beginning of the pandemic.