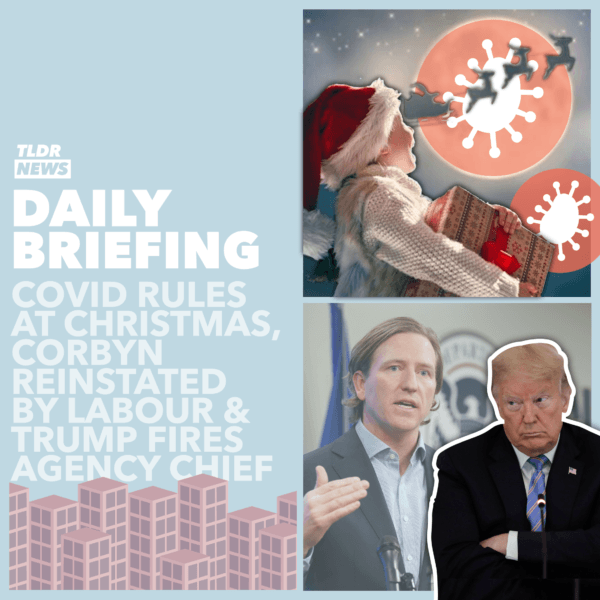 In the first story in the Daily Briefing today, we look at what the speculation surrounding the rule changes set to take place around Christmas Day. While many of us have had a tough year (to say the least), many have been looking to Christmas as a way of escaping the madness of the pandemic. However, there are no guarantees yet that Christmas will be this escape, after all, we are currently experiencing a deadly second wave and the government’s main priority will be trying to stop the spread of the virus.

Having said this, the government will also be aware that telling families that they cannot see one another on Christmas may not go down particularly well. So, the government has a very difficult balancing act to do: trying to allow some contact on Christmas to keep people on-side with the rules but also not allowing too much contact so as to spread the virus significantly.

Today, the newspapers have reported different potential rules the government could go with. It should be pointed out before we discuss these that the government absolutely hasn’t yet made any final decisions, and any decisions they do make will be contingent on coronavirus case numbers.

The first possibility, that has been discussed by former SAGE scientist Niel Fergussen, is that a ‘Christmas bubble’ could be introduced. This would allow around 4 houses to form a bubble and interact on the 5 day Christmas weekend. This plan would require people not to interact with anyone outside this bubble, and would need people to cease social contact for a period of time following the Christmas period. Another possibility, which was reported by The Sun, is an expansion of the rule of six. While the exact number is, obviously, unclear – if this proposal is implemented it is believed that under-12s would be exempt from counting toward the number.

We hope in the coming weeks the Christmas rules will become clear.

In the second story today, we stay in the UK to discuss the events surrounding former Labour Party leader Jeremy Corbyn in the last few days. It was only a few weeks ago that Corbyn was suspended from the Labour Party. Now, though, he has been readmitted to the party.

There is, however, a catch. Although he has been readmitted to the party as a member, the current leader (Sir Keir Starmer) has taken the decision not to allow Corbyn to sit as a Labour MP – he is continuing to withdraw the whip. As a result, Corbyn (despite being a Labour member) will remain sitting as an independent MP.

This will likely upset many of Corbyn’s allies and supporters who believe that his comments that antisemitism was overstated was a fair assessment. Others will support Starmer’s decision – claiming that Corbyn’s comments about antisemitism being overstated was uncalled for and simply wrong. They would likely claim that alongside the independent report finding that Corbyn had not done enough as Labour leader to tackle antisemitism, it is right that he should not be able to sit as a Labour MP.

Starmer has said he will keep the decision under review.

In the final story today, we go to the US to look at Trumps’ actions in relation to the election (again). We promise this will soon cease to be a regular feature of the Daily Briefing…

As a result of this, the President has terminated Mr. Krebs.

Now we’re not just saying this to wind up the president further, but I’d recommend checking out the CISA’s Rumor Control page, which debunks a bunch of electoral fraud myths. It may have angered the President, but it’s a really interesting, and considering it’s come from a federal agency, fairly neutral take on the issue – I mean it even features a video of Krebs on the page so what’s not to love. Anyway, we’ve used the source a number of times in our TLDR US videos and I’d definitely recommend giving it a read though, especially as Krebs lost his job over it – we’ve got to make sure the page gets enough traffic to make it worth it, right?

It has been reported that the president may also fire other officials with whom he has disagreements before he leaves office in January.