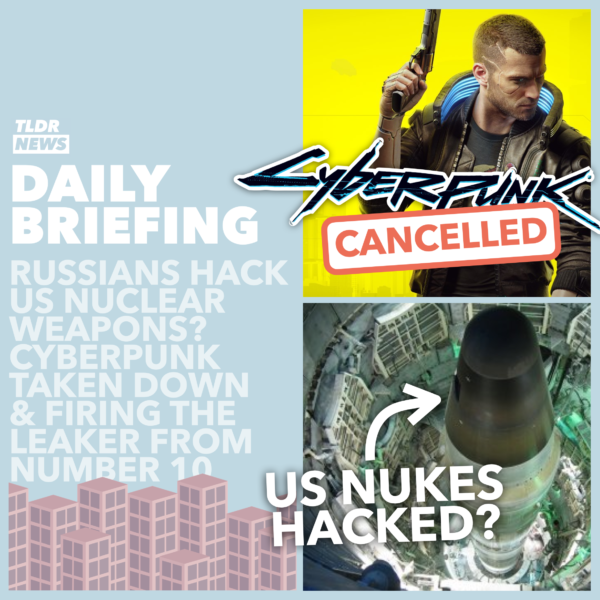 December 18: Cyberpunk Taken Down, Firing a Leaker, and Hacking Nukes

Before we start today’s briefing, just a heads up that we’re taking a break over the Christmas period, so you won’t be seeing new Briefings until the new year. So be sure to subscribe to the YouTube Channel, the podcast or the newsletter to be notified when we return – all of those are linked in the description of this episode.

In the first story of the briefing today, we discuss video games. Specifically, we’re going to discuss one of the most anticipated games of the year: Cyberpunk 2077. For those of you who don’t know, this is a video game set in a dystopian future – loosely based on the film Blade Runner. It features an open world map – and everything you would expect from a dystopian city. Big skyscrapers, futuristic cars and odd looking gadgets.

The game is reported to have cost around $330m to make, and has faced several setbacks. The pandemic has obviously made production a lot harder, and the game was delayed on several occasions in order to give staff the time to iron out the kinks. This meant that the developer received a lot of attention due to criticisms made over the welfare of their workers.

However, following it’s release – the next gen consoles (and PC version) garnered a lot of high praise. There was a lot of hype, but on the right system, the game lived up to it. On PC it received a Metacritic score of 87, for example.

On the last generation of consoles (Xbox One and PS4) technical bugs and performance issues have plagued the release infuriating gamers and made these versions significantly worse, and less playable, than the next gen and PC versions.

Due to these problems, the PlayStation Store have removed the game, making it unavailable for purchase. They have also offered refunds to those who have bought a copy of the game. This is very incredibly  uncommon for such a high profile AAA game.

Nonetheless, once the bugs are sorted out, the game will go back on sale on the PlayStation Store. Let’s hope that this doesn’t take long!

In the second story in the Daily Briefing today, we talk about a clever ploy to find a leaker. It is fair to say that over the last few months, the government has struggled with leakers. Many of the tier reviews have been leaked prior to the official announcement, and the November lockdown was leaked prior to it’s announcement (causing an impromptu press briefing on Halloween).

Today, though, the Chief Whip came up with a cunning plan to weed out a potential leaker. He decided to send out an email to ministerial aids about leaking. He worded the emails roughly as follows:

“there seems to be a lack of clarity in what is expected of you in your position as Private Parliamentary Secretary or Vice Chair … I would like to take this opportunity to remind you of the severe consequences that you will face, should you choose to breach the [Ministerial] Code.”

The leaker was revealed to be Andrew Lewer, the Parliamentary Private Secretary to Kit Malthouse (the policing minister). He maintains his innocence, claiming that “in nearly 20 years of elected office I have never leaked to the press”. Despite this, he was sacked.

In the final story of the briefing today, we discuss the news about a hack. Last night it was announced that hackers had made their way into many US federal departments, including Homeland Security and the Treasury. While very little is currently known about the hack, it is believed that hackers gained access by using malicious code on a piece of software used on government computers.

The U.S. Cybersecurity and Infrastructure Security Agency claim the attack was “well-resourced and focused”, adding that they posed a “grave risk” to the government.

Most shockingly, the Energy Department and its National Nuclear Security Administration was one of the departments that fell victim to the attack. Part of their responsibilities include maintaining the nuclear stockpile.

It is suspected that Russia could be behind the attack, but the investigation is ongoing.

Anyway, for those of you who think the news is too long… then you’re going to have to wait until the new year I’m afraid. We’re taking a break for the Christmas period, refreshing our batteries, planning new upgrades for the show and will be back in the new year. If you do want to be notified as soon as we are back then you can be notified by email by signing up to our newsletter at tldrnews.co.uk/daily. Listen to the briefing by searching for TLDR News in your podcast app. Or watch the briefing at youtube.com/tldrdaily.