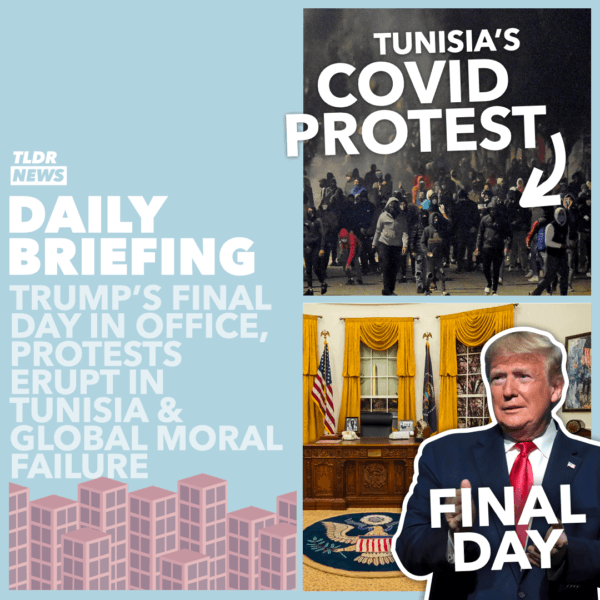 In the first story of the briefing today, we discuss news about the coronavirus pandemic from Tunisia. While many countries have been hit hard by the pandemic, and the resulting economic difficulty, very few have been hit as hard as Tunisia. Over the last few days, youths in Tunisia have clashed with police over the declining economic situation – which they see as affecting their generation particularly badly.

These protests happened in at least 15 different cities, and police have had to resort to tear-gas and water cannons to keep people under control. This is obviously a very serious situation – and it is probably worth explaining why this has happened. As we mentioned, it largely comes down to the economy.

There is a sense of despair among the protestors – a feeling that the economic pain from this will last for many years to come. This is probably not helped by the fact that unemployment among the younger generation reached 36.5% in 2020. Nor is it likely helped by the fact that the economy contracted by about 8% last year alone – largely a result of the huge decline in the tourism sector.

While Tunisia is an extreme case, this feeling of despair about the future is felt all over the world – with many wondering exactly how the pandemic will be paid for. This will likely become a big debate in the years to come, once vaccinations have been effectively deployed.

For the second story today, we will continue to discuss the coronavirus pandemic. While we’ve already discussed the economic hardship, it’s probably also worth discussing the more immediate problem: vaccine deployment.

You’ve probably heard us over the last few months discuss the various vaccines. We’ve discussed their clinical trials, the deployment within the UK, and the approval from regulators. However, we’ve not yet discussed the issue of ‘vaccine nationalism’.

This is the idea that wealthy nations horde vaccines in order to give it to their own populations and try and end the pandemic for themselves first. The issue with this approach is that poorer nations will be left without vaccines – and a disparity would emerge, whereby a younger less vulnerable person in a wealthy nation would be eligible for a vaccine before an elderly vulnerable person in a poorer nation.

In fact, this exact problem has been identified by the head of the WHO. Specifically, he said:

“I need to be blunt: the world is on the brink of a catastrophic moral failure – and the price of this failure will be paid with lives and livelihoods in the world’s poorest countries. Ultimately, these actions will only prolong the pandemic, the restrictions needed to contain it, and human and economic suffering.”

Let’s all hope that the vaccines can be better distributed around the globe so that this pandemic can be ended for everyone – not just those of us lucky enough to live in a wealthy nation.

In the last story today, we discuss Trump’s last day in office. Tomorrow is inauguration day – with Biden set to become the most powerful person on the planet at 12 noon. There’s a lot of speculation about what he may do upon gaining power – such as rejoining the Paris Climate Accords – but before we see any of this, we need to see what Trump is going to do first.

Trump is still the president, and still has considerable power. One such power is that of the presidential pardon. It has been suggested that at some point today, Trump is likely to release the list of those he is pardoning. Among the biggest questions about this list is whether Trump himself will feature on it. A self-pardon is certainly legally questionable, but he may try this anyway.

So, we’ll have to keep an eye on the news in the coming hours to see what else Trump may do and to see how the inauguration goes.