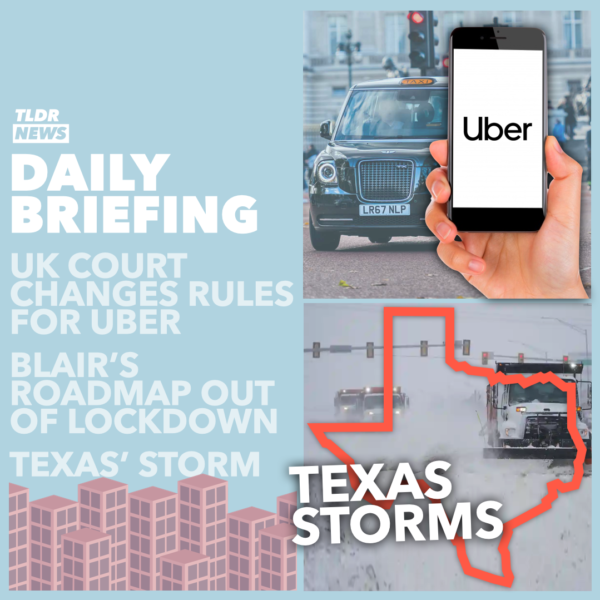 In the first story today, we go to Texas to discuss the fallout from a deadly storm. Earlier this week, a storm hit Texas that plunged the state into Arctic conditions – with some areas experiencing a temperature of -18°C (0°F). This caused huge disruption to essential services, such as water and electricity. Widespread outages have forced people to queue for water, move in with relatives (despite the coronavirus concerns), and use lamps for lighting.

The state has advised that all water set to be consumed should be boiled due to contamination concerns, and that bottled water should be consumed if possible (even when doing things such as brushing teeth). Not only has this storm caused such a disruption in people’s daily lives, but it has also sadly already claimed almost 50 lives.

In the news today, the Texan senator Ted Cruz has come under fire for leaving the state to go on a family holiday in Mexico. He returned yesterday following such scrutiny. Mr. Cruz has stated that he believes his decision to go on holiday was a “mistake” and that he understood why some people were “upset”.

President Biden has approved a state of emergency in Texas following the storm, although temperatures are set to increase in the coming days.

Our thoughts are with all those affected by the storm.

For the second story today, we move to the UK to discuss a former Prime Minister – Tony Blair. Since leaving office, Mr. Blair has established the Tony Blair Institute (TBI), which looks to advise the government. It has been reported that the institute retains strong links to Whitehall.

Today, they have revealed their version of the ‘roadmap’ out of the pandemic – the real version of which is set to be announced by Prime Minister Boris Johnson on Monday. Blair’s version of the roadmap is based on certain ‘triggers’ that would allow certain activities to resume.

Currently, the R-number is between 0.7 and 0.9, and the weekly case numbers per 100,000 are 138. This means that if the TBI’s roadmap were implemented, then schools would be open.

The triggers also specify when it would be safe to reopen non-essential retail, hospitality and ditch the coronavirus restrictions entirely.

Some people here will be wondering why we’ve included this story today. After all, it is a story about what a former Prime Minister would have done if they were still in charge. At the end of the day, Mr. Blair isn’t in charge and has about as much power over policy as I do (absolutely none).

But, we think it’s important to discuss for two reasons. Firstly, now we can compare on Monday whether the Prime Minister is being more or less cautious, and we have something to measure his approach against.

Secondly, it is possible that Monday’s roadmap could be similar to the roadmap presented by the TBI. In fact, The Telegraph have suggested that it’s not only possible, but “probable”. So, this story could be an indication of things to come.

In the third story of today, we stay in the UK to discuss a groundbreaking decision in court about the work status of Uber drivers. The UK Supreme Court has today ruled that Uber drivers must be classified as employed, rather than self-employed. This means that they are entitled to the UK minimum wage and holiday pay, something that will undoubtedly prove very costly to Uber and other ‘gig-economy’ employers.

This will likely be received as good news among those who work as Uber drivers, as they have seen their work decrease by about 80% over the course of the pandemic – which, due to their self-employed status, has left them with a massive reduction in earnings.