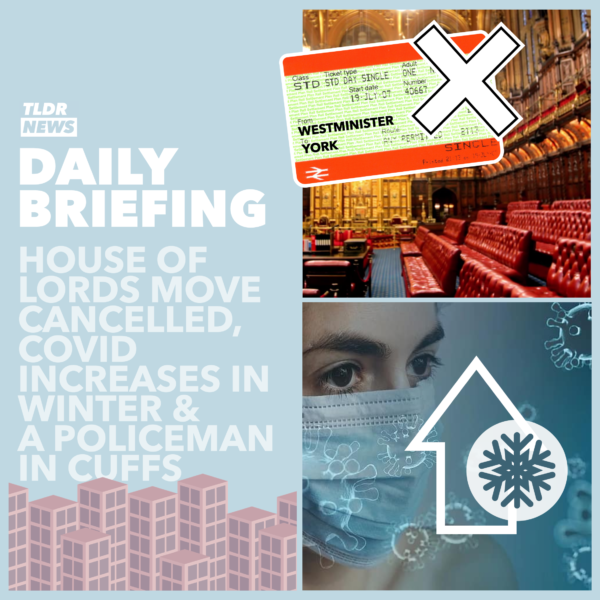 August 19th: The Handcuffed Policeman, The Cancelled House of Lords Road Trip and COVID-19 and Winter

We thought we’d start today’s Daily Briefing with some lighthearted news about a UK police officer. We’ve all had those days at work or school when things don’t quite go our way and we seem to make some big, fairly obvious, errors. For this Northamptonshire Police Officer, this error was, well, pretty embarrassing.

During a demonstration to new recruits about how to use handcuffs, the officer who was leading the meeting got himself stuck in handcuffs. This required him to seek assistance from the Fire and Rescue Service – about which he said that he “would rather have chewed my arm off than call the fire service”. Unfortunately for him, he had to walk with the handcuffs on, to the Fire Department to be freed.

His colleagues joked that he would have a serious “cake fine” and would undoubtedly be left with a “career-long nickname”. He claimed that he didn’t mind that it happened as long as it put a smile on peoples’ faces.

At least the officer had a good sense of humour about it.

In other UK news today, it has been announced that possible plans to move the House of Lords to York have been cancelled. The original plan, supposedly backed by Prime Minister Johnson, was to temporarily house the Lords in York while renovations were taking place at the Palace of Westminster.

The government has said that it is still keen on trying to move the Lords out of London – which they claim demonstrates their commitment to “levelling-up” areas such as the North.

This idea has come under fire, though, with the Lords Speaker Lord Fowler claiming that it was “gesture politics”.

Exactly what will happen with the Lords is, as yet, undecided.

In other news today, it has been found that winter may cause a resurgence of COVID-19. Evidence has been growing in the last few days that due to the cold, dry air that winter brings, COVID-19 may increase the human-to-human transmission of the virus.

According to a study published in the Transboundary and Emerging Diseases journal, for every one percent drop in relative humidity, there is an increase of confirmed COVID-19 cases of around 7-8%.

They also found that cities that have experienced an outbreak of COVID-19 were around the same latitude and had a similar mean temperature of 5-11°C.

This will inevitably raise some rather big questions for government who are currently trying to stop a second wave of the virus.

Exactly what Christmas and New Year will look like is yet to be known.