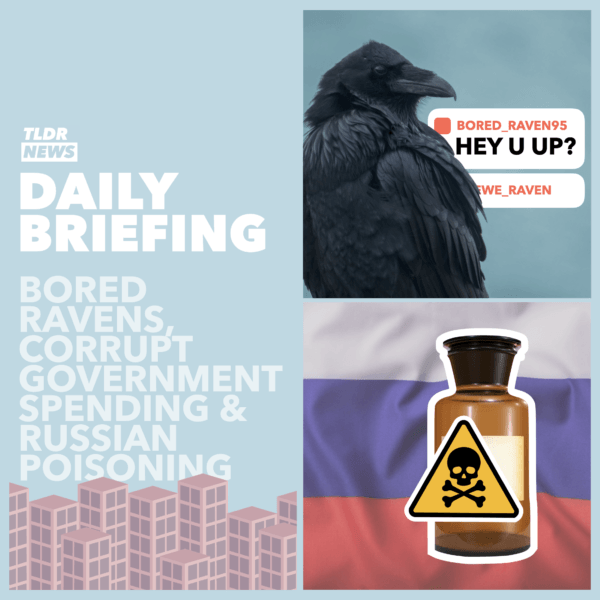 The Bored Ravens of London

In some pressing international news today, it has been reported that the mystical ravens of the Tower of London have been fleeing. Luckily, it is not due to anything serious – it’s just that, like the rest of us, they are bored in lockdown.

Apparently, there have been many, many fewer tourists as a result of lockdown – so the birds are leaving to go elsewhere to find the attention they were used to prior to the pandemic. Visitors to the Tower pre-pandemic usually exceeded 15,000. In the pandemic, this has dropped to 800 a day.

Legend has it that if the ravens leave the Tower, then the Tower – and the monarchy alongside it – will collapse. Charles II was the first to heed the legend – by insisting the ravens were protected – so for the monarchy’s sake let’s hope tourists start dropping food near the Tower again soon…

In more serious UK news today, The Guardian has reported that the government has given multiple contracts, which have been uncontested, to consultation firms whose job it has been to advise the government.

Apparently, 16 companies have been awarded contracts to consult on a wide range of issues from the track-and-trace system to the procurement of personal protective equipment (PPE). These contracts have totalled a huge £56m. The Guardian reports that the contract given to McKinsey worked out at around £14,000 a day to come up with a replacement for Public Health England.

Usually, this wouldn’t be allowed – but due to exceptional powers given to public bodies – it now is. Contracts can be awarded without competition, including to consultancy firms, in order to speed processes up.

This relates directly to another issue we discussed in a recent video, where emergency government contracts were being used to buy vast quantities of PPE from seemingly pretty dodgy companies, even some that were run by government affiliates. To find out more about that check out the video we made on the topic.

The Suspected Poisoning of Alexei Navalny

In international news today, it has been alleged that Russian Opposition Leader Alexei Navalny has been poisoned while travelling by plane to Moscow. The plane had to make an emergency landing in Omsk. It has been claimed that something was likely mixed into his tea.

Mr Navalny has been an outspoken critic of Mr Putin, and even had the police raid his foundation in 2019.

He has also been charged with embezzlement in 2013, which he claims was politically motivated. Due to his charges, he was unable to stand for president in the 2018 presidential election.

The Kremlin has wished him a speedy recovery.

We will keep you updated on this story as it progresses.

For those of you who think the news is too long, be sure to check out tomorrow’s daily briefing. Read the newsletter by signing up at tldrnews.co.uk/daily. Listen to the briefing by searching for TLDR News in your podcast app. Or watch the briefing at youtube.com/tldrdaily.