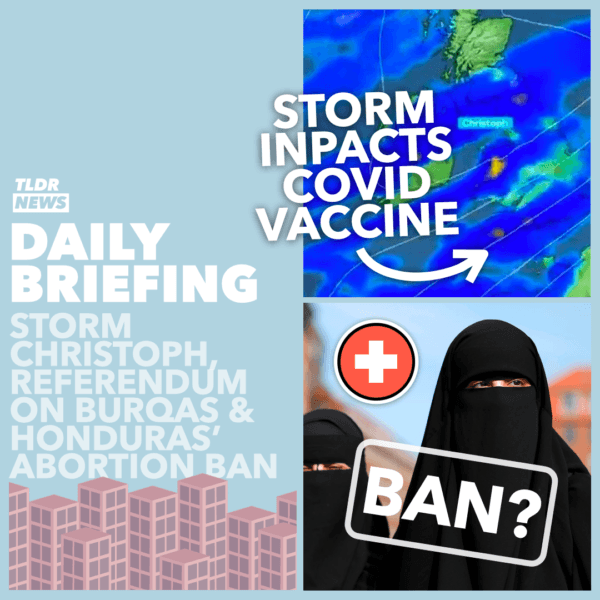 Last week we told you about the TLDR flag survey where we’re trying to find the world’s best flag. Since then about 9000 people have voted, casting 966745 total votes. Now, we don’t know about you but that’s annoyingly close to 1 million votes. So if you want to lend us a hand click the link to the survey here. From there you can rank a bunch of random flags, and every ranking gets us one vote closer to a million. Thanks so much for your support!

In the first story of the briefing today, we discuss the ongoing Storm Christoph that has hit parts of the UK in the last week. Specifically, Storm Christoph has affected areas in Greater Manchester and parts of Wales. Severe flood warnings remain in place, with some 2,000 homes being evacuated.

While the situation is already perilous as it is – what makes this even more worrying is the fact that the floods are expected near some of the factories that are producing the coronavirus vaccine. Luckily, emergency services were on hand last night to install sandbags and pumps near these sites in order to ensure that they can remain fully operational.

While this is good news for the vaccine, the current situation with coronavirus makes the decision to evacuate quite difficult for residents. Residents have been reminded that the coronavirus restrictions allow people to leave their homes in an emergency – something a flood can reasonably be defined as. However, this doesn’t stop coronavirus being a concern. Many are worried about where they should evacuate to and who to move in with. This is one of the most dangerous moments in the pandemic – with more people in hospital than at any point in the last year. So it’s fair to say that this worry is justified.

For the second story today, we move to discuss some news in Honduras. This week, politicians in Honduras have decided to push through a law that would make it near-impossible to legalise aborition in the country. Honduras already has a strict approach to abortions – with it being banned entirely. It has also banned the use of emergency contraceptives in all circumstances, including rape.

In most democracies in Europe, the threshold for a constitutional amendment is two-thirds. The thought-process behind this is to ensure that any changes are not dictated by the politics of the day – a huge proportion of legislators must agree that the changes are right for the country. It also means that, normally, politicians from multiple parties must agree on a change.

In Honduras, in order to change the rules on aborition, a three-quarters majority is required. This is a huge increase, and means that any changes to the rules will be difficult to make in the future. It’s even more of a hurdle when you consider that an amendment to decriminalise abortion in the case of rape or incest was only voted for by 8 of the 128 legislators.

The new “abortion shield” is expected to pass in the next week.

A Referendum on Burqas

In the last story today, we discuss a referendum set to take place in Switzerland in March this year. This referendum is going to ask the Swiss people whether they want to ban Burqas being worn in public. It is being put to the people because a petition by the Swiss Peoples’ Party gained more than 100,000 signatures – which immediately triggers a referendum. The government is urging people to vote down the amendment. One reason they gave was that it would decrease tourism – alongside claiming that it would “not help the women concerned”.

They also claimed that this move would not “improve security” either.

Some areas of Switzerland (known as ‘cantons’) have already banned Burqas – this referendum is set to decide whether a nationwide ban is appropriate.