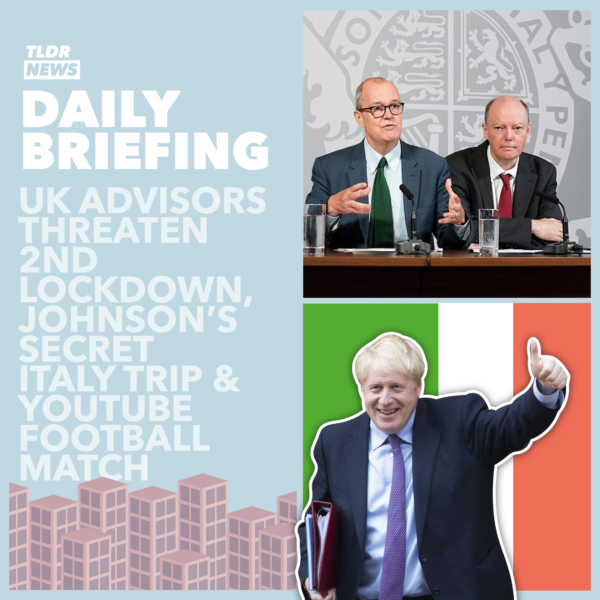 September 21st: A #NightToRemember, Whitty’s Warning and Some Fake News

As a YouTube based team ourselves, and with our Team TLDR Fantasy Football League off to a competitive start, we would be remiss not to mention a story that is undoubtedly a landmark day for the platform.

Hashtag United, a team founded by popular UK content creator Spencer Owen, will be taking on Soham Town Rangers in the FA Cup First Round Qualifying live on BBC Sport tonight at 19:45. Tonight’s match will mark the first time a YouTube-based team has ever been featured for a live-terrestrial audience and is another major step for YouTube content creators breaking into the mainstream.

Founded in 2016, and joining the English football league pyramid in 2018, the club have amassed over 500,000 subscribers, over 73 million views on YouTube and play in the Essex Senior League (8 tiers below the Premier League). Since becoming a non-league side, Hashtag United have also created a Women’s team, a reserve team and an entire youth set up.

While we at TLDR strive to be unbiased in our reporting, we think we can make an exception and show our support for our YouTube colleagues. Come on the Tags!

In UK political news today, the Chief Medical Office and the Chief Scientific Officer have made a statement to the British public, demonstrating the threat of coronavirus is increasing – possibly even setting the tone for the statement from the Prime Minister that is expected at 12:30pm tomorrow.

In this presentation, it was claimed that if no new restrictions are introduced in England, cases could rise by 50,000 a day by the middle of October. This was included alongside a stark reminder that we must all do our bit to stop the spread of this virus – and that this is everyone’s responsibility.

The Prime Minister said a few months ago, in stark contrast to one of his predecessors Margaret Thatcher, that “there is such a thing as society”. Well, it appears today that not only do the scientific advisors agree with him, but they believe that responsibility to stop the spread lies with them.

We will see tomorrow whether the Prime Minister’s statement follows the same kind of tone.

In other UK news today, we are going to discuss a rather… weird story.

Today started off with reports that Prime Minister Johnson took a trip to Perugia in September, around the time that former UK Prime Minister Tony Blair did. The story likely gained traction because, in the past, Johnson has slipped off to Italy to attend parties without a security detail.

Obviously, the speculation was trying to insinuate that Johnson should not have been there, as coronavirus cases were beginning to rise again in the UK. The fact that, if this trip did go ahead, it was apparently hidden from journalists and the public is additionally not a good look for the Prime Minister.

As this would be big news if it was proved, the speculation about it has been, well, pretty big today. It even resulted in cabinet minister Grant Shapps being asked about the Prime Minister’s whereabouts in an interview with Sky News. Despite his insistence that he didn’t know whether Johnson was there – this lack of outright denial didn’t help ease the media storm.

However, Number 10 has denied the story all day. It seems that this denial has finally been proven, with the President of Perugia airport claiming that the original press briefing, from which this story is based, confused former Prime Minister Tony Blair (who did go to Perugia) with current Prime Minister Boris Johnson (who did not). He claims that Prime Minister Johnson “definitely” didn’t visit Perugia.

So, it seems like this has been a story that has not proved to be as juicy as some people wanted. Turns out that, in this case, the situation has been explained by confusion, not conspiracy.