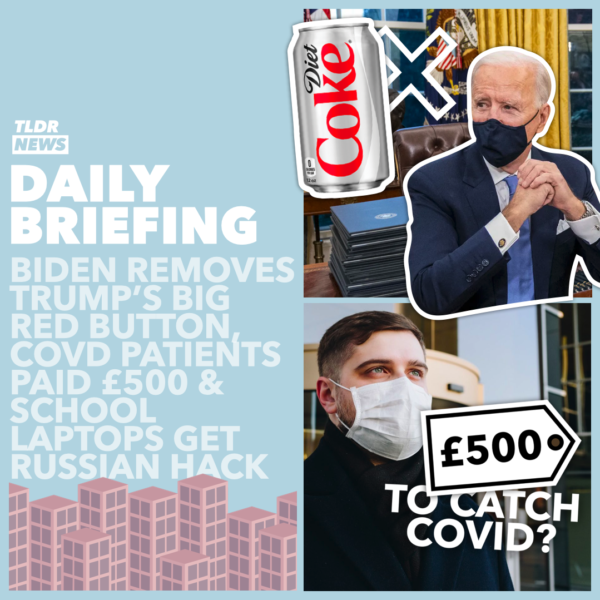 In the first story of the briefing today, we discuss the big red button that President Trump had on his desk. No, it doesn’t detonate a nuclear device – despite what the movies have us believe – instead it called in a butler to serve the President a diet coke on a silver platter. It has been reported that Trump had some fun with this, though, and would often “prank” guests by randomly pressing the button in the middle of the meeting. He would then laugh when the butler came in with a coke – presumably because he believed that the guest assumed it was related to the US nuclear arsenal.

Well, it seems that Biden is not a fan of the button – and has no plans to “prank” any of his guests with it. As a newly elected president, Mr. Biden has had the opportunity to change the interior design of the Oval Office. He has already moved the bust of Winston Churchill out of the office. This is worth noting because in 2016, the then Mayor of London Boris Johnson, called Obama’s decision to move the bust out of the office a “snub”. He elaborated further, claiming that Obama’s decision may have been influenced by “the part-Kenyan president’s ancestral dislike of the British empire”.

Number 10 was asked to comment on the removal of the bust yet again, now by President Biden. As you would expect, it took a rather more relaxed view than Mr. Johnson took in 2016. The Prime Minister’s official spokesperson said: “the Oval Office is the president’s private office, and it’s up to the president to decorate it as he wishes”.

So, perhaps the next president will reinstate the bust and the button!

If you want to find out more about what Biden did in his first day, including the 15 executive orders he passed, then check out the latest video on the TLDR US channel – it’s linked below.

For the second story today, we move to the UK to discuss an idea that has been leaked and floated around the various newspapers today: that those who test positive for coronavirus will receive a one-off payment of £500. It should be noted off the top that this is mere speculation at this point – and it has not yet been confirmed that this idea will become a reality.

However, if true, it would alleviate some of the financial burden that lower income families experience when they are instructed to self-isolate upon testing positive. So while this is undoubtedly a positive – what are the negatives? Because, after all, we’ve been in the pandemic since March. If this was an overwhelmingly positive idea – why hasn’t it been implemented yet?

Well, of course, there is the possibility that officials never considered it, or possibly that they hadn’t understood the true impact of self-isolating for lower-income families. There is also the possibility that the cost of such a scheme was off-putting. It has been suggested that this scheme would cost around £453m a week. This would increase the cost of payouts by twelve times.

The BBC has suggested that this huge cost is indeed the reason that it has not yet been implemented – and what makes such a proposal unlikely to be implemented any time soon.

Having said that though, the government has not shied away from forking out huge sums in order to try and alleviate some of the problems caused by the pandemic. It’s hard not to compare such an idea to the Eat Out to Help Out scheme whereby the government paid for 50% of meals eaten in restaurants last year. Even schemes like furlough demonstrate the radical fiscal policy the government have embarked on.

So, while it does definitely seem like a radical policy – and one that would be laughed out of the room outside of a pandemic – it’s hard not to take it seriously when other previous schemes are considered.

In the last story today, we stay in the UK to discuss a story relating to school laptops. Specifically, the news that some laptops given to children during the pandemic have contained malware. The malware seems, so far, to only have affected children in one school in Bradford.

Due to the pandemic, many children are currently attending classes virtually at home. As such, they require some form of computer in order to take part. The Department for Education has been providing laptops to some children in order to ensure they can participate. In total, around 800,000 laptops have been provided.

However, as we mentioned, one school in Bradford found that something extra came with their laptops: a worm. It has been reported that the specific worm in question is called Gamarue.I, and was identified by Microsoft in 2012. It is problematic as it is self-propagating, and it collects data on users – such as browsing activities and possibly even banking details. It has also been suggested that the virus connects the users’ computer to a Russian server.

So, it seems that in order to help disadvantaged children cope with the virus, the Department for Education has sent them a computer loaded with a virus. Kind of ironic.

For those of you who think the news is too long, be sure to check out monday’s Daily Briefing.