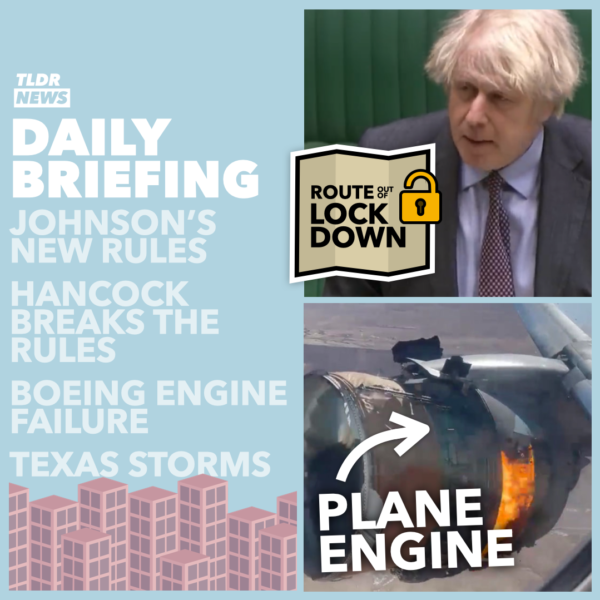 Britain’s Route out of Lockdown

In the first story today, we move to the UK to discuss today’s lockdown easing. Unfortunately, due to the constraints of producing video content, the Daily Briefing has to be written by the early afternoon for it to be out in time. This means that we don’t yet have the full details.

However, it has already been announced that schools will reopen on the 8th of March. Today, the government has readmitted that this will be the case. They have also announced that, on the same date, people in England will be allowed to socialise outdoors with one person outside their household bubble. Currently, people are allowed to exercise outdoors with someone outside their household bubble, but they cannot sit and have a picnic or sit on a bench and drink a coffee, for example. This is the change, supposedly, set to happen on the 8th March.

Later in the month, on the 29th March, people are expected to be allowed to meet in groups of up to six or two households outdoors – including in a private area (such as a garden).

Johnson has been expected to announce a wider, and longer, roadmap to ease us out of the current lockdown restrictions – although, at the time of writing, we don’t know what they are.

For the second story today, we stay in the UK to discuss the controversy around the Health and Social Care Secretary, Matt Hancock, and his delay in publishing coronavirus contracts. Specifically, the controversy is around the fact that a judge has ruled that Mr. Hancock acted unlawfully in delaying publishing the contracts – something he refused to apologise for on the Andrew Marr show on Sunday.

Mr. Hancock was required to publish details of contracts signed within 30 days (if they were worth more than £120,000), which he claimed he didn’t do as he (and his team) were focussed on buying huge quantities of personal protective equipment – something the UK was in dyer need of at the beginning of the pandemic. He added that his team were often working 18 hour days and many were working 7 days a week.

In fact, quite boldly, Mr. Hancock said to Mr. Marr:

“You tell me that that’s wrong. You can’t and the reason you can’t is because it was the right thing to do and legal cases about timings of transparency returns are completely second order compared to saving lives”.

Mr. Hancock also rejected calls for him to resign over the issue. What do you think about this issue, though? Let us know in the comments below.

In the third story of today, we move to the US to discuss the aircraft whose engine broke down and started dropping over Denver over the weekend. According to Boeing, whose engines broke down, the fault was to do with the engine itself and accordingly, all of the Boeing 777 planes in operation that day (who used the same engine) were grounded.

In total, 128 planes were grounded.

The engine fire happened on United Flight 328, which was headed to Honolulu in Hawaii. The incident happened just after take off, causing debris to be deposited all over Denver, with people finding parts of the plane in their back gardens or in their streets.

Luckily, no one was injured.

In the last story today, we go to Texas to discuss the ongoing storm crisis hitting the state. Following a huge storm, many in Texas have been left without power or clean drinking water. This has caused many to have to move in with friends and family (even despite the risk from coronavirus), or queue for water and live without heating and electricity.

It has been discovered over the weekend though, that even those who have been lucky enough to retain their access to water and electricity have had to pay huge amounts for the privilege. Some residents have claimed that they have had to pay $16,000 for just a few days of power.

This is largely down to the increased cost of power, decided by Public Utility Commission of Texas. Those on a fixed rate tariff have been unaffected, but those on variable have these huge bills come their way.

The mayor of Houston has suggested that the state should pay for people’s electricity – due to these truly monumental bills. Nothing has yet been decided though.