Home Daily Briefing Mar 22: The PM vs the EU, Bristol Riots, IKEA on trial, and AI vs Scammers 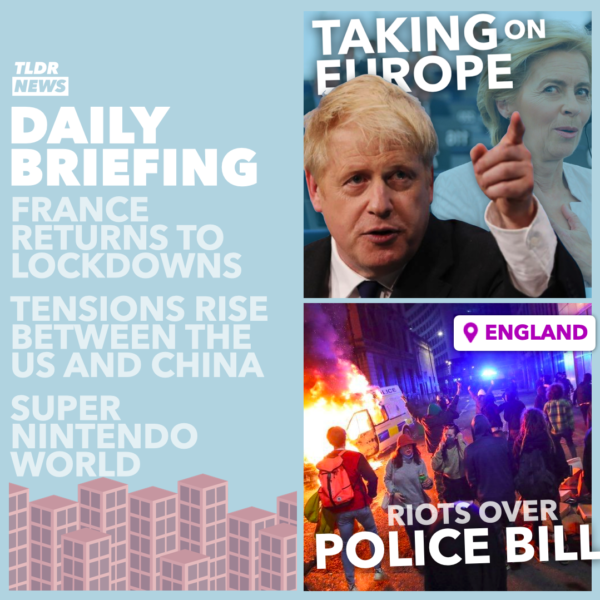 Mar 22: The PM vs the EU, Bristol Riots, IKEA on trial, and AI vs Scammers

The PM vs the EU

In the first story of the Daily Briefing today, we discuss the Prime Minister taking to EU leaders to try and ensure that vaccines keep flowing into the UK. The issue of vaccine distribution seems to be a pretty significant one across the world at the moment. While the vaccine has been developed and is in production – demand remains incredibly high and everyone’s keen to get as many as they can. Some countries’ have production facilities within their borders, but due to other countries’ deals made with the manufacturers, they are not able to get their hands on the vaccines.

This has been the case in the EU – specifically in the Netherlands, where the AstraZeneca vaccine is being produced, but many of these Dutch produced doses are headed for the UK before the EU, much to the dismay of Europe.

One proposed solution to this, from the EU’s perspective, is simply to block exports of the coronavirus vaccine to the UK. In fact, a meeting is planned for Thursday for EU leaders to discuss this plan. In an attempt to stop this block from coming into existence, Prime Minister Boris Johnson will call European leaders to try and persuade them to oppose it. It has been speculated that Emmanuel Macron (the President of France) and Angela Merkel (Chancellor of Germany) are high on his list of people to call.

The EU are not too happy about this plan, with an official claiming that “As in the past, seeking division among the member states will not succeed”.

What do you think though? Is it fair for the UK to benefit from the vaccine development while the EU falls behind?

In the second story today, we stay in the UK to discuss some riots that have occurred in Bristol. As we discussed in a video last week (that video’s linked below) the government has recently tried to introduce the Police, Crimes, Sentencing and Courts Bill. It has currently cleared the first and second reading, and is set to go on to the committee stage – although, it seems like the government has pushed this back to the 24th June.

Nonetheless, the bill proved to be controversial, with huge protests taking place across the UK as many saw it as the government attempting to curtail the right to protest. Of these protests, one of the largest of these protests took place in Bristol yesterday.

This protest was called the Kill the Bill march, and while things started off peaceful, it swiftly got violent. It actually ended with some of the protestors storming a police building, with police cars being set ablaze and around 20 police officers themselves being injured. Two of these police officers had serious injuries – one of them left with a punctured lung.

So far, six people have been arrested. Pictures have been released by the police, too, in an attempt to find the other protestors who were responsible for the crimes committed.

What do you think though? Is the bill objectionable and even if it is were these protests the right move?

In the third story of the Daily Briefing today, we move to France to discuss a trial involving IKEA. We all know the fun of going to IKEA – debating which bits of furniture to buy, maybe treating yourself to some quality meatballs, and potentially even being pressured into buying a djungelskog.

Well, as it turns out, this whole experience might not be as wholesome as first though. Well, in France at least. It is alleged that IKEA France established a “spying system”, that included the use of private investigators and police officers. Both employees and customers were, allegedly, snooped on.

In emails from 2012, that were leaked to the satirical newspaper Le Canard Enchaîné, it was allegedly revealed that the former director of risk-management at IKEA France (Jean-Francois Paris) presided over investigations into employees who attended protests – with concerns arising that they were at risk of becoming an “eco-terrorist”.

We will have to wait and see what the outcome of the trial is. So far, all we have are allegations.

Before we start this story, it’s important for us to point out that we do not endorse scam-baiting – and that we urge you not to try it yourself.

In our final story today, we discuss an ingenious way of dealing with scammers. As you may already know, the pandemic has seen a rise in scammers trying to convince people to part with money online. One particularly shocking fact is that so-called “romance fraud” increased by 20% in 2020, compared with 2019. This led to a huge £68m being taken from unsuspecting victims.

While many of us want to do something to get back at these scammers, it is often simply not possible. Well, it seems, there is one man who has quite a lot of experience at making the scammers’ jobs harder. You may have even seen one of his videos yourself on YouTube or TikTok.

We’re talking about Kitboga. He uploads videos of him wasting scammers time. In some videos he simply deliberately misunderstands their instructions, in others he follows them right up to the last moment – just as they think they’re about to get their hands on his money – when he misunderstands their instructions. In both cases, the scammers are left rather frustrated.

While many clearly find this sort of video satisfying (potentially due to karma unfolding before our very eyes), the issue is that he is just one man, and he can only waste so much of the scammers’ time.

Well, to rectify this issue, he is in the process of developing an AI bot that understands what the scammers are saying on the phone, and then plays back a pre-recorded sentence from Kitboga. At the moment, it is having some teething issues – such as playing back the same clip of audio a number of times on the same call – but it’s hard to argue that it hasn’t already had a good start. After all, training AI is no easy task.

In an interview with the BBC, Kitboga has stated that “if I could keep them on the phone for an hour – that was an hour they weren’t speaking to someone else”. If the AI bot succeeds, then scammers will be wasting more and more time talking to an AI bot, and less and less time talking to actual people.

What do you think about this, though? Is this an ingenious creation that will stop people giving money unintentionally to scammers – or is this a pipe dream? Let us know your thoughts in the comments below.