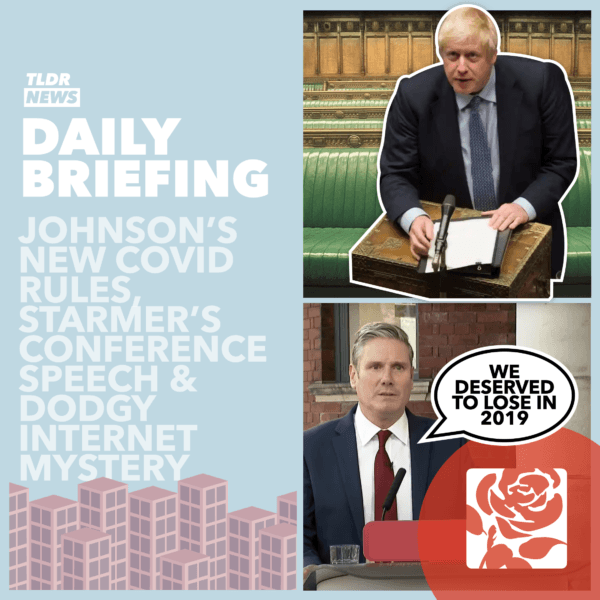 September 22nd: The Mystery of the Dropping Internet, Starmer’s Speech and Johnson’s Speech

The Mystery of the Dropping Internet

We’ve all had bad internet – and we all know how frustrating it can be. But, imagine if this happened every morning, without fail, at 7am. Imagine waking up, making your cup of tea, getting ready for work and sitting down to watch the latest TLDR News video only to see that, yet again, the internet has gone down.

Well, for the small village of Aberhosan in Wales, this was a reality for 18 months. The question everyone wanted answering, though, was why was this the case? What was causing it?

The cable company, Openreach, replaced (you guessed it) the cables, expecting this to solve the issue – but this was to no avail. So, they used a spectrum analyser to see if there were any devices in the village that could be causing interference. This is where the problem arose.

It was discovered that every morning, one person in the village would turn on their old TV set. This TV caused electrical interference strong enough to knock out the whole village’s internet. When told about their neuciance TV, the resident was very keen to make clear that it would not be used again.

The story has a happy ending though, and since the TV’s broadband-cutting feature was discovered, the internet in the village has remained stable and residents can watch TLDR News unencumbered.

In British politics news today, Opposition Leader Keir Starmer has made a speech to the Labour Party conference about the 2019 election. In this speech, he said something that seems unlikely to hear from the leader of the losing party: we deserved to lose. Yes, he really said this.

He claimed that in a democracy, when you lose an election, you do not blame the electorate – instead you should look at yourselves. He said this alongside a shocking statistic that Labour has had as many election-winning Prime Ministers in 75 years as the Conservatives have in 5 years.

Although this may seem an odd strategy from Starmer, highlighting the failures of his own party, it seems like he is using this to show that Labour needs to change if it wants power. For Starmer, he believes he is this change. He is trying to present Labour as a credible alternative to the Conservatives – a party that is willing to put the nation above the party and back the government when necessary.

Others, though, will be critical – claiming that Starmer is splitting the Labour Party into the old, left-leaning members who are to blame for their lack of power for a decade, and the new more centrist members who are (according to him) going to be the saviour Labour needs.

The same critics may argue that failing to criticise the Conservatives isn’t in Labour’s interests – and that Starmer is selling out for no good reason.

Nonetheless – this speech will likely be a controversial one Mr Starmer.

In the last story today, Prime Minister Johnson has also made a speech – seems like it’s been a very good day for the speech lovers out there!

Although this speech was about the changing coronavirus restrictions, it was not made at Number 10 Downing Street. This likely follows the criticism levelled at the Prime Minister by the Speaker of the House Lindsey Hoyle. Nonetheless, the change of scenery was refreshing.

While cases have been rising in the last few weeks, the government has known that more restrictions were needed to stop England experiencing a second wave of the virus. For this reason, the Prime Minister has introduced the following rules:

While no-one wanted the rules to be tightened, the government believes this is what is needed and have stressed that these rules will remain for 6 months unless things get better. Keir Starmer has made clear that Labour back the rules and encourage citizens to follow them and respect the Rule of Law.