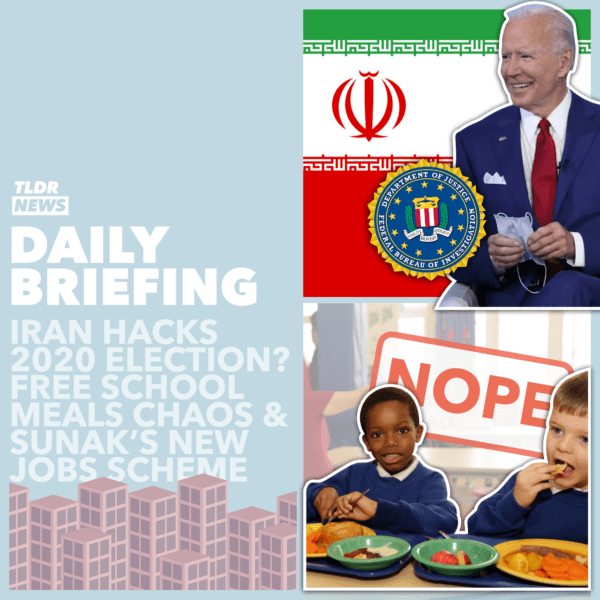 In the first story in the Daily Briefing today, we have big news from the US – and, much like four years ago, it is an announcement of an FBI investigation just a couple of weeks before polling day. Yesterday evening, Director of National Intelligence, John Ratcliffe, alongside Director of the FBI Christopher Wray, announced that Iran and Russia had ‘obtained voter registration information’ which could be used to spread ‘false information to cause confusion and chaos’ in the final weeks before the election.

The main allegation seems to be that Iran has been sending threatening emails to Democrat voters seemingly from the far-right Proud Boys, basically implying that if the recipient does not vote for President Trump they will be in danger. Supposedly, this is intended to drum up support for Trump’s opponent, Joe Biden, by associating Trump with a group such as the Proud Boys. This will only accelerate the President’s claims that the election is rigged. Democrat leaders, such as Chuck Schumer, have been keen to express that this meddling should be seen as an attack on election integrity rather than just Mr. Trump.

There are a few caveats to note about this story at its early stage. First of all, it is not confirmed at the time of writing whether the ‘information’ sourced by Iran was already publicly available or involved hacking. Secondly, there is no evidence that this is election meddling in the sense of removing voters from the registered databases, which would concretely impact people’s ability to vote.

In UK politics today, the government has been facing intense backlash both online and in the newspapers following its refusal to back a House of Commons motion that would ensure that those who need free school meals continue to get them over the holidays.

This proposal was introduced by the Labour Party and attempted to extend the free school meals program to the upcoming half-term holiday. The government has suggested that it’s reason for not backing the proposal was because other schemes – such as universal credit – would suffice. They also argue that expecting schools to open and provide meals to children in the holidays would be an unreasonable burden to put on them.

Although this was the line by government, five Conservative MPs remained unconvinced and actually voted for Labour’s proposal. They weren’t the only ones unconvinced by the government’s argument – the Daily Mirror’s front page today featured the word ‘CRUEL’ filled in with the names of all the MPs who voted against the motion.

In addition to this, Marcus Rashford (the footballer who first put pressure on the government to introduce such a policy), later tweeted that “these children matter, these children are the future of this country”, in a clear criticism of the MPs who voted against.

Exactly how much the government will be undermined due to this fiasco is still yet to be seen.

Today, though, he has admitted that businesses trying to operate under Tier 2 restrictions are also facing hardships, and has therefore introduced three changes. The first allows such businesses to receive grants of up to £2,100 per month.

The second change is reducing the number of hours that must be worked in order to be eligible for the Job Support Scheme – from 33% to 20%.

Whether people will think that these measures are enough is yet to be seen.

The 'Too Long; Didn't Read' Podcast

If you’re keen to hear us discuss issues like this in more detail, the latest episode of the Too Long Didn’t Read podcast has literally just been released. In the episode the team discuss Manchester, Prime Minister’s Questions and the latest Brexit developments. Anyway there’s a link to the podcast and the podcasts YouTube channel in the description.