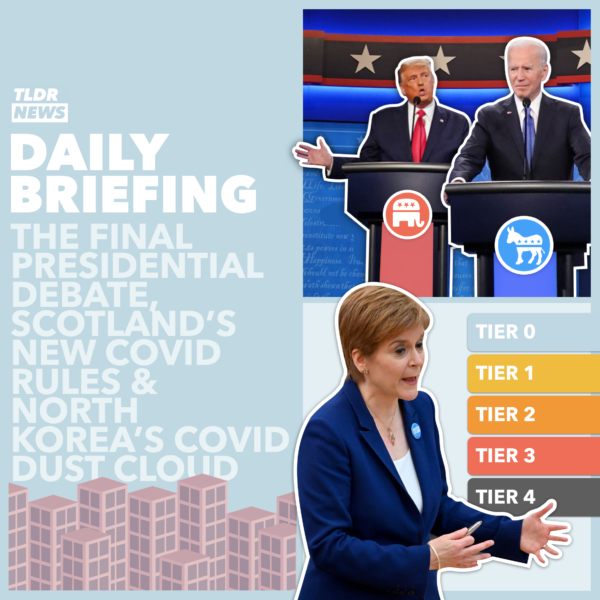 In US news today, the final presidential debate took place last night. This was a more civilised affair than the last joust between the presidential candidates – but there were still heated moments. One such moment was over race.

The President suggested that he had done more than any other president for African-Americans, with the exception of Abraham Lincoln. Biden was keen to try and shut down this opponent’s argument by stating that Trump’s comments on race gave him “a dog whistle about as big as a fog horn”.

Another particularly heated moment in the debate was about the children who had been separated from their parents at the border and have yet to be reunited with them. Trump tried to downplay this by claiming that people were being brought over the border by “coyotes and cartels” and saying that they “so well cared for”. While Biden refuted this by stating that coyotes and cartels weren’t bringing people over, parents were, before condemning Trump for separating parents and children.

Ultimately though, snap polling suggested that Biden won the debate, which will be a major disappointment for Trump’s struggling campaign. With the former Vice President leading national polling, Trump was certainly hoping this last big chance might help him across the line. That’s not to say that Trump can’t win though, there are still paths the President could take to 270, something we will discuss on the TLDR US YouTube channel tomorrow, but he’s certainly not made it easy for himself.

Despite the tension between the candidates, the moderator received a lot of praise. Kristen Welker managed to keep both candidates to their allotted time and was perceived as keeping the debate more on track than last time. Trump, who’d previously slammed Welker as a liberal (despite little evidence to back this up), took a moment to praise the moderator mid debate remarking: “So far, I respect very much the way you’re handling this.”

If elections are determined by the debates, then maybe Ms. Welkers should run – maybe she’d even get Trump’s endorsement.

If you want to watch our full summary of the debate then be sure to check out the video we posted on the TLDR News US YouTube Channel.

Moving over to Asia, North Korea has implemented a new policy to try and stop its citizens from contracting the coronavirus. This policy is asking workers to stay home in order to try protect them from a ‘yellow dust cloud’ coming from China that could, supposedly, bring the novel coronavirus with it. There doesn’t seem to be much evidence so far that the coronavirus can be transmitted via dust clouds, but seemingly, the North Korean regime thinks otherwise.

They have advised those working in embassies, such as the Russian embassy, to stay indoors and keep windows tightly shut.

This announcement comes against the backdrop of Kim Jong-Un suggesting that the country has no confirmed cases of coronavirus – which is… let’s say suspicious.

In UK news today, it has been announced that Scotland will introduce a tiered system – similar to that of England. Instead of having three levels, though, it will instead have five. The top tier is set to be, effectively, full lockdown.

The breakdown of the new tiers are as follows:

As we mentioned earlier, be sure to check out the TLDR US YouTube channel and make sure you’re subscribed. With election day only 11 days away we’re stepping up our coverage and you don’t want to miss out. Also make sure to keep an eye on our TLDR Daily YouTube channel, because there might be something very highly requested landing tomorrow…