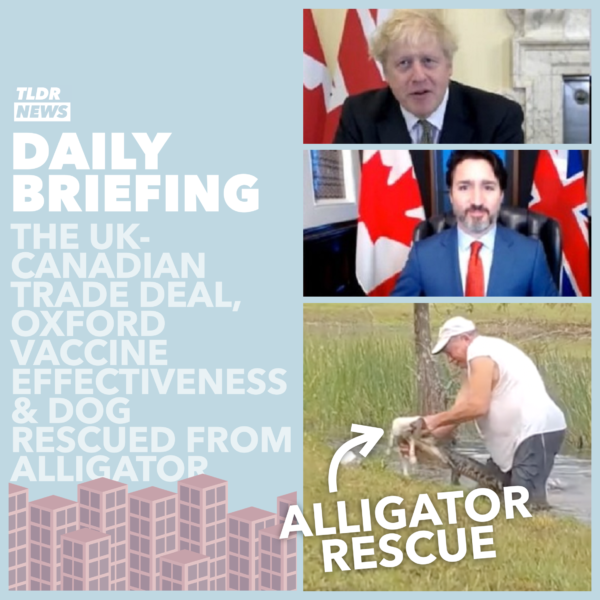 November 23: The UK-Canadian Trade Deal, The Oxford Vaccine Joins the Race and A Rescued Dog

Next Monday is the 100th episode of the Daily Briefing, so to celebrate we’re doing a livestream that goes through the 100 weirdest, craziest and funniest news stories of 2020. If you want to watch it, click the link in the description and hit the bell to be notified when the event goes live. Also if we hit 20,000 subscribers before Monday there will be a bonus surprise, so be sure to subscribe. Thanks for your support!

In the first story in the Daily Briefing today, we look back to a story from Saturday (we know, it’s not something we normally do, but it’s important). This is the news that Canada and the UK have agreed to a ‘comprehensive’ deal that allows trade to remain fairly similar to how it is already – meaning that when the UK officially leaves the EU at the end of the year, the UK Canada relationship should carry over pretty much as it is.

It should be noted, though, that what has been negotiated is simply an “agreement in principle”. Mr. Trudeau stated that a fully comprehensive trade deal may take several years to negotiate. Although this clearly may take a bit of time, this first agreement in principle is a step in the right direction. In fact, even Labour’s shadow international trade secretary, Emily Thornberry, signalled her support for the agreement, stating that it was “necessary”. Necessary is the word a number of people might use, with some arguing that this deal, which merely carries over existing terms the UK already benefited from, isn’t exactly the most impressive second deal announcement from the government considering how little time there is left. As it stands the only deals the UK has when leaving the EU are with Japan and Canada, with the Canadian deal mirroring the exact access the UK already had and the Japan deal increasing access slightly as we discussed in a video when it was first announced.

However, this will be seen as a key deal by many in government. It is estimated that exports in goods and services from the UK to Canada amounts to about £20bn each year. While this is good news for the UK government, however everyone can agree that more work needs to be done in order to finalise additional trade deals before the Brexit transition period ends on the 1st January – otherwise we could see a choppy start to 2021.

We will update you as soon as we find out more about the process of negotiations with  other nations.

The Oxford Vaccine Joins the Race

In the second story today, we stay in the UK to look at the news about the Oxford vaccine. While we have heard lots in the last few weeks about Moderna and Pfizer’s efforts, and their 95% efficiency, we have not heard much from Oxford.

This is likely because they had not finished their clinical trials, and therefore, the efficiency of their vaccine was not known. However, it has today been announced that the vaccine has been shown to be 70% effective. This, though, is with some caveats.

The scientists are currently looking into why this is.

These factors could make the Oxford vaccine preferable to governments who are desperately looking to purchase vaccines as quickly as possible. Whether this is the case, though, is yet to be seen.

In the final story today, we move to the US to look at a positive news story – because we definitely need one! This is the news that a man in Florida heroically saved a dog from an alligator. He even managed to do this without dropping his cigarette.

This encounter happened when the man was walking his dog. The alligator jumped out of the water and grabbed the dog. After a bit of a tussle, the man managed to free the dog, but at the cost of his hand being trapped in the jaws of the alligator. He eventually managed to free himself.

The dog was okay, and the man had to have his hand and stomach attended to. When asked whether the alligators should be removed from the lake, he replied “they’re part of nature and part of our lives”.