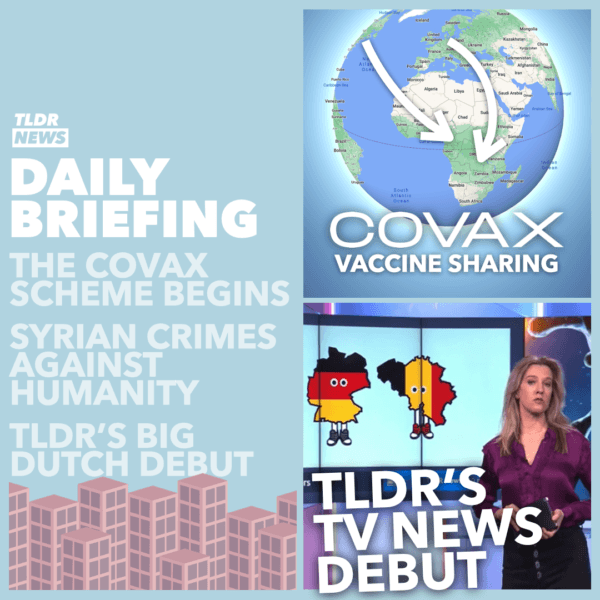 February 24: The Covax Scheme, Crimes Against Humanity, and an MP told to Dress Properly

In the first story today, we discuss the coronavirus vaccine sharing scheme, known as Covax. While it has been clear that wealthy nations such as the US and UK have purchased huge amounts of vaccine in order to inoculate their own populations, questions have been asked about whether it is morally right to do this. Few would argue that there is anything wrong at all with vaccinating those who are vulnerable to severe illness or death from the coronavirus, but some would argue that vaccinating a healthy 20 year old in a wealthy country is wrong when seriously vulnerable people are yet to be vaccinated in developing nations.

It is for this reason that the Covax scheme has been established. By the end of the year, it is expected that around 2 billion doses of vaccines will be redistributed via the scheme from wealthy nations to poorer ones. Additionally, it aims to provide enough vaccine doses to inoculate 20% of the population of poorer countries at no cost to the government. This is a big goal, and it is suggested that it needs another $2bn to meet the targets set for 2021.

The good news today is that the first doses of the vaccine have been distributed via the scheme. In total, 600,000 doses of the AstraZeneca/Oxford University vaccine have arrived in Ghana. Unicef, who are involved in the logistics of the rollout, have described this shipment as a “momentous occasion”.

Hopefully though, this is just the beginning, and we’ll start seeing more vaccine shipments over the coming weeks.

For the second story today, we move to Germany to discuss a Syrian regime official who has been found guilty of crimes against humanity. This is in relation to his actions in the Syrian civil war, which has been ongoing since 2011. The official in question, Eyad al-Gharib, worked for the Syrian intelligence services – specifically in President Assad’s prisons.

He was found by the judge to have tortured inmates, alongside depriving them of liberty. As a result, he was sentenced to four years and six months imprisonment. Quite shockingly, one witness for the prosecution said “Gharib is one man but he was part of an organised machine with orders to arrest peaceful civilians, disappear them, torture them, kill them and hide their bodies in mass graves”.

It should be noted that the reason Gharib was tried in Germany is because he defected in 2012 and applied for asylum.

We can only hope that more war criminals that have committed crimes in relation to the Syrian Civil War are brought to justice in the near future.

An MP Told to Dress Properly

In the final story of the Daily Briefing today, we move to the UK to discuss an MP who was barred from talking due to his outfit. The pandemic has now dominated our lives for almost a year, and in that time, we’ve all had to become accustomed to the new way of working. Largely, this means that meetings will take place on Zoom or Google Meet. Many employers have relaxed their dress code – meaning that people can hop onto calls with their bosses wearing just a jumper and some tracksuit bottoms.

However, this has not been the case everywhere. While MPs may attend the House of Commons chamber for debate from home, they must still abide by the dress codeT. Admittedly, it is a fairly unspecific dress code – but there are some hard rules. Jackets must be worn by men, although ties are not required.

Jonathan Gullis fell foul of the rules when he tried to attend wearing a jumper. The Deputy speaker, Dame Eleanor Laing swiftly called this out, stating “We now go to… we now go… no, I don’t think we do go to Stoke-on-Trent, the honourable gentleman has to be dressed as if he were here in the chamber”.

He then promptly went and changed, and put on a suit and tie. He was allowed to contribute to the debate. This prompts the question, though – should MPs still have to dress formally even when taking part virtually? Or should the rules be the same as for many businesses around the country?

Let us know your thoughts in the comments below.

Before we go too, we thought it worth mentioning that TLDR News is now a sensation in the Netherlands! Okay, maybe not a ‘sensation’, but we featured on a news report on the Dutch national broadcaster.

This is only possible due to the phenomenal support provided to us by our amazing fans – so we’d like to take this opportunity to thank each and every one of you who watches, comments, likes and subscribes. You help us gain credibility and establish ourselves as a serious news network.