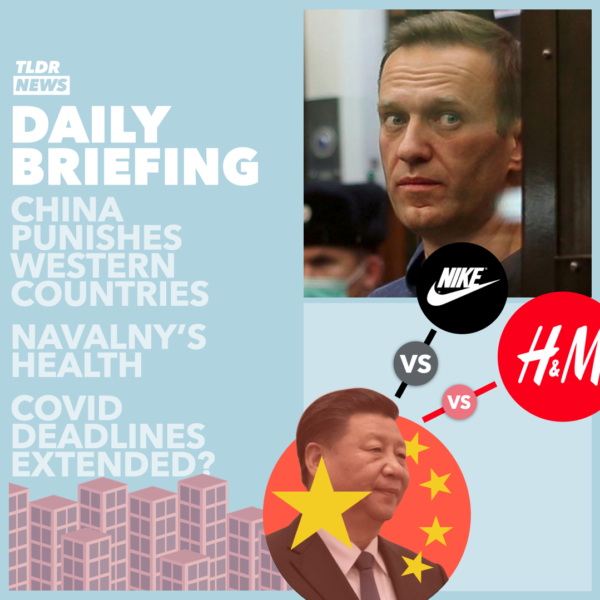 In the first story of the Daily Briefing today, we move to China to discuss a dispute between H&M and the Chinese government. Of all the political disputes we’ve covered on the Daily Briefing, this is the one I think most of us really wouldn’t have expected.

As with most of the disputes with China we’ve covered lately, this one too comes back to the human rights abuses of the Uighur people in the Xinjiang region. Last year, H&M (among other companies, including Nike) made a statement on their “concerns” about reports that Uighur people were being forced to pick cotton. They also made clear that they didn’t source any products from the Xinjiang region.

The recent resurfacing of these comments have led to intense backlash from the Communist Party in China, with certain state outlets publicly defending Xinjiang cotton. In a video posted to Weibo by Chinese state media, it is claimed that cotton production involves a lot of automation, and that Uighur farmers chose to work there (even using the phrase “fought” to work there) for the high salaries.

Other Chinese state media outlets have claimed that the companies have tried to be a “righteous hero”. Many celebrities and larger companies in China appear to be cancelling H&M and Nike due to their comments about Xinjiang cotton.

It seems, then, that the Chinese government is keen to change the narrative surrounding the situation facing the Uighur people. Instead of accepting that there are human rights abuses taking place in Xinjiang, they’re demonising the people calling them out for it. And, it must be said, rather successfully too, considering that the hashtag “I support Xinjiang cotton” started trending on Weibo following this controversy.

This story, then, demonstrates the necessity for governments to be held to account – and their narratives to be checked – by an impartial, investigative media.

In the second story today, we move to Russia to discuss the opposition leader Alexei Navalny. In order to discuss this, some background information is needed. Mr. Navalny is one of the biggest threats to President Putin’s power. He has a large following in Russia, and has attempted to uncover the corruption at the heart of Russian politics. One of the best examples of this was a film he made supposedly uncovering the mansion that President Putin has bought for himself – demonstrating the huge wealth he has amassed while leading Russia.

It should come as no surprise, then, that President Putin is not his biggest fan. Last year, on a domestic flight in Russia, Mr Navalny was poisoned. Some suspect this was on the orders of President Putin. His team transported him to Germany so he could receive treatment. Eventually he returned to Russia, where he was arrested on entry for breaking the conditions of his parole – for crimes he supposedly committed a few years prior (but that many international observers suspect was simply a political conviction.

In the news today, though, it has been reported that his health has seriously deteriorated since being in prison. His aides are claiming that he has serious back-pain and his leg feels numb – to the point that he is unable to stand.

The Russian authorities, though, have stated that Mr. Navalny’s health is “assessed as stable and satisfactory”. When the Kremlin’s press secretary was asked about Mr. Navalny’s health, he also appeared indifferent, stating that: “the health state of convicts and those serving sentences in correctional institutions is monitored by prison authorities, that is their responsibility”.

The situation regarding Mr. Navalny has already caused a rift between the West (who believe he is wrongly imprisoned) and Russia. Whether this new development regarding his health in prison worsens this divide is yet to be seen.

In the third story of the Daily Briefing today, we move to the UK to discuss the vote that is happening this afternoon on an extension of the coronavirus rules. Now, it’s fair to say that when Prime Minister Johnson announced that all coronavirus restrictions could end in June, we all collectively had a sigh of relief. Finally, the pandemic had an end date – we knew when we’d be able to see as many friends and family indoors without legal restrictions. We knew when we’d be able to go to nightclubs again, when we could go to concerts, when we could plan big holidays (even if they are only domestic) with friends, and we knew when – finally – we could stop analysing everything we do to see whether it truly is ‘essential’.

While there has not, yet, been any news that this date is being adjusted – there has been a bit more concern that the world will not just go back to normal in June. The biggest sign of that this week is through the vote happening on the Coronavirus Act. This vote is whether it should be extended another six months.

As you may have noticed, 6 months from now takes us to the end of September – far after the date at which the government has said they’re hoping to lift all legal coronavirus restrictions. Some backbench Conservative MPs have been asking, therefore, why they need such extraordinary powers for such a long period of time?

While the vote is expected to pass, with Labour MPs expected to back the bill, the backbench Conservative group known as the Covid Recovery Group (CRG), led by Steve Baker, seem intent on voting it down. As many as 60 MPs, therefore, could vote against – a number which could have led to a humiliating defeat for the government, if Labour voted against too.

The CRG seems to take issue with the powers the police have to take action against “potentially infectious people”. They also worry that the bill being in law for so long will lead to a “checkpoint society”.

The government would likely argue, though, that they’ve always claimed that June was simply the earliest date that the legal COVID restrictions could be relaxed, and that if additional variants were discovered (especially if they were resistant to the vaccine), then the unlocking could be delayed.

If the unlocking was delayed, or if we needed to be locked down again following restrictions being lifted, the government would likely need to move quickly to deal with the new variant. Without the emergency powers contained within the Coronavirus Act at their disposal, they could be slowed down – and more lives could be lost.

As we said, though, this is likely only the government’s defence of extending the emergency powers. What do you think though? Are these powers necessary for the next six months? Let us know your thoughts in the comments below.