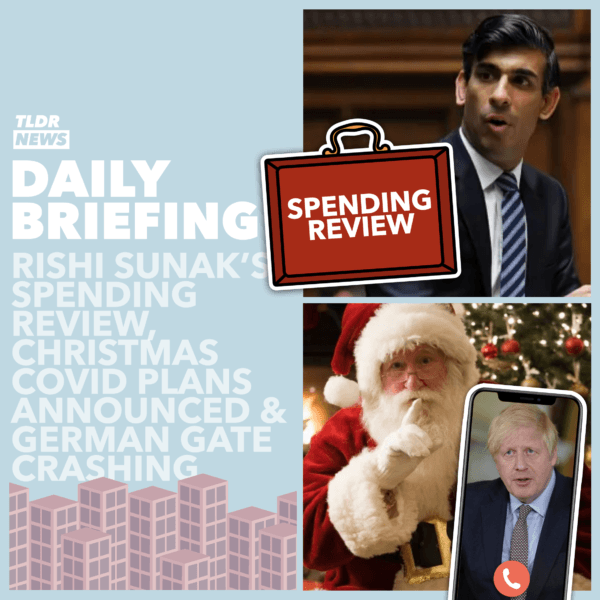 This is the 97th Daily Briefing meaning that Monday will be the 100th episode, so to celebrate we’re doing a livestream that goes through the 100 weirdest, craziest and funniest news stories of 2020. If you want to watch it, click the link in the description and hit the bell to be notified when the event goes live. Thanks for your support.

In the first story in the Daily Briefing today, we look at the Chancellor (Rishi Sunak’s) spending review that was announced to the Commons. It is no surprise that the pandemic has caused a huge amount of economic turmoil – with many jobs being lost and a reduction in pay across the private sector. It should, therefore, come as no surprise that the spending review’s start, with an overview of how the economy is looking and it’s future predictions, was not all that positive.

The Office for Budget Responsibility has shown that the economy will contract by 11.3% by the end of the year – the largest decline in the last 30 years. Additionally, it will take until the end of 2022 to get the economy back to the size it was before the pandemic began. Clearly neither of these things are positive – and are difficult to comprehend. Many watching may be asking exactly how this relates to them personally, and what this means for their finances.

Well, the Chancellor announced that in order to make up for the huge amount of borrowing, public sector wages will be frozen – meaning there will be no increases in pay. There was, however, an exemption. The 1 million nurses and doctors working in the NHS will not see their wages frozen next year. Additionally, those that earn less than £24,000 a year in the public sector will be guaranteed an increase in their earnings of at least £250.

Clearly, the Chancellor is trying to ensure that the lowest earners, and the hardest working in society (nurses and doctors) are not the ones who are paying the price of locking down for the pandemic.

On a different note, though, the Chancellor did announce that overseas aid would be slashed. It has been reduced to 0.5%, as he claimed a higher figure is hard to justify to the British people during the economic crisis we’re currently facing. He claims that he intends the figure to be increased to 0.7% when the fiscal situation allows.

We’ll leave it up to you to determine what you make of the spending review.

In the second story today, we move to England to look at the measures announced by the Prime Minister yesterday that allow families to spend time together at Christmas. These measures were, largely, what we expected (from leaks and reports from journalists over the last week).

The government has announced a plan to allow what are now known as ‘Christmas bubbles’ to meet up in the 5 days between the 23rd and 28th of December. These bubbles will be limited to 3 exclusive households – meaning that a household can be in one bubble only. There is no restriction on the overall number of people in a bubble, and support bubbles will be counted as one household only. In addition to this, households are allowed to ‘split’. In effect this means that a group of 4 young adults living together can go home and form their own bubbles, and then return and live together after the 5 day period.

These rules were agreed to by the UK government and the three devolved governments of Scotland, Wales and Northern Ireland – meaning that the rules will apply across the entire UK and borders shouldn’t be a concern when families reunite.

While some are pleased to know that Christmas isn’t cancelled, just restricted, others will make the argument that the government’s actions have gone too far and will cost lives. While many have made comparisons between the coronavirus and previous world wars, it should be borne in mind that there will be no Christmas truce. The virus will continue it’s indiscriminate killing throughout the winter period. Scientists are fully aware of this, and some have grown concerned that this 5 day window could lead to a third wave.

We will leave it up to you to decide whether you think this is a responsible move by the government. Before we move on though, we thought it would be good to end this story on a positive note. One 8 year-old wanted to ask the Prime Minister about these rules – specifically whether Santa will still be able to visit. He made clear his intention to leave hand sanitiser by the chimney.

The Prime Minister responded by making clear that he made a call to the North Pole today, and can confirm that Santa is still intending to continue as usual this Christmas. He added that the Chief Medical Officer confirmed that Santa could continue if he “behaves responsibly”.

We’ll update you on this as the story develops.

In the final story today, we will discuss the unusual story of a German gatecrasher. Earlier today, a man drove his car (at a low speed) into the gates of Angela Merkel’s Federal Chancellery building in Berlin. On one side of the car a message calling for the end of globalisation politics and on the other side were the words “you damned killers of children and old people”. Both were written in German and in white paint.

Ms. Merkel was not in the building at the time, and it was made clear that the incident, at no time, posed any serious threat to her.

What makes this story baffling is that the same man involved with the crash was involved in a similar incident in 2014. He crashed into the same gate, with a call to end climate change on one side of the car and the words “Nicole, I love you” on the other. Due to both incidents, the police are trying to address whether the incident was politically motivated or whether the individual is suffering from a psychological condition.