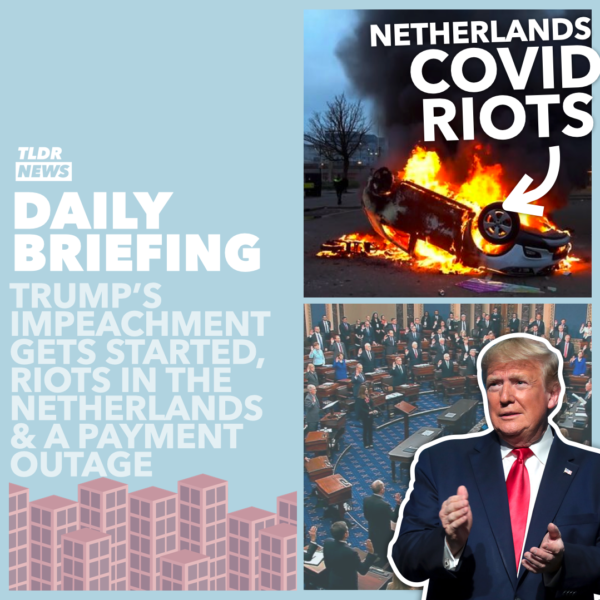 January 26: Trump’s Impeachment, Riots in the Netherlands, and a Payment Outage

In the first story of the Daily Briefing today, we go to the US to discuss, yet again, the former President Donald Trump.

Yesterday, the second impeachment of former president Donald Trump officially reached the Senate. At a formal ceremony, House impeachment managers formally presented the article of impeachment for inciting insurrection to a Senate delegation. The Senate will now determine the rules for the trial, at which the impeachment managers will act as prosecutors. At this stage, we do not know how the trial will work or who may be called as witnesses, but we do know that the trial will differ from Trump’s first in a crucial way.

During the first trial, Trump was the sitting president, and the U.S. Constitution demanded his trial be overseen by Chief Justice John Roberts. Because Trump is no longer president, the Chief Justice is not required for the second trial. Instead, the President Pro Tempore of the Senate, Patrick Leahy of Vermont, will preside. This is a bit unusual, as Senate tradition dictates that the President of the Senate should preside. However, the current Senate President is Kamala Harris, who has a conflict of interest after just defeating Trump and his vice president, Mike Pence, so the duty falls to Leahy as next in line. But now that the formalities are over, the Senate can proceed with the trial in earnest, and we’ll be here reporting on it every step of the way.

Riots in the Netherlands

For the second story today, we have a look at the situation in the Netherlands. Following the threat of mutations of the Coronavirus, the Netherlands has enacted tougher measures on top of the full lockdown it already had in place, including a ban on all flights to and from the UK, South Africa and all of South of America. But without a doubt, it is the curfew between 9pm to 4.30am that is the most impactful measure to date. Not since Nazi occupation in the Second World War was the country subjected to a curfew, and its enactment since Saturday last week to prevent the spread of dangerous COVID-19-mutations has led to a wildfire of riots, plundering and violence in most major cities in the Netherlands.

Monday night was the third night of unrest, with over 180 arrests throughout the country. Fireworks and rocks were hurled against policemen. In Eindhoven, windows of the central train station was smashed and several shops were plundered. Mayor Jorritsma responded with fury referring to the rioters as ‘scum’, and saying:

“It are the Earth’s worst blights that have tried to molest our city here. I’m afraid that if we have gone down this route, we are headed to a civil war. This can no longer be sustained; we would have to deploy the army. Have we sunk so low in this society?”

Fires were lit on the streets of the Hague, cars were overturned in Den Bosch and the Mayor of Rotterdam had to give leave to the police force to deploy tear gas against a looting mob. Prime Minister Rutte also showed his anger with the rioters, stating:

“What’s got into these people? This has nothing to do with protesting: it is criminal violence and we shall treat it as such…this is no fight for liberty”

The curfew is set to last at least until February 10th, but may be extended longer if found necessary to prevent the spread of more infectious COVID-mutations. As the government shows not plans of retracting the measure, violence is expected to persist coming days or weeks.

In the last story today, we move to the UK to discuss a particularly frustrating event that happened yesterday. As I’m sure we’re all aware, cash has been a victim of the pandemic. Very few places still accept it – which when you think about it, makes sense. In a pandemic where a deadly virus can spread by touching objects, it can only be a good thing that coins and notes aren’t being frequently passed between a multitude of people.

However, there is a down-side. The advantage with cash is that it doesn’t stop working. Short of the coins and notes simply disappearing, they will still work. The same, unfortunately, cannot be said for contactless payments – which have seen a boom during the pandemic. And, as we’ve alluded to, yesterday the systems that allow for contactless payment to work went down.

This affected the supermarkets Co-Op and Morrisons. This, in turn, caused the stores to urge customers to pay using cash. As many were, presumably, unable to pay, huge queues formed outside the shops. This was undoubtedly an incredibly frustrating situation for all involved – not least the poor members of staff who had to explain the situation to everyone.