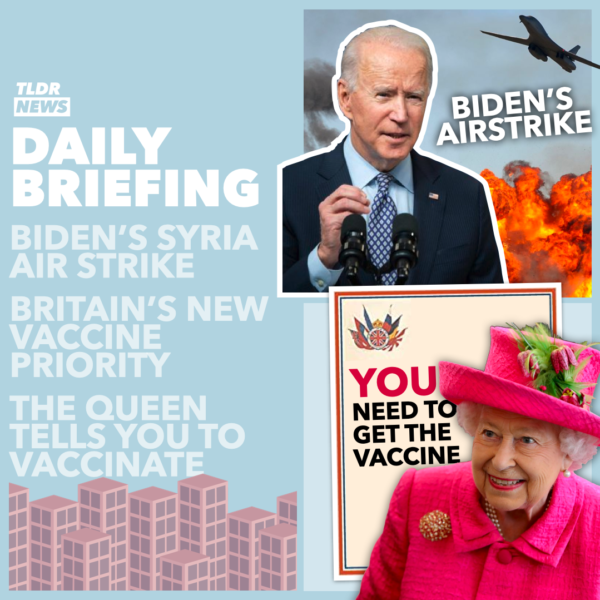 February 26: Biden’s Airstrikes, Vaccine Priorities, and an Intervention from the Queen

Before we start, we’d just like to point out that this is the 150th episode of the Daily Briefing. We’d like to say a huge thank you to all of you who regularly watch, listen, comment, like and subscribe. It’s only because of you that we’ve been able to grow and maintain this series.

In the first story of the Daily Briefing today, we go to Syria to discuss an American airstrike. In Biden’s first military action since taking office in January, the new President ordered an airstrike against Iranian-backed groups operating in Syria.

This strike comes on the heels of a number of attacks aimed at US facilities in the region – attacks claimed by Shia militia groups. These include a rocket attack last week that killed a civilian contractor and injured several more.

Speaking about the US airstrike John Kirby, the Pentagon’s press secretary, remarked that the President’s retaliation had been proportionate. He went on to explain that: “At President Biden’s direction, US military forces earlier this evening conducted airstrikes against infrastructure utilised by Iranian-backed militant groups in eastern Syria,”

The President and others in his administration are clearly hoping that this decisive action will put an end to such attacks with Kurby also commenting: “The operation sends an unambiguous message: President Biden will act to protect American and coalition personnel”

By the way that story was taken from today’s Morning Briefing. For those of you who don’t know, the Morning Briefing is a newsletter we send out every weekday morning sharing the biggest and most interesting stories you need to know about. This means that we recommend a bunch of articles that we’ve really enjoyed over the previous 24 hours. We also write summaries of the news events, meaning you get even more TLDR in your life.

These stories aren’t normally included anywhere else, so if you want to get all the updates then sign up for the Morning Briefing. If you want to get the newsletter every day that’ll cost you £4 a month, or you can sign up for the free tier and get the Briefing only on Fridays. If you’re interested then the link’s in the description & it’s a really good way to support the Daily Briefing as profits from the Morning Briefing help support the Daily Briefing, which at the moment isn’t the most profitable!

For the second story today, we come back to the UK to discuss vaccine priorities. While we aim to be imperial here at TLDR News, on occasion it is hard to present an alternative to the assertion that the government has been successful at something. It’s important to hold the government to account when they have been unsuccessful, which we do, but it’s also important to admit when they’ve done something well, in this case, the vaccine rollout. While we can debate exactly how much praise should be given to the government compared with NHS workers, local authorities and healthcare officials – it’s hard to dispute that the vaccine rollout has been a success.

The UK has already given the first dose of the vaccine to the 15 million most vulnerable people and, in total, about 35% of 18+ year olds in the UK have received their first dose (about 18.7 million people).

As we’re rocketing through the top priority groups, the Joint Committee on Vaccination and Immunisation (JCVI) have drawn up the next priority groups. Some have speculated that essential workers would be next on the list, or perhaps those from BAME backgrounds. Teachers have also been touted as being next on the priority list. However, this has not come to fruition, and the list simply continues through the age groups, with 40-49 year olds next being offered the vaccine (following the over 50s and vulnerable groups), then 30-19, then finally 18-29.

Justifying the move, Professor Anthony Harnden, deputy chair of the JCVI Covid-19 vaccine sub committee wrote that “Focusing on occupational groups would be more complex, risking slower vaccine delivery to the population as a whole and leaving some higher-risk individuals unvaccinated for longer.”

Let’s just hope that we’re able to get through these priority groups as quickly as possible.

An Intervention from the Queen

In the last story of the Daily Briefing today, we stay in the UK to discuss the Queen’s comments on the vaccine. In a rare intervention, Her Majesty has said that people who refuse the vaccine “ought to think about other people rather than themselves”. She added that the vaccination itself was “very quick” and “didn’t hurt at all”.

As we alluded to in the second story, there has been some reluctance in some communities about taking the vaccine. According to royal sources, this intervention comes on the back of Her Majesties’ passionate belief that everyone should be vaccinated. This should come as little surprise though, as in 1957, she made it known to the public that both Prince Charles and Princess Anne had been given the polio vaccine – in an attempt to assuage public concern.

It should be noted here that the Queen, alongside Prince Philip, has received her coronavirus vaccine.