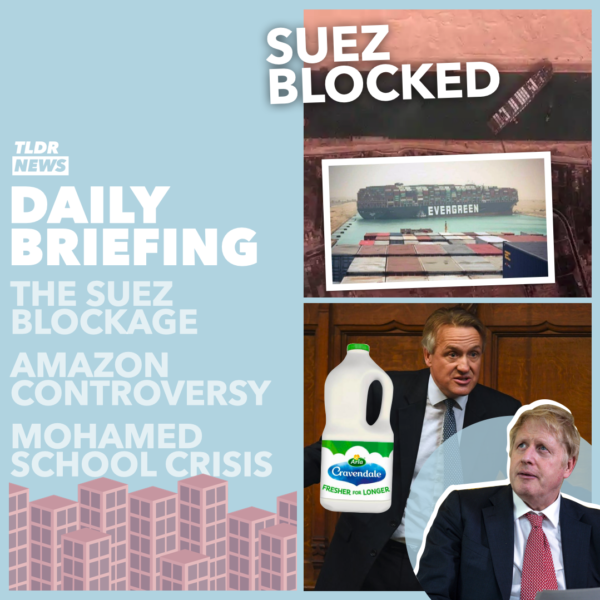 Mar 26: The Suez Blockage, a Leaked Amazon Email, a School Controversy, and a Milk Protest

In the first story of the Daily Briefing today, we move to Egypt to discuss the blockage of the Suez Canal. You’ll likely have seen this in the news throughout the week, so – given there have been some more developments today – we’ve decided to walk you through it.

Before getting into the news though, it’s important to understand the significance of the Suez Canal. The reason it’s so important is because it connects the Red Sea to the Medditerranian – in effect, connecting Africa and Asia. It is an artificial waterway, completed in 1869. Due it’s huge significance for global trade, there have been occasions throughout history where certain countries have tried to take control of it – the most notable in 1956 when Britain, France and Israel tried to stop Egyptian President Nasser nationalising it.

It has been suggested that about 1/10th of global trade passes through the canal every year.

So, with the canals huge significance for global trade borne in mind – we can now discuss what’s happened this week. As you’ve likely seen, a huge 220,000 tonne ship called ‘Ever Given’ has gotten stuck horizontally in the canal, blocking it. Expert dredgers have estimated that it will take multiple weeks to move. As part of this, they have a specialised suction dredger that is able to move 2,000 cubic meters every hour.

This will come as bad news to the many, many boats that have been affected by the blockage. According to experts, there are around 248 boats that are currently part of the backlog.

Some shipping companies have even resorted to talking to the US navy – asking for assistance – as the alternative route prompted security concerns, specifically about piracy. In order to ease the backlog, then, naval warships from many different countries could be deployed to defend the re-routed ships.

This, though, obviously depends on how long it takes to free the ship causing the blockage. The Suez Canal Authority is hoping that high tide on Saturday could be enough to re-float the vessel. We’ll have to see whether this proves successful.

In the second story today, we discuss a leaked email from Amazon that appears to discuss some issues delivery drivers face while on the job. On Thursday, Amazon denied that it had knowledge that their employees – which caused quite the controversy.

The Amazon News Twitter account tweeted “You don’t really believe the peeing in bottles thing, do you? If that were true, no one would work for us”.

This Tweet makes it seem that Amazon doesn’t have any knowledge of the issue – or that it isn’t an issue at all. Well, as we said, a leaked email seen by the Intercept demonstrates at the very least that it has been somewhat of a problem for the company. As the supposed leaked email states:

“We understand that DAs [driver associates] may have emergencies while on-road, and especially during Covid, DAs have struggled to find bathrooms while delivering. Regardless, DAs cannot, MUST NOT, return bags to the station with poop inside”.

Clearly, then, if this email is genuine, Amazon knew that this sort of behaviour happened – and knew that it was an issue. According to a former employee who also spoke to the Intercept, drivers are “implicitly forced to do so, otherwise we will end up losing our jobs for too many ‘undelivered packages’”.

This seems, then, to be the next blow to Amazon who seem intent on demonstrating that their employees are treated correctly.

In the third story of the Daily Briefing today, we move to the UK to discuss a controversy surrounding a school in West Yorkshire. This controversy involves the depiction of the Prophet Mohammed.

A 29-year old Religious Studies is alleged to have shown his class an image of the prophet in a lesson on Monday, causing backlash from parents. This backlash was so big that the teacher himself has had to be put in hiding by the police after he was named online – worrying that he may be in danger.

Additionally, due to the protestors, the school has had to ask students to stay home due while police officers guarded the school. This controversy has garnered much political attention, to the point that the Education Secretary Gavin Williamson has commented.

About the incident, he has said that:

“Schools are free to include a full range of issues, ideas and materials in their curriculum, including where they are challenging or controversial, subject to their obligations to ensure political balance. They must balance this with the need to promote respect and tolerance between people of different faiths and beliefs, including in deciding which materials to use in the classroom.”

What do you think of the Education Secretary’s intervention? Do you agree with him?

In the final story today, we stay in the UK to talk more about the vote yesterday on the extension of the Coronavirus Bill. As we said yesterday, there was quite a bit of reluctance from backbench Conservative MPs to vote for the bill. Although there was a backbench rebellion, it didn’t amount to much, due to the fact that both the Conservative Party and the Labour Party were instructed to vote for it.

So, in total only 76 voted against. This was compared to the 484 who voted for.

Of the 76 that voted against, 35 were Conservative, 21 were Labour, 10 were Liberal Democrats, 7 were DUP, 1 was an Independent (Jeremy Corbyn, who had the Labour whip removed), 1 was a Green MP.

More interesting than the outcome of the rebellion was the contents of the speeches themselves. One in particular, from Charles Walker, caught the attention of the media – due to his rather odd protest about milk:

What do you think about this speech though? Let us know your thoughts in the comments below.