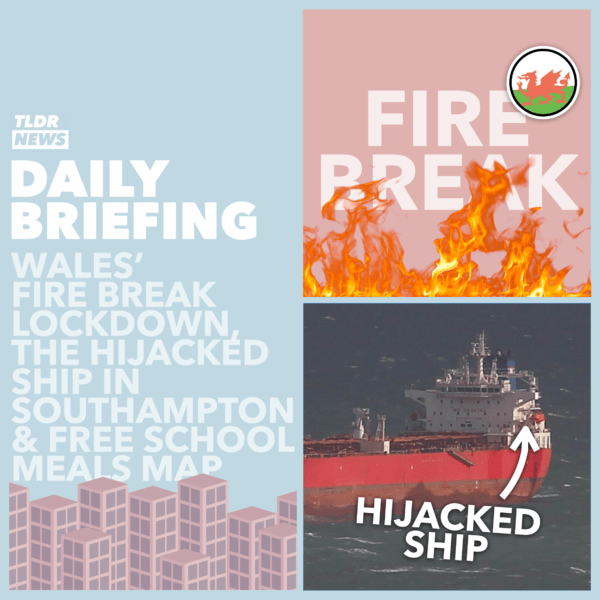 October 26: A Stowaway Situation, The Welsh Firebreak and a Map for Free School Meals

In the first story of the Daily Briefing today, we look at a situation that developed over the weekend near the Isle of Wight.

Near the beginning of October, a huge ship carrying barrels of oil, departed from Nigeria en route for Southampton. On board, there should have been only 22 crew members. However, it was later revealed that there was, in fact, 29 – as the ship had 7 stowaways on board.

Although it is unknown when these stowaways became known to crew members, at some point, the crew attempted to detain them. The incident became violent, and the captain called the authorities in the UK asking for help, claiming that the stowaways were threatening to kill the crew.

The crew secluded themselves in a secure part of the ship while they waited for assistance. As the ship was refused access to Southampton’s port, the ship circled around while at sea. In order to resolve the situation, the Home Office approved military intervention, in the form of the special boat service (SBS).

The stowaways were then taken into custody by 16 members of the Royal Navy.

We’re pleased to report that all members of the crew were safe and well.

Moving back onto your regularly scheduled coronavirus news for the second story today, we go to Wales to look at their ‘firebreak lockdown’. Some of you reading this, may be asking exactly what a ‘firebreak’ is. It’s not one of the new coronavirus terms like ‘social distancing’, ‘asymptomatic transmission’ and ‘household bubble’ that we have all come to understand and use in our lexicons.

Put very simply, a ‘firebreak’ is a temporary lockdown – in the case of Wales, this is for two weeks. However, there has been controversy around this lockdown, as the Welsh government has outlawed the sale of non-essential items. If we were to look at this very simply, it would make sense. The whole purpose of the firebreak is to slow the spread of the virus – and if people were still going round shopping for things like sofas and 4k TVs, the tough restrictions could serve no purpose.

However, the Welsh government has gone further than some would deem reasonable. They have told supermarkets that they cannot sell non-essential items too. This has led to images of clothing isles and home appliances in supermarkets being covered in plastic and boarded off. The Welsh government has given a few reasons for this level of harshness. The first is to ensure that competition remains. So effectively, as electronics stores have had to close, so too should electronics aisles in supermarkets. They have also argued that people shouldn’t spend more time in supermarkets than is necessary, to aid with slowing the spread of the virus, and closing non-essential elements of supermarkets should help with doing this.

However, this has led to some backlash from the Welsh public. In one instance, someone raised the point that a family could buy fancy, expensive, gin but not a coat for their child. Others were infuriated as one branch of Tesco closed the isle selling toothbrushes and sanitary products. These items were, though, later clarified by the Welsh government as being ‘essential’.

On the alcohol point though, it seems a lot of people are especially angry about the fact that spirits are still for sale while childrens products aren’t, to some this has become the ultimate example of absurd government decision making. However I do think it’s overlooked by some that for thousands of people alcohol is an essential item, an estimated 587,000 people are reliant on alcohol in the UK, of which only 18% are getting treatment. So while alcohol might feel like a fun luxury for you, it’s worth keeping in mind other people’s reality during COVID, and the fact that forcing thousands of people to go cold turkey overnight isn’t good for anyone.

Anyway, in protest of the perceived harshness of the rules over essential items in supermarkets, one man went to Tesco wearing just his underpants. When he was turned away by a security guard, a woman filming the encounter said “clothes are non-essential, let him in!”. The security guard did, however, say that it was the government that set the policy, and that grievances should be raised with them instead – also just a heads up, online shopping still exists and no-one complains if you do that in your pants.

A Map for Free School Meals

In the last news story today, we look back at the free school meals controversy that was all over the news last week. While the government voted down an opposition day motion to extend free school meals over half term, many businesses over the country started to offer their food for free to families who rely on free school meals.

But, there was no central system that showed exactly which establishments near you offered such services – until now. Joe Freeman has set up a website called ‘All of Us Together’ that shows all the businesses across the UK that have offered to provide free meals to those families who rely on free school meals. There is a Google Form that business owners can fill in to have their business listed too. There are now more than 1,000 businesses listed.

We bring this story up in the briefing for two reasons. The first is to highlight the amazing work of Joe to make such a system – especially at the beginning when he manually had to list the businesses on a map. The second is to highlight the system to anyone who may need to take advantage of this website over the half term. If this does apply to you or your family, you can find the link to the website in the description.