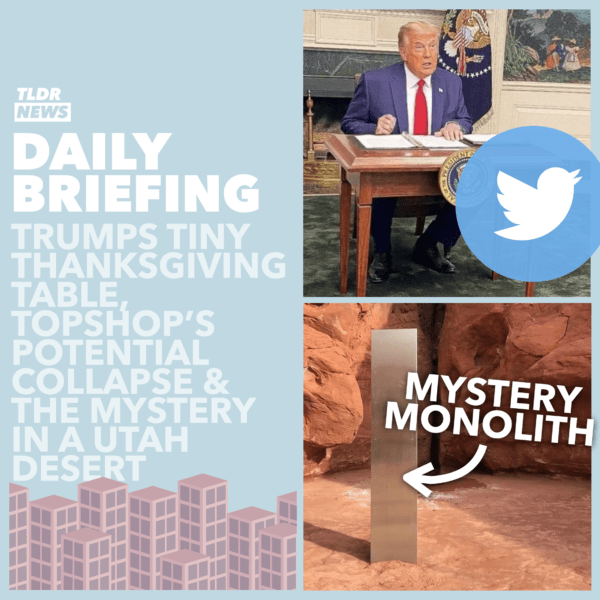 I know you’re probably sick of hearing about it, but Monday is the 100th daily briefing so we’re doing a livestream to celebrate. At the end of this episode I’ll give you all the details you’ll want about the stream – and there’s a big catch you don’t yet know about – but make sure you’ve subscribed to the channel and you stick around so you don’t miss a thing.

In the first story in the Daily Briefing today, we look at a story from the US – and relating to President Trump. We’ll discuss the very interesting, and also highly controversial, press conference the president gave yesterday. This was intended as a Thanksgiving message, but as the president invited questions from the press (and as this has been a rarity since the election results were announced) this ended up being a bit more prickly than he intended.

This is because a few of the reporters, understandably, wanted to ask the President questions about his response to the results of the election. One asked whether the President would leave the White House if he lost, to which he replied “of course”. The exchange got a bit more feisty when the reporter tried to interrupt the president, with Mr. Trump replying “don’t try and interrupt me, you’re just a lightweight, don’t talk to me that way, don’t talk to me. I’m the President of the United States, don’t ever talk to the president that way”.

Following this outburst, Twitter cottoned onto the exact visuals of the conference. By this, we mean, they realised the President was sitting at a very very small desk. This alongside the aforementioned outburst, led to Twitter making some jokes. In fact, so many jokes were made, that #DiaperDon was trending on Twitter last night.

This didn’t go down well with Mr. Trump, who wrote the following Tweet:

“Twitter is sending out totally false “Trends” that have absolutely nothing to do with what is really trending in the world. They make it up, and only negative “stuff”. Same thing will happen to Twitter as is happening to @FoxNews daytime. Also, big Conservative discrimination!”

In the second story today, we stay in the US to discuss something strange in the desert. We’re a little late to this story, but we thought as it’s Friday, it might be nice for it to be included. On Monday this week, it was revealed that a metal structure was in the middle of the Red Rock desert in Utah. It was revealed that the block of metal, stuck in the ground, had been there for around 5 years.

Despite the state issuing advice against looking for the artwork – mainly due to it’s location in the middle of a desert – many still tried to find it. A user on Reddit first posted coordinates to the social media site. One of the first to reach the potential piece of artwork was a man called David Surber. It took him only 48 hours. 6 hours of this was spent driving through the night through the desert.

Despite finding the location, David (nor anyone else for that matter) is 100% sure of what the object is. Some are speculating that it is a piece of art, possibly from the late John McCracken or Petecia Le Fawnhawk. The installation is similar to their other works. Obviously some have also speculated that this could be from beyond our world. Because, let’s face it, if you’ve travelled across the universe to a brand new planet, the first thing you’d want to do is place a small piece of metal in a desert.

Anyway, we’ll leave the speculating to other people – including our viewers. Feel free to do this in the comments (I do love a good read of them once the video is published!).

In the last story today, we move to the UK to discuss the sad news that the owner of many retail outlets is on the brink of collapse. It has, sadly, today been announced that controversial businessman Sir. Phillip Green’s company Arcadia has been seeking a £30m loan to keep it operating over the winter period. Unfortunately for him (and those employed by him), the talks with lenders are failing, and therefore more than 13,000 jobs are now at risk.

These potential job losses would come from many of the businesses owned by Arcadia – including Topshop, Burton and Dorothy Perkins.

Some have claimed that some of the businesses were falling behind the times to competitors. For example, Topshop has failed to improve its online store to match that of its competitors and broadly the brands have struggled to keep up with trends. However, this is likely one part of the problem. The big problem these companies are facing, as you’d expect, is the pandemic. The UK is only just about to come out of its second national lockdown in early December. Due to the prevalence of the virus, it’s likely that many will shop online for Christmas gifts. The fact that these businesses are not keeping up in the online realm with that of their competitors may be the final nail in the coffin.

Let’s all hope that for the sake of those who may lose their jobs, some deal is made with Arcadia to keep them afloat.

So finally, as promised here’s a little more information about the 100th episode livestream. On Monday at 6PM GMT we will be streaming live on this channel, and there’s a link below which allows you to click to be notified when we go live. Throughout the stream I’ll be reading through the 100 craziest, weirdest and funniest news stories of 2020 – letting us reflect on a dark year in a slightly less gloomy manner. There’s a catch though. I’ve never seen any of these stories before, all 100 will be fed into the livestream by the Daily Briefing’s writer Ben. Which means things could get chaotic and entertaining when I have to spin this wheel. When it’s spun there will be a special challenge I have to conduct while reading these stories, which could make reading this all without rehearsal significantly harder. Oh and the wheel spins and craziness is all controlled by the audience you can even win huge TLDR prizes, so make sure you’re there as it happens – as watching the recording just won’t be the same. So if you want to be there for the madness then make sure you’re subscribed and that notifications are on.