Home Daily Briefing January 28: Could Washington DC Become a State, An End to British Lockdown, and Dispute over Johnson’s “Non-Essential” Trip to Scotland 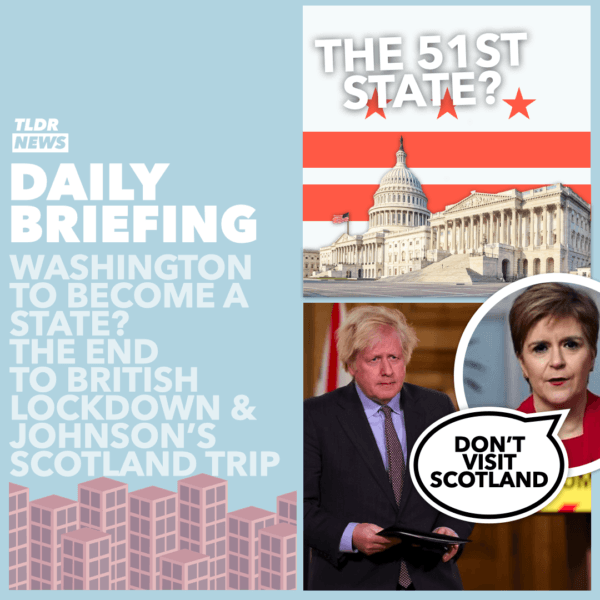 January 28: Could Washington DC Become a State, An End to British Lockdown, and Dispute over Johnson’s “Non-Essential” Trip to Scotland

In the first story of the Daily Briefing today, we go to the US to discuss a bill presented to Congress which aims to make Washington DC the 51st state.

This session’s bills were introduced in the Senate by Tom Carper of Delaware and in the House by Eleanor Holmes Norton, D.C.’s non voting delegate.

Norton says that her bill has over 200 sponsors in the House, indicating broad Democratic support for the measure. Speaker of the House Nancy Pelosi and House Majority Leader Steny Hoyer have committed to bringing the bill to the floor. President Joe Biden also has signaled support for statehood, but the situation isn’t all rosy for the Democrats.

In the Senate, sixty votes would be required to close debate on the bill, meaning all Democrats and ten Republicans would need to support bringing it to a vote. Even if there is somehow enough support to advance the bill, supporters likely do not have the votes to pass it, as there appear to be some Democrats who would vote against it.

We’ll continue to update you as this dispute plays out and if you want more information about the fight for DC & Puerto Rican then check out the video we made about it over on the TLDR US channel.

The End of Lockdown

For the second story today, we move to the UK to discuss the potential end to lockdown. Last night, the Prime Minister hosted a press conference where he informed the public of the governments’ plans to reopen schools in early March – if the coronavirus situation allows. He made no mention of when other restrictions would be relaxed, though.

However, it has been revealed by The Telegraph today that the government has a rough schedule of when certain venues will be allowed to open again. It’s important to stress here that this is purely speculation, and this has not been officially laid out by the government.

Nonetheless, The Telegraph has suggested that schools are currently set to reopen on March the 8th. It has been suggested that a month later, in April, non-essential retail could re-open. Then, a month after that in May, pubs and restaurants could reopen. It has not been made clear whether this means a reintroduction of the tiered system, or whether England will relax restrictions at the same time.

As this is purely speculation about what the government is currently discussing, it’s likely that no decisions have actually been made yet – and that all of this depends on the exact nature of the pandemic in March. Let’s all hope that the vaccine rollout continues to be successful, so we can all start going back to some semblance of normal in summer.

In the last story today, we stay in the UK to discuss the Prime Minister’s trip to Scotland. While many of us have been working from home, some have simply not been able to. People like plumbers, bus drivers, retail workers – and, it seems, the Prime Minister. Today, Boris Johnson has travelled to Scotland to try and emphasise the importance of the Union of the United Kingdom.

The SNP have suggested that the PM’s making this trip due to recent polling which demonstrates an appetite for Scottish independence – with the PM’s visit in an effort to protect the union.

However, the leader of the SNP and the First Minister of Scotland, Nicola Sturgeon, has suggested that the trip may not be the best idea.

When asked about the Prime Minister’s plan to visit Scotland, the First Minister responded that she wasn’t “ecstatic” about it, and suggested that leaders should not travel while restrictions are in place. She pointed out that she had refused to see a vaccination centre in Aberdeen for this reason.

Downing Street has hit back at Sturegon’s criticism, making the point that the Prime Minister must be “visible and accessible” to everyone in the UK. Even Sir. Keir Starmer backed him up, saying: “I’m with the Prime Minister on this one. He is the prime minister of the UK. It’s important that he travels to see what is going on, on the ground”.

But what do you think? Should the Prime Minister have visited Scotland today, or should he have stayed in London? Let us know your thoughts in the comments below.