Home Daily Briefing August 28: Trump at the RNC, Back to Work Schemes and the Japanese PM’s Resignation 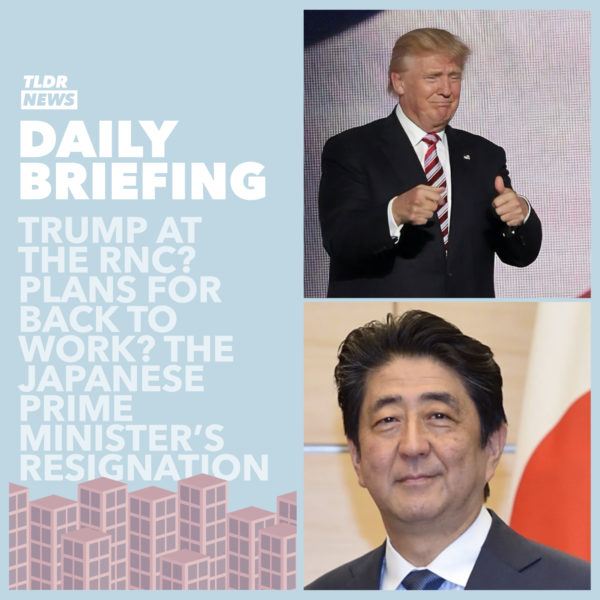 August 28: Trump at the RNC, Back to Work Schemes and the Japanese PM’s Resignation

Donald Trump at the RNC

The first story in the Daily Briefing today relates to President Trump’s speech to the Republican National Convention. While the Democrats stood center stage last week, this week it is the turn of the Republicans. The President has been keen to portray this years’ election as a once in a lifetime opportunity to protect the ‘American Dream’. He mentioned his rival, Joe Biden, more than 40 times – attempting to demonstrate that if Biden entered the White House as president, he would “give free rein to violent anarchists, agitators, and criminals who threaten our citizens”.

While the 2020 presidential election is still months away, both of the main candidates are pulling no punches.

Back to Work Schemes

In UK news today, it has been announced that a scheme will be launched in the coming days to try and get people to return to work. This comes as city centers are taking a particularly bad beating as a result of the pandemic. Without the influx of daily workers, businesses that rely on such people are struggling to make ends meet. Think about the cafes, newsagents, and supermarkets whose main form of income mid-week could, potentially, be from those commuting to and from work.

Although the government is keen to emphasise that return to work is safe, they have ensured that they will not suggest that those who do not return could risk losing their jobs. This comes as a survey has suggested that nine in ten people who have worked at home through the lockdown would prefer to remain at home.

However, some are skeptical. Scottish First Minister Nicola Sturgeon has said that she does not want to see people “intimidated” back to work before it is safe to do so.

Exactly how this government campaign could work is yet to be seen.

In world news today, Japanese Prime Minister Shinzo Abe has announced his resignation. This comes as he now feels that, due to his failing health, it would be best for someone else to take over. He has battled with a bowel condition for a number of years, resigning from his role as Prime Minister over it once before, in 2007.

Abe has apologised to the people of Japan for failing to complete his term in office. He has made clear, though, that he would remain in the role until a replacement can be found.

His successor is not yet clear, although a leadership contest has been triggered following his resignation.