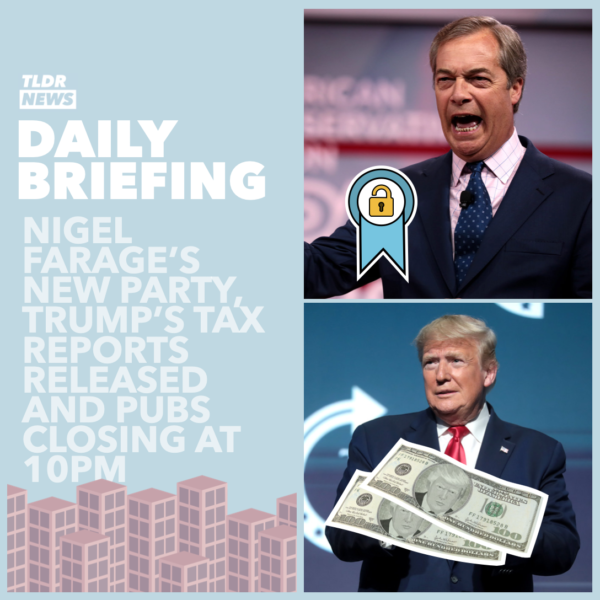 The first story today comes as local lockdowns are being increasingly used across the country to curb the spread of coronavirus. While many are accepting the new restrictions and abiding by them, some are growing tired of what they see as authoritarian tendencies from the current government. One such person is Brexit Party leader Nigel Farage.

While it is possible that Mr. Farage is expecting that the current lockdown measures could still be in place in some form in 2024, it seems far more likely that he thinks an election could be held before then. This belief would likely come from the current speculation of an early resignation from Prime Minister Johnson.

More likely still is that Mr. Farage knows that the party he forms may not contest a General Election any time soon, if ever, and instead it simply exists to put pressure on the Conservative government – through support in opinion polls and newspaper coverage.

Exactly what comes of this proposed party is, as yet, unknown.

In US news today, President Trump has had his tax returns published by the New York Times. This has been huge news, as it was reported that he paid only $750 in both 2016 and 2017. In fact, over the last 15 years, it has been reported that in 10 of them he paid no federal income tax at all. It has been suggested that the way that the President managed to avoid paying tax in these years is by reporting losses.

This is certainly not a good look for the President, as he is due to have his first presidential debate with his Democratic rival Joe Biden in the coming days.

As the New York Times did not publish the documents, the claims cannot be verified. They claim they are doing this in order to protect their source.

The President has refuted these claims as “fake news”.

In other UK news today, it has been revealed that the curfew on pubs and restaurants was not a suggestion made by SAGE (the Scientific Advice Group for Emergencies). In fact, a SAGE member has, today, suggested that the 10pm rule may even be “counterproductive”.

The reason this rule may not be as effective as the government had hoped is because many of those leaving the pub at 10 may feel compelled to go to someone else’s house – where social distancing may be harder to achieve – or they may go and form a big queue at off-licenses.

Exactly what will happen in relation to the 10pm rule is yet to be seen.