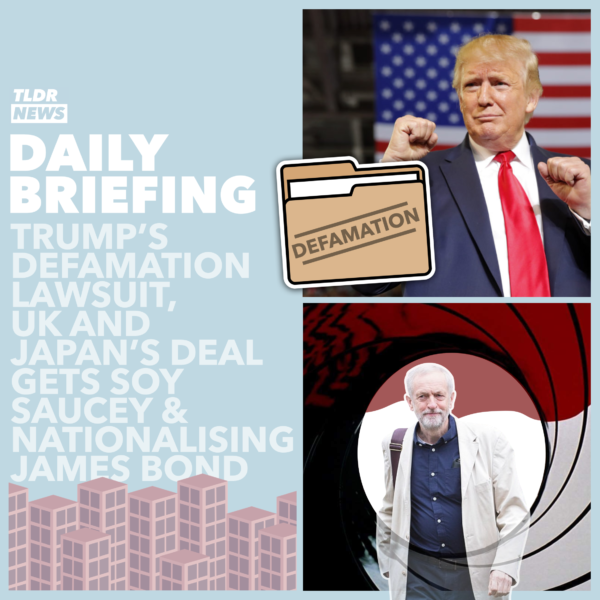 In the first story of the Daily Briefing today, we look into the defamation case related to the President. Yesterday, Lewis Kaplan, a federal judge in the Southern District of New York, handed another major blow to President Donald Trump. In a 61-page opinion, Judge Kaplan ruled that the U.S. Department of Justice could not take over the president’s defense in a defamation suit against him. Writer E. Jean Carroll published a book excerpt in 2019 accusing Trump of raping her in the 1990s. Trump, who was president when the excerpt was published, denied the allegations and accused Carroll of fabricating the incident. Carroll then sued Trump for defamation.

Judge Kaplan likely will need to resolve the rape question during the defamation case, but he limited this ruling to if the DOJ can intervene. In many cases, the DOJ can defend a federal employee from suit and even block the suit because of sovereign immunity. However, Judge Kaplan ruled that the president is not considered an “employee of the government” under the Federal Tort Claims Act and, even if he were, his potentially defamatory statements were not related to his job. This ruling prevents the president from leveraging federal power and sovereign immunity against Carroll, likely ensuring the case will proceed to a full trial.

A Debate About Soy Sauce

Heading to the UK for our second story today, we look at a debate that involves The Great British Bake Off and The Department for International Trade. In one of the tasks on Bake Off last night, the contestants appeared to use a lot of soy sauce. Clearly, someone in the Department for International Trade saw an opportunity to use the mass appeal of Bake Off to try and demonstrate how successfully the Department is negotiating trade deals. They tweeted the following:

The bakers used a lot of soya sauce in the first challenge on #GBBO, so it’s a good thing it will be made cheaper thanks to our trade deal with Japan 🇯🇵

This tweet sparked outrage for a few reasons. Firstly, they misspelled soy sauce – adding an extra, unnecessary, ‘a’. Secondly, it implies that the deal done with Japan is better than the current arrangement under the terms of the EU-Japan free trade deal. Under such a deal, soy sauce is subject to no trade tariffs. So, the deal could match the current arrangement the UK has with Japan, but it couldn’t be “cheaper” as claimed.

However, the department hit back, and claimed that what they meant was soy sauce would be made cheaper than if the UK was left to trade with Japan under World Trade Organisation (WTO) terms.

Either way, some have claimed that this tweet made the department look deceptive, as this was not clarified in their original tweet. We’ll leave it up to you to decide whether the tweet was clear and accurate or unclear and deceptive.

Regardless, who’s excited about the Soy Sauce, we all know it’s the malt which we’re truly excited about – and if you agree with me you can grab yourself some new MALT merch.

In the last story of the Daily Briefing today, we look at the 25th installment of the James Bond film franchise. Although it was originally set to release in April this year, the film was delayed due to, well, the pandemic. In a move that can now be classified as ‘overly optimistic’, the studio set the new release date as the 12th November 2020 – presumably thinking that the pandemic would be over by then. As it unfortunately isn’t, and this briefing is still being written and recorded in bedrooms and home offices – not the TLDR office. Because of this fact, the studio has been hit with a hard question – how do they distribute the film? Officially, the film has been delayed again until mid 2021, but there is no guarantee that the pandemic will be over by then.

Another option that was explored was selling the rights to distribute the film to an online streaming service, such as Netflix. The figure that was suggested by the studio for such a privilege was a whopping $600m. As yet, there is no further news that any streaming service has agreed to the figure.

However, a person from Coventry – whose identity is unknown – has started a GoFundMe page to try and raise the sum. This would then be used to purchase the distribution rights. In fact, commenting on the plan, Stuart Heritage (a Guardian journalist) jokingly suggested that as there is 65 million people in the UK – we could all chip in £10 and ‘nationalise Bond’. The film could be played on BBC One on Christmas day, and we could regain some of the money by selling rights abroad.

While this plan is an obvious no – not least because people like my Mum would refuse to chip in – there is still a possibility that the Netflix logo and infamous double knock could be the first thing we see and hear when sitting down to watch ‘No Time to Die’.