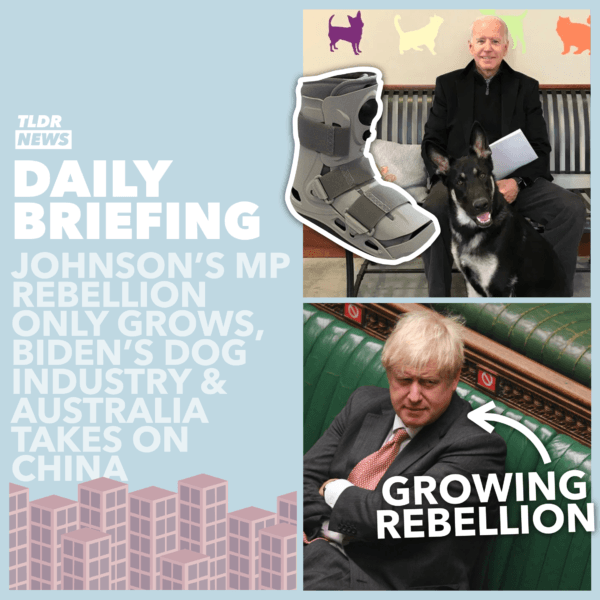 November 28: Biden’s Dogs, The PMs MPs, and Some Fake News

It’s the 100th episode of the Daily Briefing! So to celebrate we’re hosting a big livestream this evening where I’ll be running through the 100 weirdest, craziest & funniest new stories of 2020. It’s not just the news stories either it’s also a whole bunch of tasks and challenges like me reading news after eating incredibly spicy chicken, reading the news backwards or guessing stories based on the headline, it should be a lot of fun! You can watch the livestream by clicking the link below.

In the first story in the Daily Briefing today, we look at a story from the US. This is the news that President-Elect Joe Biden fractured his foot over the weekend while out playing with his dogs.

It has been widely reported that when Mr. Biden enters the White House in January, he won’t only be taking his wife Jill, but also his two German shepherds. Luckily for the incoming president, this incident took place following the intense months of campaigning in the lead up to the 2020 presidential election. This is lucky as, if it did happen in these months, it could have set his campaign back – especially considering that his age and potential frailty was a key criticism from his opponents.

The President-Elect was okay following the fall, although he will likely have to wear a walking boot for a few weeks. The fracture was only small, and nothing serious.

The current President tweeted “Get well soon!” in reply to the news. In the increasingly polarised political world in which we’re living it’s good to hear opponents wishing each other well. It was only last month that Mr. Biden wished Mr. Trump and his family well when he was diagnosed with COVID-19.

It goes without saying, but all of us here at TLDR also hopes the President-Elect recovers soon too!

In the second story today, we move to the UK to discuss the ongoing coronavirus pandemic. For those who are regular viewers/listeners/readers of the Daily Briefing, you’ll know that the Prime Minister has been battling with his own MPs for the last few weeks to try and get them to rally behind the new coronavirus rules – with a number of his own Conservative MPs growing increasingly concerned by the government’s decision.

This issue for Johnson has only consolidated is the creation of the coronavirus recovery group – led by a former chief whip. The group is composed of Conservative MPs who are sceptical of future lockdowns and coronavirus restrictions, a group who could well vote against Johnson and the government’s future proposals. Some of the MPs just inherently dislike the limitations that lockdowns place on individuals and businesses while others just want to see more information about why the government’s deciding to lockdown – they want to examine the data & the science closer before proceeding.

This is worrying for Johnson because it could make passing coronavirus legislation harder, but the group is also a threat to his broader premiership. This group’s actually working, in a similar way to the European Research Group who arguably killed Theresa May’s Government

The reason we’re discussing this today is because the Prime Minister seems to be trying to offer the coronavirus recovery group things, such as more data on why decisions are made relating to restrictions, in order to get them behind the upcoming vote this week on the new tiering system. It has been speculated that around 70 Conservative MPs could vote against the Prime Minister this week – getting into the territory of needing to rely on the opposition to pass the restrictions into law.

Having said this, it’s likely that the opposition will vote with the government, as they broadly are in support of coronavirus restrictions. The reason this is big news is because the rebellion is likely to only grow as restrictions are extended over the coming months.

We’ll have to wait and see how large this week’s rebellion is.

In the last story today, we talk about the increasingly strained relationship between China and Australia. Last week, we reported on the story of ‘warrior culture’ in the Australian special forces – with a report last week accusing some members of the special forces of war crimes. While this report was published by authorities in Australia and was substantiated, some claims made by China on social media over the weekend were not.

The Chinese government posted an image of an Australian soldier standing with a knife next to a child. The issue is that this image is fake, and is based on an unsubstantiated claim that Australian forces killed two 14-year old children in Afghanistan.

The Australian Prime Minister responded by claiming that Beijing should be “utterly ashamed” of the “repugnant” picture. He proceeded to brand the image as “disinformation”.

This will likely increase the tension between the countries.

Before we go, one last reminder about today’s livestream. We’ll be going live at 6pm GMT and Ben and I will be running you through 100 weird and wild stories from 2020. Not only that we’ll also regularly be spinning the wheel making my job harder & letting you see the madness play out. The link to the livestream can be found in the description.