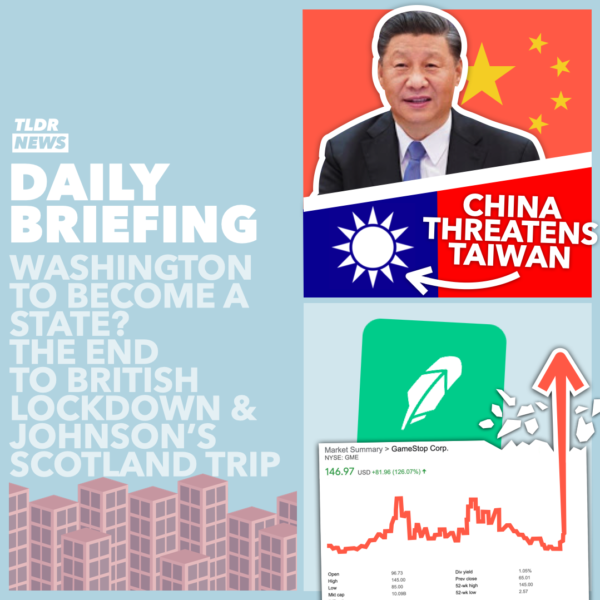 In the first story of the Daily Briefing today, we go to Asia to discuss the heightening tensions between China and Taiwan. In the last few days, China has stepped up its military intervention in Taiwan – a region it considers a breakaway province of China. Taiwan sees things differently, though, and instead believes that they are an autonomous sovereign state.

China has claimed that their increased military presence is the result of provocation and foreign interference. They are keen to demonstrate to Taiwan that their military threats should be taken seriously, with the Chinese defence minister saying on Thursday:

The US were clearly watching this increase in rhetoric, as President Biden’s Pentagon press secretary, John Kirby, commented on the situation. He claimed that the situation is “unfortunate”, and that the Pentagon “sees no reason why tensions over Taiwan need to lead to anything like confrontation”.

Let’s all hope that the situation can be resolved diplomatically. The last thing 2021 needs is a war with China.

In the second story today, we move to the US to discuss the latest developments in the Gamestop stock market story. We first covered this issue over on the TLDR US channel so if you’re unfamiliar with the story you can find all of the background over there.

In the last few days, numerous trading platforms including Robinhood halted trading of stocks popular with the wallstreetbets subreddit, including $GME, $BB and $AMC. Robinhood allowed users to sell, but not buy, $GME, causing a drop in price. Although it’s not particularly clear, it seems partly caused by the fact that clearing firms were requiring more collateral for trades. There’s also been speculation that Citadel, the NYSE’s largest market maker, put pressure on Robinhood.

Citadel recently put $2 billion into hedge fund Melvin Capital, which holds a large short position in $GME. Robinhood also makes a large part of its revenue from selling user trade data to Citadel. Finally, Citadel are also responsible for a whole load of $GME in-the-market options, many of which apparently mature on Friday. Citadel have denied any involvement. Nonetheless, at the time of writing $GME has rallied back up to over $400 a share, and everyone from Ted Cruz to AOC is calling for the SEC to investigate.

This story is still ongoing, so we’ll keep an eye on it and update you if anything big happens in the coming days – and there’s set to be another full follow up video on the TLDR US channel soon, so make sure you’re subscribed.

In the last story today, we move to the UK to discuss a protest – specifically about the HS2 project. For those of you who don’t know, HS2 (or, high-speed 2) is a proposed railway that would connect London to Manchester – we’ve actually done a video about this before too. It’s a highly controversial project, mainly due to it’s huge cost and impact on the environment.

These significant criticisms of the project have caused many environmental groups to launch protest movements with the sole purpose of stopping HS2 ever being completed. The latest of these protests is an attempt to create a tunnel at Euston under the next building location.

The tunnel is about 30 meters long, and has reportedly taken months to dig. The National Eviction Team claims that it is in danger of collapsing, and could be putting lives in danger. They also added that there was a flood risk.

It may take the authorities a little while to remove the protestors – who are clearly risking their lives for the protest. Exactly when building can resume, then, is as yet unknown.